The overseas grape season did not start smoothly this year. "All the importers expected the European season to end in time. Many players also started on time with imports of Brazilian grapes to have stock in October", says Robert van Melle. He is responsible for the grape sales at the Dutch company, Origin Fruit Direct.

"Because if the favorable exchange rate, people from Brazil did not mind sending extra volumes. They also had a very good season last year. Unfortunately, the European season lasted a while longer than expected. The demand for white, seedless grapes only started in November. By then, we had been getting overseas grapes in for four to five weeks already."

"All in all, things went reasonably well, but the prices level was lower than last year. Then, the price for a punnet was still about EUR18 or 19. We are EUR2 or 3 under that now", says Robert. "Subsequently, the Peruvian fruit was delayed coming onto the market. That was not a bad thing given the situation on the market.

"Peru is, however, sending far larger volumes to Europe. Volumes are three times as high as last year. Peru planted a substantial number of extra white, seedless, grape vines. They are also losing out on demand from the United States. There, they have ample grapes from California. That is why the extra volumes are all coming to Europe." 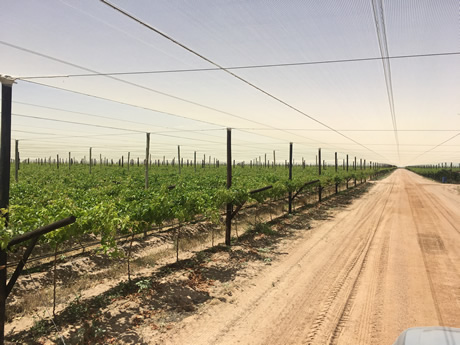 Robert took this photo two weeks ago in Piketberg, South Africa. The new Lac du Soleil vineyard is now in its second year of production. It has new varieties such as Sweet Globe and Arra15.

"I expected the punnet prices to remain at a reasonable level of around EUR15-16 until Christmas. But, now the market has come under pressure. This is because more punnets have arrived than expected. The first grapes from Namibia also arrived last week. The early Namibian production, as well as the Orange River (South Africa), were delayed for the first part of the season", explains Robert.

"Instead of the usual six week period, the fruit is now coming in four weeks. This puts pressure on the warehouses. The mid and late areas in South Africa have not been delayed. This, however, means there will be considerable pressure on the European grape market in the new year. The peak is usually just before or after Christmas. Now, the volumes are arriving in great numbers at a later time."

"It is the Peruvian grapes, in particular, that are currently putting pressure on the market. There are considerable volumes of Sweet Globe and Sugraone on the market. There are quality issues stemming from the flooding two years ago. These have not yet been resolved. Last year, this resulted in more than 50% less supply. Then, however, Brazil could fill the gap. This year, the total supply is sufficient", he says.

"There is a reasonable demand for grapes at the moment. Last week was the first indication that the market is losing ground. This happened last year as well, but then it was just before Christmas. The big question is how the market will relate to this in the new year", concludes Robert.