As the Florida strawberry season gets started, it’s picking up some of the demand for berries from California.

“We’ve got an influx in demand because of the rain in California,” says Gary Guynn of Guynn Family Produce Sales Inc. in Lakeland, Fl., who notes that Florida is only about 10 days into picking. “People who normally switch to Florida this week already switched last week because of that California rain. California couldn’t fill any orders because of it so people turned to Florida.”

While Florida is starting slightly earlier this year, late last week the weather cooled off slightly. “We got cool for us weather—late last week, the nights were in the 30s which slowed things down somewhat,” says Guynn. “Typically at this time of year we’re doubling every time we go to pick in volume. But it didn’t last week because of the weather. Still, we went back to 80 degrees on the weekend and it’ll pick right back up this week.”

Volume on track
For now, volume looks to be on average. “We hope it’s better than last year. Last year, industry wide, volumes were way off,” he says. “The year before last the numbers were really good. Most people were pushing 4,000 flats/acre or more that year. But last year, most everybody was around 2,700-2,800/acre. It was a big difference.” 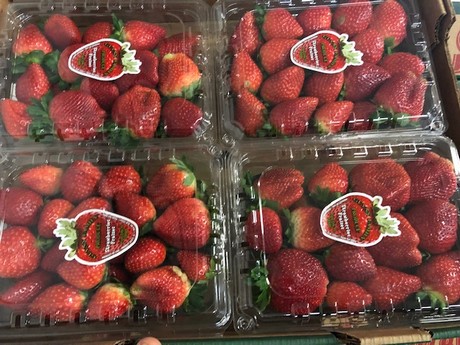 The Florida season generally runs, if it can, until Easter. It also tends to run concurrently with the Mexican season. “Mexico always hurts us but they’re getting going late this year. They’ve had a few weather issues as well,” says Guynn. “That’s our biggest battle. Mexico ships in so many more berries. They’re about 10x as many acres as Florida has so they do so much more. And most of the processing has also moved down there.”

High pricing to cool?
With strong demand, which should stay strong for the holiday season, and the season just getting started, pricing is relatively high for now in the mid $20s. This is average for this time of year, says Guynn. “People don’t buy that many when they’re $4.99-$5.99 in the store but restaurants and foodservice do because they’re on their menus,” says Guynn. “And as soon as our volume comes in, the prices will drop to keep movement going.”