A lot of data is available, particularly genetic data about crops, but data can also practically be picked out of the fields. Soil structure, development of the crop, or even better, of each individual plant. “We’re headed for a situation in which the fair average will be replaced by getting the best out of each individual plant,” says Mike Poodt of Rijkzwaan. During the EU Fresh Info Forum, he talked about the developments, while Koen van Boheemen (WUR) and Mathias Eberius (Zosso Group) gave presentations about the topic. 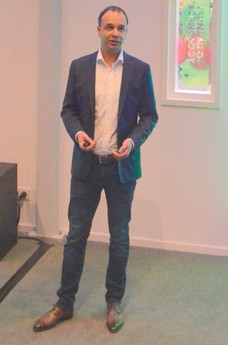 Just using Google Maps and a soil scan, a grower can get a lot of information about the soil. “For our testing fields we use drones that measure the individual crops,”Mike says. The images of these drones provide a wealth of information. The photos are heavy enough to make an online tool necessary to make the images available to employees. “We can now inspect the field while sitting at our desk to see how the crops look before going into the field.”

From the WUR, Koen van Boheemen works on similar applications. Satellite data, sensors and robots that are on the rise, the technology exists, but how to make all of these technologies effective in fields? Koen talks about the applications that already exist, such as pesticides, manures or water being applied based on data. With soil scans, a grower can decide which part of the area needs additional attention and where the crops grow well. 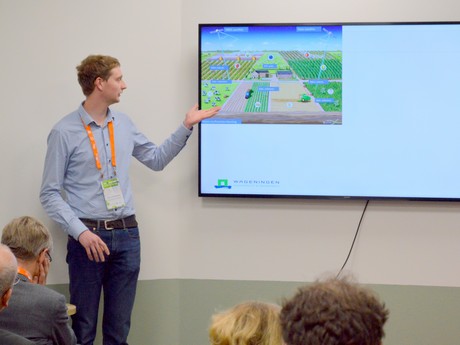 One step further is to continue automating all of that information. For example, as soon as a sensor detects an illness, it can send a notification to nearby growers so they can take precautions. Or a completely automated system that sends the information directly to a robot, which can immediately take action. These technologies are being tested in practice by the NPPL (the Dutch national testing ground for precision agriculture). “The technology exists, but it doesn’t always work as planned,” Koen says. That became apparent when a test was conducted among various growers. The system didn’t work as expected regarding the connection between the systems, so that the entire test failed. 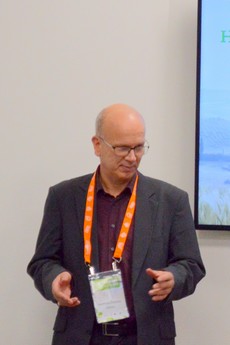 Mathias Eberius presents a technical solution to eradicate weeds and make ploughs superfluous: electrocution. “Weeds are becoming more and more resistant,” he explains. “We have to prevent weeds from taking over the fields. According to Mathias, ploughing isn’t the solution. Ploughing has too much impact on soil life. He presents the XPower, a system that electrocutes the plants using high voltage. The result can be seen between five minutes and fifteen hours after the treatment, depending on the weather circumstances. “The XPower has no impact on soil life,” Mathias says. “It’s an alternative to pesticides.”

“Robots will change horticulture,” Mike concludes. Labour costs in Europe are a considerable part of production costs. Robot can lower those costs. “We’re now trying to combine all of these technologies in one machine, so that a very advanced robot is created, but productions are very varied.” He argues dividing the various tasks among multiple robots, so that each robot is a bit less advanced. For instance, a robot scout that follows the production and sends information about the harvest to a harvesting robot and information about diseases to a maintenance robot.