Argentina: Blueberry export volumes are behind compared to last year

A total of 718 tons of Argentinian blueberries arrived in different markets last week. This was published in the weekly crop report. “Another 796 tons are shipped by boat, but will arrive at destination in week 51. From this 728 tons, 45% is received by the US, 30% is received by Europe and 13% to the UK.” 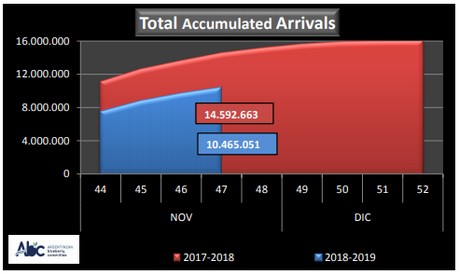 As you can see in the graphic above, up till last week the volumes arriving in different markets are much lower compared to the volumes in the same week last year. Up to week 47, the total accumulated arrived volume in the previous season was 14.592.663, compared to only 10.465.051 of this season. The biggest difference can be seen in the numbers of the arrivals in the United States. Up to week 47, the total arrived volume was 5.590.499 compared to 9.130.772 last year.

The Argentina Blueberry Committee (ABC) participated in the first edition of “The week of Agriculture and Food: future challenges for Latin America and the Caribbean”. The event was held in Buenos Aires, during which different themes have been discussed such as, school feeding systems, agricultural and climate change, rural poverty, food loss and waste, and natural disasters.

During the event the main aspects of the promotion campaign for fruit and vegetable consumption were highlighted. Together with different actions carried out by the national government in order to promote the local production of fruits and vegetables. The ABC Internal market committee stated: “There is great potential in the domestic market. Therefore, we are committed to working together with the government and the other institutions in order to enhance the strategy that is being carried out by the private sector.”