Thanos Bobos, the 70 year old president of the Greek cooperative Argeas, has major plans for the future of the company. The assortment has to become more extensive, besides oranges and tangerines, he has already started with the export of strawberries and watermelons as well. Yet he’s also worried about the Greek economy. A more liberal course would be better, according to him. 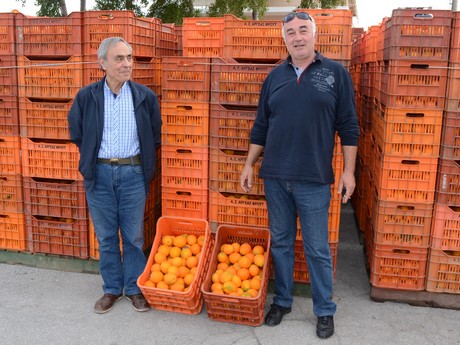 “For us, the season started six days ago,” Thanos says in week 44. Other companies in the region started harvesting citrus ten days ago. “We expect a season that’ll be comparable in yields to last year,” he continues. Last year, however, a large part of the harvest was damaged by frost and hail, so that growers couldn’t harvest the fruit. “We’re not having any problems this year, and the weather has been better. That’s why we’re expecting a better quality and therefore a better year for export.” Thanos estimates the total harvest to be roughly 300,000 tonnes.

The biggest buyers of the fruit are the Balkan countries and countries in Eastern and Central Europe. “Serbia, Slovakia, Croatia, Hungary and Poland,” Thanos sums up some markets. Western Europe is out of their reach. “Transport costs from Spain are lower, and besides, Spain has a larger yield so that the country can export to all of Europe. We have quality, they have low prices.”

Worries about the future of Greece
The Greek sector traditionally comprises of small growers. “Compared to Spain, we’re a small cooperative,” Thanos describes. “We have 100 members and sell about 6,000 tonnes.” Besides, some other cooperatives use the packing opportunities of the cooperative. The season peaks between November and April. Thanos has been in this position for 1.5 years now, and he’s devoted to expanding their assortment. This year, he added watermelons and strawberries to the assortment. “This way, we can use our facility year-round, and we can employ our workers year-round as well,” he explains. He used a major Greek exporter as an example.

The aged manager of the cooperative is worried about the future. The crisis left its marks on Greek society. “Each grower also has another job. The Greek working class has been destroyed and young people are leaving. My own son lives in France,” he says. In total, about 500,000 young Greek people live and work abroad. “There’s no hope here, that’s the consequence of the crisis. We need a more liberal approach and less state interference. That has to change, because it’s catastrophic for the economy. We’re paying taxes, but we’re not seeing anything in return.”

Struggling against traditions
Despite his advanced age, he’s keenly aware of the problems plaguing the sector. “I’m not optimistic,” he admits. The Greek citrus production mostly consists of old varieties, but there’s no money to invest in new varieties. “We’re trying to change the production, but we need more money to quickly make that switch.” That’s not the only problem. Greece is divided in two by a mountain range. East of the mountain range, the weather is dry. “The climate is ideal for the production of citrus, because we don’t have any pressure from diseases, but irrigation is expensive.” West of the mountain range, plenty of water is available, but the citrus has more quality problems.

Citrus is mostly grown in the Nafplio region. Climatologically, the region should also be suitable for the lucrative production of avocados. “We don’t have a lot of pressure from diseases and we have a similar climate as Crete, the production of avocado should be possible,” Thanos explains. “Tradition is the biggest problem. The mindset of the growers has to be changed.” He exemplifies using the potato production, about which a myth exists. Long ago, when the Greek government wanted to introduce the production of potatoes, the seed potatoes were handed out for free. However, the Greek growers weren’t interested in the free seed potatoes. The government came up with a trick: soldiers were sent to guard the seed potatoes. Sentiment suddenly changed and all growers became interested in the seed potatoes. After all, if it’s being guarded by soldiers, it’s probably very valuable.