Start of third South African lychee season for US importer

As the end of November approaches, there are not many choices for buyers looking for lychees in the US. That will change shortly as the southern hemisphere season begins. One US importer of specialty fruits is about to begin their third South African lychee season.

"We are two weeks away from starting our South African lychee program," shared Nick Bernal of Seasons Farm Fresh. "At this time of year, there are really only two players - South Africa and Australia. This will be our third year marketing lychees from South Africa and we continue to see extraordinary growth for the program. The first year, we marketed a handful of pallets to test the market. It was highly successful and we expanded on the program in the second year. In this, our third year, we look to be working with between 40 - 50 pallets a week during the peak of the season. The season will extend from the end of November to the end of January or beginning of February, wrapping up around Lunar New Year."

Seasons Farm Fresh works directly with SA Direct Fruit, who has been the driving force behind the South African lychee program, to market lychees alongside their other exotic fruit offerings. Bernal said, "In South Africa, there is one grower group that controls the export, whereas in Australia each company markets fruit directly. The fruit quality from both countries is outstanding and now after several years we are getting a good feel for the American market. We very much enjoy journeying to the corners of the globe searching for specialty produce and building programs around them." 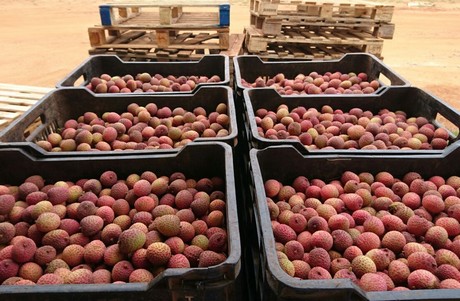 Challenging for US buyers to import lychees
It's generally an expensive venture for US buyers to import lychees from the southern hemisphere. Vast distances for this delicate fruit mean that air shipments are the only practical option for importers. Making life more challenging is the fact that the US is not the preferred market for either South Africa or Australia. These two countries have a long-established and more significant presence in closer markets, namely Europe and Asia, respectively. The Asian market in particular is willing to pay very high prices for lychees.

"South Africa's biggest market is Europe, while Australia exports lychees to markets in Asia," Bernal said. "This makes it more difficult for the US market to import lychees, especially from Australia. Growers in Australia can typically receive extremely high prices in Asia because lychees are considered a prized item there, especially around Lunar New Year. Therefore they are generally discouraged to ship fruit to the United States for a lower price. The extra distance from both South Africa and Australia to the US compared to their other, larger markets adds to the cost for US buyers."

Nevertheless, Bernal noted that Seasons Farm Fresh is seeing excellent growth in their offshore lychee program and said even with the increased amount of fruit available this season, the company is barely able to meet demand. "We ship across the country and most of our fruit goes to retail, as well as ethnic markets," he said. "Our problem at the moment is that we just don't have enough product to meet demand. We've maxed out on sales. Prices have been in the high $30s and low $40s which is similar to previous years. It is a premium product with high costs to grow and ship, and people are willing to pay for it. Every year we are seeing exponential growth and this should be our biggest year ever." 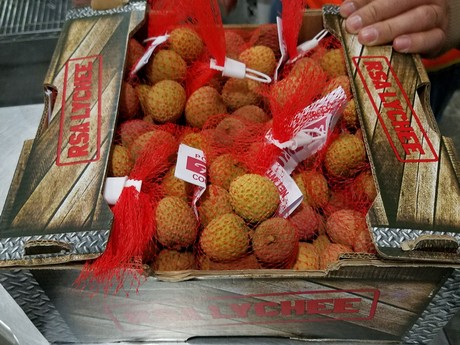 Irradiation "better than previously used methods"
According to USDA regulations, lychees must be irradiated before entering the United States. Bernal explained that Australian fruit is irradiated before departure. South African fruit on the other hand, is sent to a Gateway America, a facility in Gulfport, Mississippi where an irradiation complex has been built. He sees a big future for irradiating fruit, and therefore predicts the Gulfport facility to experience major growth over the next several years.

"At this time, Gulfport is not a significant arrival point for fresh produce arrivals into the United States," Bernal said. "However, there is an increasing amount of fruit being irradiated as it looks to be replacing the use of methyl bromide, which has now been banned in most countries. Irradiation has been around for a long time and it's an excellent technology. We are seeing fruit maintaining quality better as well as enjoying an extended shelf life. It's likely that Gateway America will be expanded and reproduced in many more ports of entry in the United States over the next few years."

Looking ahead
Seasons Farm Fresh is set to continue to expand on their South African lychee program. Not only are they increasing volume, but the company is also testing out new packaging this year to gauge reception and to see whether or not to build on this in the future.

"The last couple of years, we have been shipping mostly 10lb bulk packs to our customers," Bernal shared. "However, this year with the bigger program, we may also do a few pallets of lychees in pouch bags, similar to cherries and grapes and see how the market responds."