Citrus, kiwi fruit, grapes and stone fruit are grown in large volumes in Greece. For export company Balakanakis, these are the four product groups on which the company is built. Grapes and kiwi fruit in particular offer a lot of opportunities for the Greek sector, which is plagued by the after effects of the years of crisis. According to George Balakanakis, the growers need two things: a change of mentality and capital. 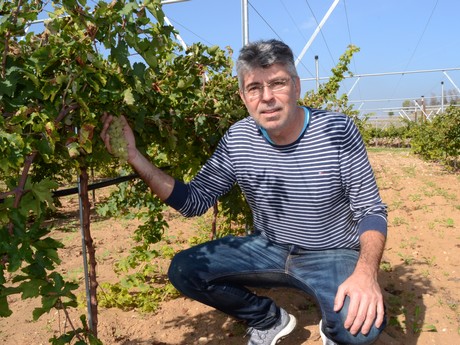 George Balakanakis checks the young grape plants. Next year the first commercial volumes are expected from this field.

In the past, Greece and Italy were the most important suppliers of grapes, with seeds, for the European market. The Greek growers noticed the convenience trend of seedless grapes and switched to this market just in time. “Greek growers brought this trend to Europe. Because we started with seedless grape early, we have a good position on this market,” George explains. With the growing production in Spain, the Greeks gained a competitor.

California as an example for Europe
George sees the grape sector in the US as an example for the European sector. “California is on the market from May to December, and then the import from the Southern Hemisphere starts,” George says. “We should see the EU as the US.” He means the spreading of the seasons. “The Mediterranean should be seen as California. We can supply grapes from this region from May to December. South Africa and India can fill the gaps.” Greece would then take the role of Northern California.

The Balakanakis family company is built on four pillars, and grapes and kiwi fruit are two pillars on a market with a lot of chances. The first pillar in volume is citrus, of which the company exports between 1.5 and 1.8 million boxes annually. Stone fruit is the company’s fourth pillar. The company invests in the production of grapes. Near the office in Nafplio, George shows a field with new plants. The young grape plants aren’t fully grown yet. The first commercial volumes are expected for next year. The company planted late variety Sugar Crisp. 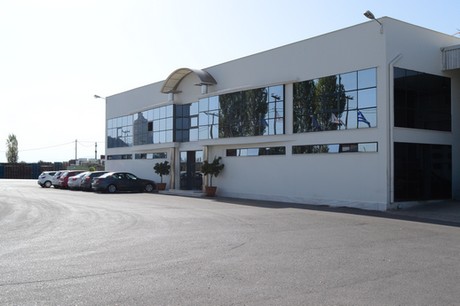 The future is also looking brighter for kiwi fruit. “Greece is an important producer of kiwi fruit on the Northern Hemisphere,” George says. “Kiwis are very important for us.” The green kiwi fruit is mostly grown in Greece at the moment, but the red and yellow varieties also offer opportunities. “I would very much like to have yellow and red varieties as well.”

Aftermath of the crisis years
Last summer, The Greeks closed the EU's emergency loan project. This means the country is now financially independent, but the consequences of the crisis can still be seen. The Greeks need two things for the future: a change in the way they think and capital. “We have to think like the consumer more, and adjust our supply accordingly,” George explains. 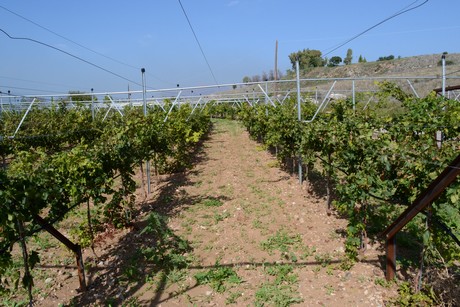 Besides, the growers hardly made any profit in recent years. “It’s impossible to get good margins, because we have to pay more in taxes and premiums. Growers pay 50 to 60 per cent in taxes. If this goes on, agriculture will no longer be an appealing sector to work in. According to the exporter, these raised taxes are the cause of the sector being in bad weather now. “Before the crisis, the sector was in a good condition, and tax tariffs were friendlier.” Nowadays, some growers are up to their neck in difficulties so much that their choices are being able to eat tomorrow or investing in the company. That’s not a difficult decision to make.

The Greek government took care of the tax system during the crisis. Because of this, the burden of taxation increased to nearly 50 per cent. Besides, larger growers have to pay an additional tax of ten per cent for the poor in the country. That decreases the competitive position of the country. “Moreover, there’s no stability in the tax system. It could change at any moment,” George concludes.