Nearly 50 per cent more pears than apples harvested in 2018

This year’s pear harvest amounts to 402 million kilograms, the apple harvest amounts to 269 million kilograms, according to area figures for apples and pears from the CBS (Statistics Netherlands). In the past year, the apple area continued to decrease by 350 hectares, while that of pears increased by 230 hectares. This has been a trend that’s been happening for 20 years. Between 1998 and 2018, the apple area decreased by more than 8,400 hectares, while that of pears increased by nearly 4,000 hectares. A turning point came in 2012, when the pear area became larger than the apple area. 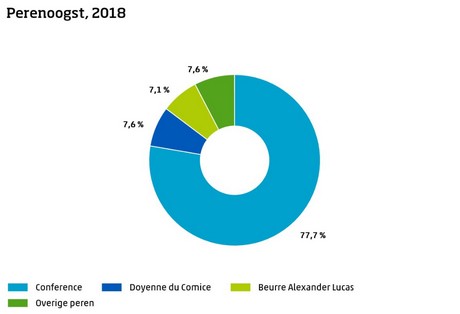 In the past 20 years, the total pear production increased from 141 million kilos in 1998 to 402 million kilos in 2018, and more than three-quarters of this is Conference. Pears have a better export position, and Conference has grown in popularity rapidly, from 3,463 hectares in 1998 to 7,512 hectares now. Second pear variety Doyenné du Comice saw its area decreasing from 1,230 to 763 hectares in these years. The Buerré Alexander Lucas variety, introduced in 2004, has grown to 673 hectares. 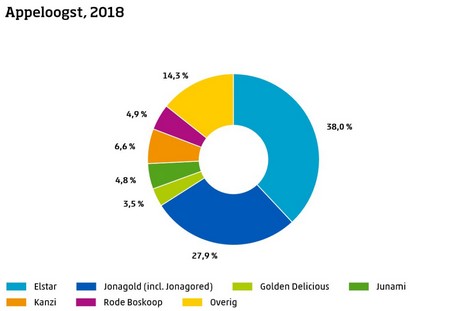 In the past 20 years, the total apple production in the Netherlands decreased from about 520 million kilograms in 1998 to almost 270 million kilograms this year. The biggest varieties within the apple production continue to be Elstar and Jonagold, which experience a lot of competition on the export market. Club varieties like Kanzi and Junami have not shown an area increase in recent years. 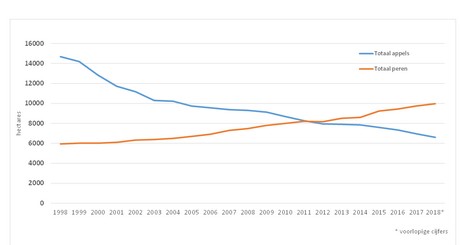