With the Thompson Seedless grapes, Greece held a winning card. Spanish growers have now also switched to the seedless grape production, and these new varieties are also being planted in Italy. Time for the Greeks to take action before they’re pushed off the market. “Greece is in danger of losing its competitive position, and unfortunately, growers didn’t have the means to be more competitive,” says Yiannis Kanakis, regional manager Greece and Turkey of IFG. His response to challenges: invest in late varieties. 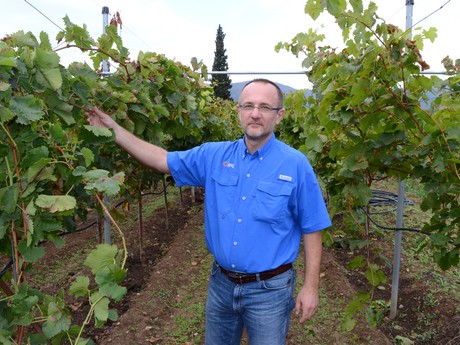 Yiannis Kanakis on a demofield near Nemea.

“Greece is in danger of losing its competitive position, and unfortunately, growers didn’t have the means to be more competitive,” he says. Italy and Spain are the biggest competitors of Greek grape growers. “Greece is known for its seedless, white grapes, we should focus on these,” he says. The Greek growers can’t compete with the large volumes arriving on the market from Murcia in the summer months. “We want to invest in the same varieties, but later in the season.” The grapes should be on the market in the months of October, November and December. That way, the Greeks can fill the gap between the European and the overseas harvest. 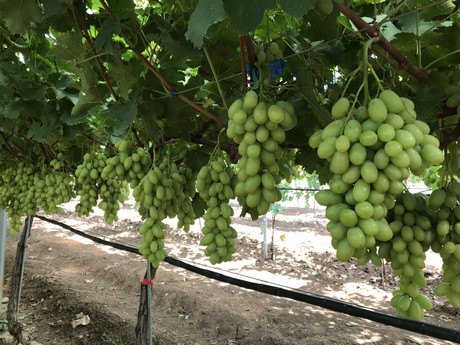 Sugar Crisp and Sweet Globe
“The hills towards the sea near Corinth are one of the most important table grape region,” Yiannis says. The other side of the mountain range is full of vineyards. More towards the north, in the Kavala, Chalkidiki, Katerini region and on Crete, grapes are grown as well. The Thompson Seedless is the most important variety. “The climate and the soils are good for the late varieties,” Yiannis continues. “It’s our goal to harvest later in the season for the export to Western Europe.” To that end, the old Thompson orchards have to be grubbed up and planted with new varieties such as Sugar Crisp and Sweet Globe.

The Greek grape sector is fractured among hundreds of growers with small areas. Some growers have less than two hectares. “The costs of replanting are relatively high, because you lose two years of production as well. Besides, you have to pay IP rights,” Yiannis mentions a bottleneck of the switch. Because of this, international table grape breeding companies ignored the Greek sector. That has changed in recent years. A couple of years ago, IFG started in Greece. “The production costs are lower, new varieties are easier to grow and more productive, and the growers harvest at the right time, when no large volumes are available,” Yiannis sums up three advantages for the growers. Besides, he also sees the benefit of the small growers with mostly Thompson Seedless production. “Thompson is a difficult variety to produce, but the Greek growers have good yields. They’re experts in the production of grapes.”

The weather plays a crucial role for grape growers, and 2018 will be recorded in history books as a dramatic season. “We had an unusually large amount of rain in the summer months,” Yiannis says. The atmospheric humidity in June, July and August was high, resulting in grapes of lower quality. “During transport or storage, quality rapidly declined in many cases. It was the worst season in years. Growers have to be prepared and plant varieties that can withstand high atmospheric humidity and a lot of rain.” Besides, covers could protect the harvest. “The late varieties need to be covered against rain. With a cover, you get nearly 100 per cent of the yield, without a cover, growers could lose up to 50 per cent of their yield due to rain.”

The new varieties can better withstand the more difficult production circumstances. This year, the summer was wet, but the Corinth region has a shortage of water. “This results in problems, groundwater could become brackish, for instance. We have to retain the water we need in the region.” 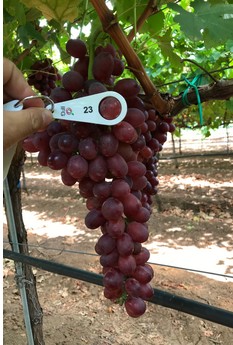 Bringing forward the season?
In the Corinth region, the first new varieties have been planted, but this hasn’t yet resulted in a commercial harvest. Growers have chosen Sweet Globe Sugar Crisp, Jack’s Salute and Sweet Celebration.

The country currently has 37 hectares of these new varieties. Next year, that area should be nearly doubled to between 60 and 70 more hectares. “The availability of the plant material is our biggest challenge,” Yiannis explains. “We’re hoping to have solved that by next year, with IFG licensed nursery mother block in Greece.” IFG has three licenseed nurseries for propagation in Europe: in Spain, Greece and Italy.

Besides the new white varieties, growers are also looking into red and black grape varieties. “There aren’t enough red grapes, although that is a bit of a trend. Growers ask also replace Crimson.” At the end of the season, the Greek growers will have a chance to do this, although Yiannis is looking beyond that. “After the first years of production with a late harvest, we also want to look into early varieties.” The company is aiming for the period before the start of the Spanish harvest in July.