Demand for Maribelle increasing from the start of the season

‘The best Maribelle, especially for you!’ a large sign on the edge of the orchard tells passing traffic. The pinkish red apple variety has been around for roughly ten years, but the variety name was unknown on the market. Some years ago, a group of growers and traders started working together to present the Maribelle under its variety name. René Wellner of Roel Wellner Fruit from Est, the Netherlands, is one of those growers. 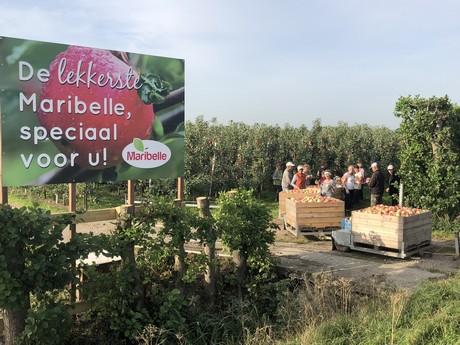 “With the Maribelle, we can be distinctive on the market,” René says. The family company is traditionally focused on the production of apples. The principal varieties are Elstar and Red Boskoop Welbo, but Maribelle has also had a permanent spot in the orchard for some years now. Of the 40 hectares owned by Roel Wellner Fruit, 12 hectares are planted with Maribelle. The remainder is split between Elstar, Jonagold, Red Boskoop and Celica Welbo.

Working with a free variety
The company’s roots are in Geldermalsen, but Roel Wellner moved to Est for an expansion. “My grandfather founded the company,” René says. “We’re traditionally focused on the export to Germany and Eastern Europe.” René’s father built up this branch of export. In the past ten years, the market has changed, and export is becoming more difficult. René, who will take over the company with his brother Jeroen, is more focused on the domestic market. 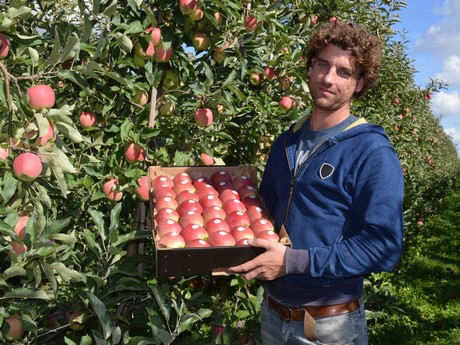 “We decided to market Maribelle with various traders and growers. In the future, we as growers should work together more often, because it provides us with opportunities,” René says. The Maribelle is a free apple variety, which means it’s even more special that the growers are working together for sales. “The Wellant is another a free apple that’s appreciated, particularly by market traders, and it performs well,” René gives a second example from the sector.

Sustainable production
“Maribelle is a firm, freshly sweet apple with a pinkish red colour and a good shelf life,” he describes the characteristics of the variety. Because of this, the variety has a lot of potential for the Dutch market. “The sweeter apple varieties are gaining more ground in the Netherlands. Elstar is naturally the Dutch apple, and that won’t change. Regarding the Jonagold-like varieties, the sector is dealing more and more with Eastern European production. That’s why we must have another variety.”

Part of the Maribelle harvest has been Planet Proof certified. The production of Maribelle is sustainable, René explains. The variety doesn’t need a lot of pesticides. Attention has also been paid to sustainability in packaging. This season, for example, the apples are placed in the barrels in paper trays. “This way we can meet requirements from retail and we can be distinctive.” 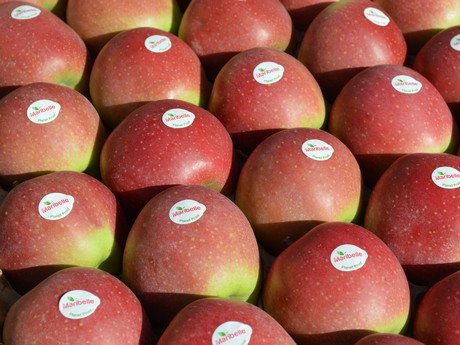 Higher prices from industry
Maribelle is positioned as an addition to Elstar. “Maribelle is a good apple to follow Elstar in the second half of the season,” René explains. The emphasis is therefore on the second half of the season. After the harvest, the fruit is stored in ULO cells until about May, when supply of Elstar starts declining. That moment, however, is starting to shift, in part because of shortages on the market last year. “Last season was a great time to present Maribelle. A lot of apple varieties had shortages, but not Maribelle. That’s why we’re now seeing a good demand.” The disappointing storability of some batches of Elstar and Jonagold can also be good for Maribelle this season. “A lot of Elstar and Jonagold apples are too ripe, but Maribelle came through the warm summer quite well.”

Year-round supply of the apple is the goal they are working towards. “That does require growers and trade. When there’s demand, we start selling, but we shouldn’t flaunt it,” the grower says. René is focused on sales to retailers, wholesalers and exporters. Besides, the variety is appreciated by industrial processors. “It’s a good apple for processing, and industry is willing to pay more for it compared to other varieties.”

To increase the familiarity of the variety, limited actions are being set up with retailers. As of this year, the orchards in the Betuwe feature large signs to promote the variety. “We’re doing small-scale promotions, but we mostly rely on word-of-mouth advertising,” René concludes.