“Our goal is to preserve Indian River grapefruit”

Last month, FreshPlaza visited with Premier Citrus in Vero Beach, FL., a fully integrated grower/packer/marketer of grapefruit and oranges who operates in 7 out of Florida’s 14 citrus producing counties. At the time of the visit, harvest had just started, but is in full swing now. “Most of our fruit is grown in the Indian River growing district, which grows the best grapefruit in the world,” says Tom Jerkins, President of Premier Citrus. Grapefruit makes up 60 percent of the company’s fresh market with about half of the volume ending up in the domestic market and the other half being exported to Europe, Japan and Korea. Orange production makes up the remaining 40 percent of the company’s shipments, which are mostly domestic US.

In addition to the fresh market, Premier Citrus also grows citrus for the juicing segment. “The critical mass of Florida’s citrus production is destined for the juice industry,” said Jerkins. “Florida juice quality is so high and so valuable that in Florida the fresh industry is not the primary use for the fruit. However, our fresh market is critical to enhance the fruit’s total value, but in reality most Florida fruit finds its way into the juice channels.” 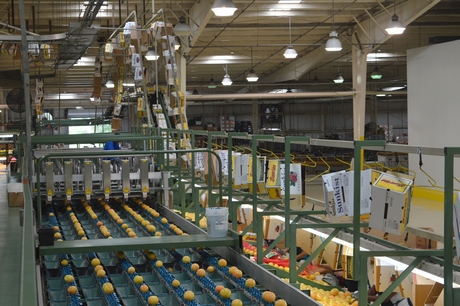 Digital sorting of grapefruit by size, weight, color and blemish. 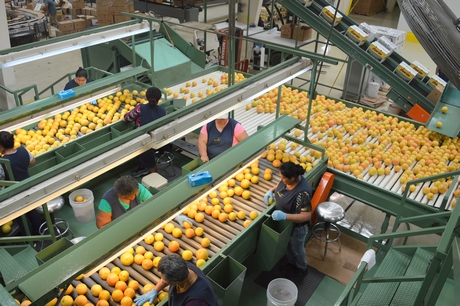 Manual sorting of the fruit. 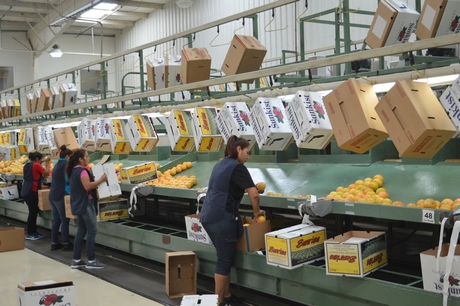 Grapefruit is packed in boxes.

Managing other farms
Premier Citrus has its own land, packing house and farm management. In addition to growing and packing its own fruit, the company also manages the groves of other institutional-sized growers. “We have a handful of big clients that we provide with turnkey service,” mentioned Jerkins. This includes planting, budgeting, harvesting, marketing and even negotiating juice contracts.

90 percent grapefruit production decrease since 2000
Since its introduction in 2006, huanglongbing (HLB), known throughout the world as ‘citrus greening disease’, has put tremendous pressure on the industry. In the years leading up to 2000, Florida produced 50 million boxes of grapefruit annually, but last year production was down to below 4 million boxes. In the past decade, grove acreage has become smaller and per grove productivity has decreased. That dramatic production decline isn’t all about greening disease, as the Florida citrus industry suffered from Hurricane Matthew two years ago and Hurricane Irma last year, each contributing to fruit loss and grove health decline. “We are pretty optimistic for this year as it is now officially hurricane-free” said Jerkins. “Orange production forecast is up from 50 million boxes last year to 80 million boxes this year. Grapefruit production is up from last year’s 4 million boxes to nearly 7 million this year. All in all, we are very pleased with the quality of the fruit as well as the volume.” 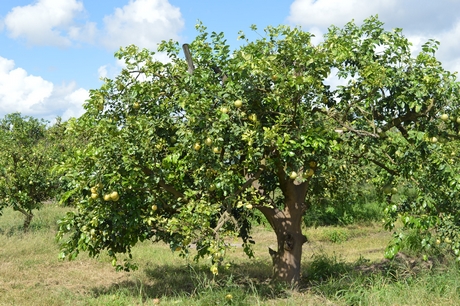 Recovery of existing trees
Jerkins has been very involved in the effort to counter HLB. “In addition to my responsibilities at Premier, I was the original and only President for the first nine years of the Citrus Research and Development Foundation.” Over the years, the CRDF - funded by Florida growers - has invested more than $200 million in research and product development to solve HLB, including potential therapies but more so with focus on developing genetically improved plants that are immune to HLB. “Here at Premier, we have focused on the recovery of existing trees, meaning focus on therapies. Most existing Florida trees now run at 65 to 75 percent of their pre-greening yield capacity and our work on our therapeutic solution is focused on increasing their productivity up to about 90 percent,” Jerkins said. Focusing on improving the health of existing trees versus planting new trees saves us valuable time, and of course considerable new planting capital,” Jerkins mentioned. “Our technology is encouraging, but it still takes time to demonstrate positive results. We expect to have real proof of concept demonstration as early as May of 2019. We have the best scientists on staff and feel very hopeful about this novel technology.”

Natural Light Labeling (NLL)
The greening disease has created an extremely challenging environment for the Florida citrus industry. “While our packing house is 20 years old, we operate the ‘newest’ citrus packing house in the state. That suggests something about the state the industry is in,” Jerkins shared. However, the company continues to be positive on Florida packing and keeps on looking ahead. “The most novel new opportunity we have - and we are very excited about it - is Natural Light Labeling; a new labeling technology for our fruit. It displaces adhesive labels with label images directly on the fruit that are applied by and at the speed of light, with almost infinite capability as to imagery and traceability codes.” The light technology has been approved for citrus sales in the US, which by FDA rule includes imported citrus from other countries. Premier expects the technology to be approved for a wide variety of other produce by end of 2019. 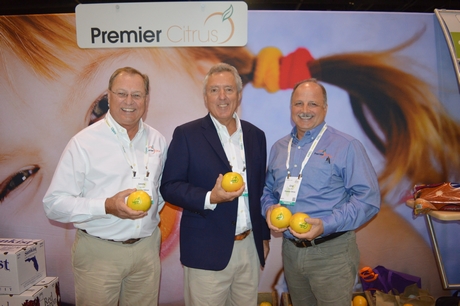 From left to right: Jimmy Johnson, Tom Jerkins and Greg Drouillard at Premier's booth at PMA 2018. 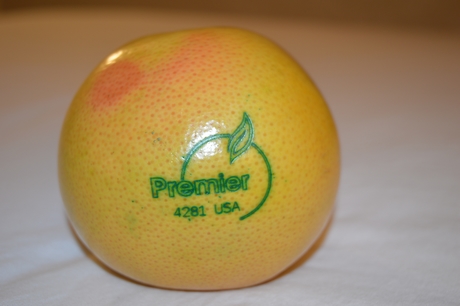 Label applied at the speed of light.