Bernd Feenstra and Raymond van Ojen look at the trees, which are heavy with pears, approvingly. Grower Herman van Ingen is also satisfied with the harvest. In week 39, the final Xenia pears are picked. Herman made a conscious decision to wait as long as possible. He’s hoping to harvest a better flavour this way. 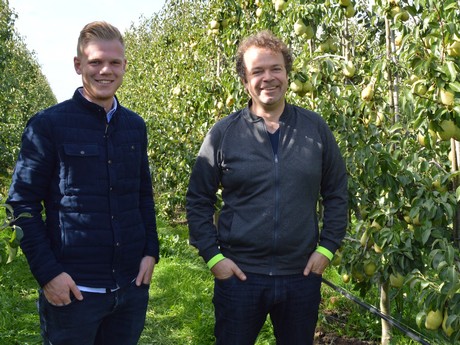 “It’s almost a shame to harvest them,” Herman sighs. But they will be picked, so that Raymond and Bernd can sell them. The Xenia pear variety was discovered in Moldova in the 1960s as a cross between Triomphe de Vienne and Krier. In 2010, Dutch supermarket chain Albert Heijn started carrying the Xenia pear in their assortment. Three years later, Xenia Europe was founded. The organisation is responsible for the sales of pears that are harvested in the Benelux and the sales of all trees in Europe.

Organic Xenia market promising and challenging
“The trees and pears are sold throughout Europe,” Bernd says. He’s responsible for management and marketing. Colleague Raymond does sales and logistics. In the Benelux, 60 growers have Xenia in their orchards. Combined, these growers are good for a harvest of about six million kilos of pears this year. “Last year, roughly two million kilos were frozen, and we had four million class 1 pears for selling available,” Raymond says. This season, a similar harvest is expected, but without frost damage, resulting in more class 1 pears. “We have a good harvest,” Raymond confirms. “After the harvest we coordinate the sales and we’re dedicated to realising a net price as high as possible for our growers.” 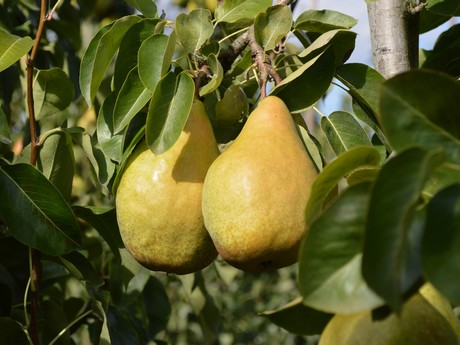 About 150 tonnes of the harvest is grown organically. Besides, an additional 300 tonnes of ‘transition fruit’ is available. The organic Xenia have a shelf life that easily lasts until April. That offers opportunities. “For the organic market, our biggest challenge is selling larger sizes, because organic consumers are more used to smaller sizes,” Raymond explains.

Pear tasting
“The pears have high sugar contents. That’s part of the reason why we once again expect a good flavour.” Raymond isn’t worried about the storability of the fruit. In recent years, a lot of experience was gained with various cooling regimes for different sales periods. Besides mechanical and ULO cooling, part of the pears, which is sold later in the season, is treated with SmartFresh. “It’s still a bit of a taboo, but with good monitoring we can decide which batch can be sold on the market first,” Raymond adds. Every three weeks, pears from the cold store are inspected and tasted per origin. “Besides quality, we’re also looking at ripening and flavour. We literally taste them, because the consumer experience has to be good.” 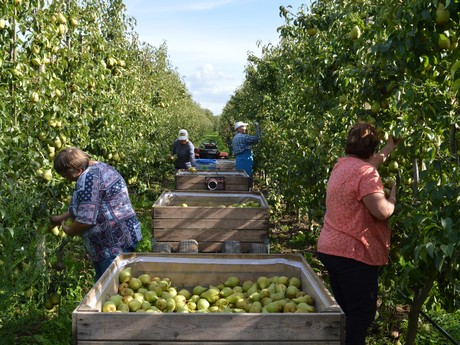 The Dutch Xenia growers can be found throughout all fruit regions in the Netherlands. After the harvest, the pears are collected by three cold stores: Fruvo BV, Fruitstation van Arkel, and Brokken BV. “Our policy is that the sorting stations and cold stores we use also grow Xenia,” Raymond continues. In the first months of the Xenia season, demand is relatively low. Usually, one of the packing stations will be enough to handle demand. As the season progresses, they scale up until finally all three packing stations are active. “That’s usually between December and May,” Bernd explains. Raymond expects a good demand. Sales started in week 40, a few weeks earlier than last year.

Increasing demand earlier in the season
Xenia Europa sells the pears under the authority of the Benelux growers. Although Raymond has a lot of freedom, the season starts by drawing up a sales plan. That plan is submitted to and approved by the board of growers, who also indicate a net price goal for sales. Besides the domestic market, the Dutch Xenia pears are also sold in other European countries. These countries also have local production, but that’s insufficient to meet demand. “Normally, the local fruit is sold first, so that room for Dutch import is created,” Raymond says. “In Germany, however, the Dutch and German pears are on the market side by side, because demand from Germany for these pears is large early in the season. The German market is big enough for that.”

This is characteristic of the development of the pear. Last year, 20 hectares of Xenia were planted in the Netherlands. This year, the area increased by another 15 hectares. “It’s mostly existing Xenia growers who expand their area. That’s a positive sign,” Raymond says. At the start of Xenia as a club variety, an area of at most 1,000 hectares, half of which in the Netherlands, was set up as the limit. “We won’t immediately stop planting, but I can imagine a restriction will be imposed earlier,” Bernd says. In the end, market demand decides the growth. The European pear market is relatively small and constantly changing. 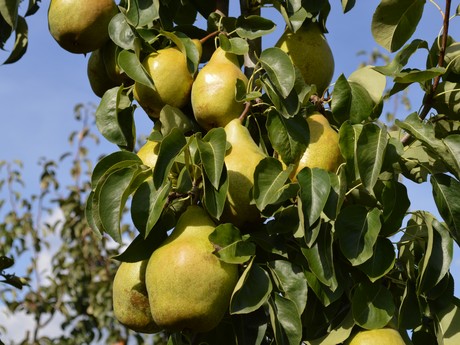 Stable prices
“We maintain equal prices for all customers,” Raymond says about sales. Of course there’s room for negotiations, although these mostly concern sizing and promotions. “Supermarkets and wholesalers are willing to pay a bit more for quality, but you do have to maintain the same prices for the same quality.” Compared to last year, Xenia Europe kept their prices stable at the start of the season this year. “Last year, we had relatively competitive prices on the top fruit market due to market developments. This year, prices remained roughly the same. Looking back at the past three years, purchasing prices for our customers have been stable and predictable.”

Within the pear segment, more club varieties are created, which also results in more competition for Xenia. “We’ve been set up by the growers. We don’t use subsidies, and we don’t have large budgets for marketing campaigns, but we do have a good and flavourful product,” Bernd says. “A good pear sells itself.” Good flavour, reliability and predictability are the most important ingredients for that. “The Xenia pears has a good shelf life and is distinctive regarding flavour and bite,” Raymond says. The fact that the pear doesn’t drip is another benefit.

While the pickers in the orchard continue filling the crates of the little train, Herman goes back to the company. Two full trains are still waiting in the grounds. These have to be unloaded before the product can end up in cold store. “They still look best on the trees,” he concludes.