Vergro celebrates its 50th anniversary this year. The company once started by exporting Belgian fruit and vegetables to France, and they now supply the complete fresh produce range to various European countries. A month ago, they took over D&G Fruit, further consolidating their position in the top fruit sector.

In December 1968, Vergro was founded. The company from Meulebeke, Belgium, was initially mostly active exporting fruit and vegetables to France. “We’re still specialised in Belgian products, including tomatoes, leek, lettuce, strawberries, apples and pears, but over the years, we became a total supplier,” says owner Dominiek Noppe. The products find their way to commercial establishments, wholesalers and retailers in more than 25 different countries in Europe. Germany, France and the UK in particular represent an important share of the total turnover. “Besides, we’re also supplying more and more countries in Eastern and Southern Europe.” 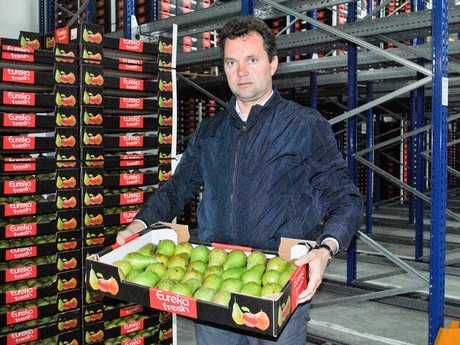 For ten years, Vergro has also had a branch in Sint-Truiden. The top fruit is traded from here. “We made a conscious decision to open a branch here, because this is the fruit region of Belgium,” Dominiek says. “A large part of our apples and pears comes directly from the growers, who sort and pack them in the right packaging. This is cheaper and to the benefit of the fruit. For that matter, all products are inspected and approved again upon arrival. Besides quality, this also results in the option of further specifying a batch, to make it easier to decide whether it should go to a certain customer or not. Vergro tries to work as customer-driven as possible. We expect buying specifically for certain customers will only become more important in future.”

Growing based on customer demand
With the takeover of D&G Fruit, Dominiek hopes to meet this requirement even more. As of August this year, the activities of the top fruit company have completely become part of Vergro. The name D&G Fruit will continue to exist as a production company, but D&G Fruit Business will disappear. “A major advantage of this takeover is that we now have 150 hectares of own production and our own packing stations, so that we can guide our customer-specific supply even better. We want to grow our apples and pears on customer demand. So not just Jonagold because it’s easy, but also Gala, Braeburn, Granny Smith and Evelina, which we think are in demand. We will expand on this even more in future. Another reason not to pass up on D&G Fruit is the fact that the company has been directly supplying retail in the UK for ten years now. We know from experience that it isn’t easy to gain a foothold here.” He’s therefore not worried about Brexit. He expects it’ll continue to be a good market for products not grown in the UK. “The products will probably become more expensive. We can only hope for the best.” 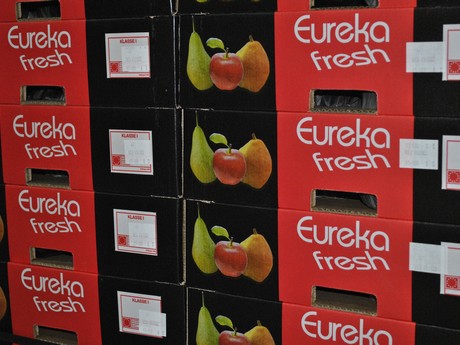 Only the best fruit is marketed under Vergro’s own label Eureka Fresh.

This season, the new red pear Red Modoc will also be presented to the general audience for the first time. Vergro holds the licence of the first blood-red pear, named after a Native American tribe. The pear is a cross between Red Barlet and Forelle, and is completely red. This season, about 70 tonnes of Red Modoc will be available. Dominiek: “There’s room for a new pear, and our Red Modoc is truly distinctive. This pear is also interesting for the growers. Red Modoc offers plenty of kilograms and has a good shelf life. An additional advantage is that the production of this pear results in fairly homogenous sizes. We now have 12 hectares of Red Modoc, and we’re planning on increasing the area to about 100 hectares over the next few years.Next season, we’ll add 25 hectares.”

Represented in the most important fresh produce regions
The company has now been around for half a century, and although growth has never been the intention, according to Dominiek, the company isn’t afraid of another expansion either. “If it’s an addition and complementary,” Dominiek explains. “Last year, for example, we took over DVL in Sint-Katelijne-Waver, resulting in a major expansion of our assortment. This takeover was also interesting because it was a direct connection to Southern France in summer. We then came across D&G, which resulted in our own production, packing stations, a new pear and direct access to British retail.” Vergro is represented in the three largest fruit and vegetable regions of Belgium. Because of that, Vergro can be flexible towards customers, and unnecessary transport costs are avoided. “Transport is becoming more and more expensive, and the crowds on the roads are only costing us money and time. We want to prevent unnecessary miles as much as possible.”

The increase of the company requires another expansion. Vergro bought land in Sint-Katelijne-Waver to build a new warehouse of 8,000 square metres. Construction is also taking place in Sint-Truiden. In addition to the existing hall, a new, completely conditioned warehouse of 3,000 square metres was taken into use in September. “We now have more room to prepare the orders, so that the lorries no longer have to wait, and we can better respond to last minute orders. The takeover of D&G Fruit resulted in an additional 5,000 square metres and six loading docks. Besides our own packing station and two external packing stations, we acquired three more packing stations to process customer orders quicker and more flexibly. The new office in Sint-Truiden is still under construction. The office workers of the nearby D&G Fruit will also work in the new building.”

When we visit Vergro at the beginning of October, the final apples of the season are being harvested. Dominiek mentions that the market is currently difficult. “There’s not much demand yet. I think it’s therefore not useful to put large volumes of fruit that aren’t in demand up for auction. We expect prices to remain low until the end of the year. A lot of import fruit is still available, but large productions elsewhere in Europe are also putting pressure on the market, particularly in apples.”