A visit to Innatis and Blue Whale

Photo Report: French apple exporters see an opportunity in the US

French exporters Blue Whale and Innatis are big players on the national, as well as the international apple market. Despite strict phytosanitary demands, both companies have been aiming for the US for some years now. Jacques Malagié (Vergers d’Anjou/Blue Whale): “The US are an interesting market for premium products. They can be sold for a good price.”

The American model
“The US have inspired us from the beginning,” says Arnaud de Puineuf. He works for Pomanjou, one of the commercial subsidiaries of Innatis. “After WWII, The US were thirty years ahead of France. Growers over there had already quite developed monocultures and mechanization. French growers were merely small farmers compared to them, with many different crops. Companies such as Innatis and Blue Whale were founded on the basis of the American model.”

Opportunities for Honeycrunch
Pomanjou exports to the US since 2014. The company has the European exclusivity rights to Honeycrunch, the same variety as the Honeycrisp, populair in the US. Arnaud: “The French and American season don’t run parallel. If the American Honeycrisp runs out, we can supply the remaining demand with our Honeycrunch.”

According to Marc Rauffet (president of the Innatis Group) Innatis can deliver better quality in January with French Honeycrunch than the Americans. “We know how to optimally store the apples by solely relying on refrigeration, rather than the use of chemicals. This guarantees the preservation of taste.” 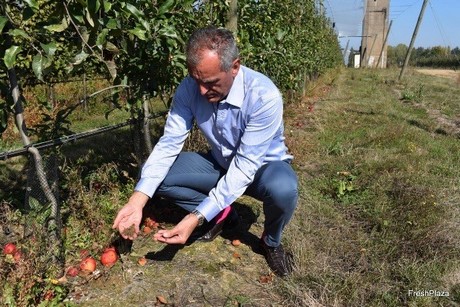 Marc refers to the rich and fertile soil on which the apples are grown. Apples that have fallen by themselves are used as soil nutrition.

Greenpeace
Marc Rauffet: “At Innatis we work with a passion for nature. Just like 70% of the French apple producers, we too are certified as ‘Vergers Ecoresponsables’. This label guarantees nature-friendly production methods. We are consciously preoccupied with the wellbeing of the next generation. Greenpeace was here just about two weeks ago, since they appreciate our production methods.” 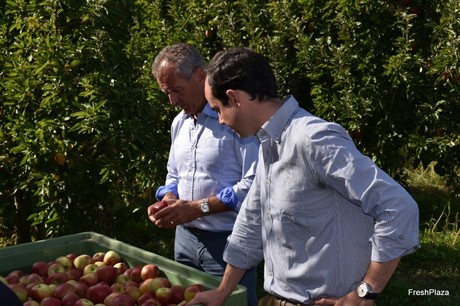 Transformation
Innatis invests in the processing of apples as well. Gilles Tessier of Les Vergers de la Silve develops products such as apple juice, caramel, and non-alcoholic sparkling beverages with the Honeycrunch of Pomanjou. He supplies Michelin restaurants, as well as the Élysée: the presidential residence of France. 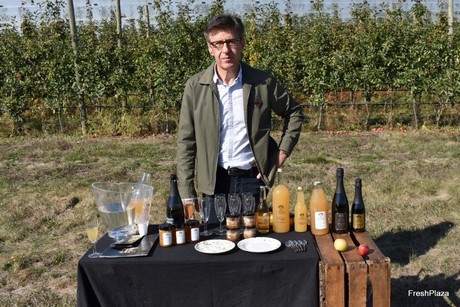 French aim for global presence
The export company Blue Whale is active in 70 countries and commercializes the products of Les Vergers d’Anjou, a big cooperation of apple and pear growers. Jacques Malagié, director: “We try to be present on all markets to be able to sell all sizes and colors. This way we minimize our risks immediately, because somethings might always change in the geopolitical situation. Think of the Russian embargo or the frost in China.” 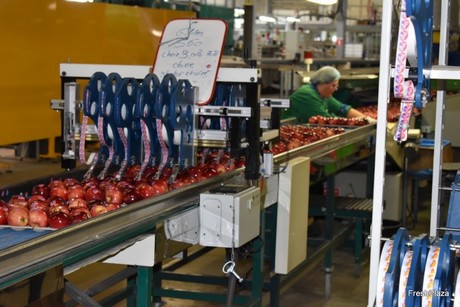 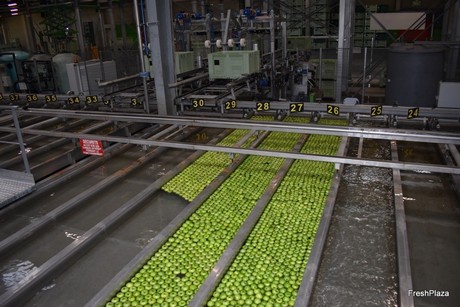 Pink Lady
One third of the apples of Les Vergers d’Anjou are Pink Ladies. The orchard of Albert Richard, the company’s president, is full of them as well. He produces 2,000 tons of apples on 30 hectares. Albert took over the company from his parents, and considers growing fruit a true passion. Most of his trees have been around since 2006, and now are therefore about twelve years old.

Albert with one of his Pink Lady trees. Harvest will commence this month.

Albert’s Pink Ladies are of the Rosy Glow variety

Pears going to the US
Next to apples, Blue Whale exports small amounts of Angelys pears to the US as well. “This is a beautiful export product. The pear is tasteful and has a long shelf life. Production will dramatically increase in four years, which is why we shall further develop global sales,” according to Jacques.

Arnaud explains: “Club varieties bare fewer risks, due to the amounts brought to the market being controlled.” Jacques adds: “Some classical varieties, such as Granny, Golden, and Braeburn, are running somewhat out of fashion. There’s a demand for exclusive varieties, together with good marketing.” 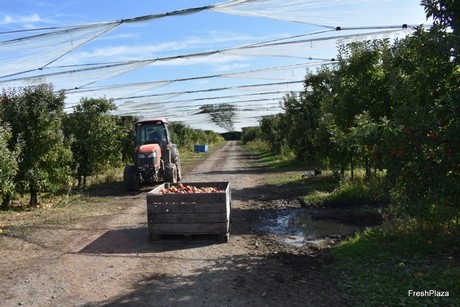 Facts and figures
After Poland and Italy, France is the third apple grower of Europe with 1.5 million tons. The biggest production areas are the Loire valley, and the south of the country. The season runs from October to March, but French apples are available year round.

Apples are the most popular fruit in the US, after bananas. The Gala is the most consumed apple. 18,7% of apples grown in France are of this variety.