A highly nutritious orange sweet potato flour, rich in Vitamin A, has hit the Ugandan supermarket shelves. Carol Komujuni, a local entrepreneur at the Kira-based Namugongo Millers Ltd is the brain behind the multipurpose flour.

She came up with at least three by-products: OSP flour; which is multipurpose pure orange sweet potato flour that can used for making porridge and baking, as well as the mixed products (OSP Millet and OSP Soya Rice) for making porridge. 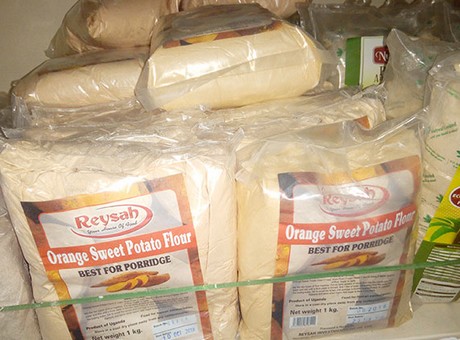 A pack of 1kg OSP flour and the mixed OSP products costs Shs 6,000 (€1.35). Last week, Komujuni rolled out a promotional campaign for the products at Ntinda-based Capital Shoppers and Tuskys supermarkets.

“The customer response has been overwhelming and very positive,” Komujuni told The Observer.

She supplies an average of 3,000 kilograms every month. She also gets special orders from higher institutions of learning such as Makerere University.

Having started out as a pilot scheme, Komujuni relied on her small garden to provide the potatoes as raw material and it was enough for the first six months. However, with increased demand for the products, she has had to tap into HarvestPlus’ countrywide network of farmers, who grow the potatoes.