Representing 75 to 80 percent of fresh apple production in the United States, the growing conditions in Washington state are a critical factor in total US apple production for the country. “This year, it was a harder growing season in Washington,” says Don Roper with Honeybear Brands, a vertically integrated, multi-region apple grower and packer.

“A cool spring resulted in a spotty bloom and, as the industry, we’re seeing a lot of holes in the Washington crop, meaning some trees have a really strong crop load and other trees are quite bare,” he explained. The Honeycrisp and Gala varieties have been hit hardest and the state’s fresh apple production is expected to be down from 120 million bushels last year to a projected 105, to maybe 110 million this year.

The Midwest and Northeast make up the remainder of US apple production. Each region has a share of about 10-15 percent in total US production. Last year was a tough year for the Midwest, only harvesting about 60 percent of a normal crop due to frost. This year however, both Michigan in the Midwest and New York in the Northeast are expecting a full crop. All in all, total US fresh apple production is expected to be similar to last year.

More reliance on Southern Hemisphere
A colder spring is causing apple harvest to start late. The earliest varieties have just started shipping, which is about two weeks later than normal. “This delay is causing quite a gap for retailers,” commented Roper. “The pipeline of key varieties like Gala and Fuji is essentially empty and retailers are anxiously waiting for the new crop to arrive in stores.”

With many regions being out of fruit before new harvest arrives, Roper expects retailers to look even harder at supply assurance solution from the southern hemisphere next year. “Apples are a globally produced crop, retailers and processors require year-round supply assurance and planning out of the Southern Hemisphere must be done well in advance. We expect further reliance on dual hemisphere supply solutions in the spring and summer of 2023 as the overall domestic crop for this year has not materially changed from last year.” 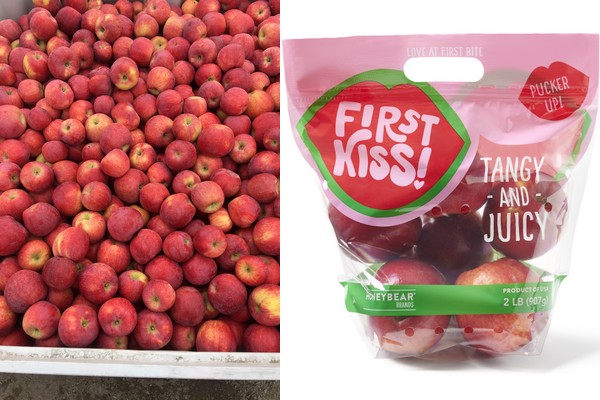 Pazazz variety on the left and First Kiss on the right.

Up and coming varieties: Cosmic Crisp, Pazazz, First Kiss, and Honeymoon
Within the apple category, the Cosmic Crisp variety is expected to be up significantly in volume this year due to all of the young plantings coming into production. It has been commercially available since 2020. “In general, lots of managed varieties are on a growth curve as new trees are bearing more and more fruit,” said Roper. In addition to Cosmic Crisp, some of these varieties include Pazazz, SnapDragon, Evercrisp, and SugarBee. Pazazz is one of Honeybear Brands’ premium flavor varieties, grown in Washington, Minnesota, Wisconsin, New York, Nova Scotia, and Chile. In its fifth year of commercial production, Pazazz continues to gain market share.

Still in the introduction stage, but gaining a lot of traction is First Kiss, a variety that is a cross between Honeycrisp and AA44 from the University of Arkansas. First Kiss is first to market as it is ready to be harvested late August while Honeycrisp usually isn’t ready to be picked until middle of September or later. Still in the pipeline but expected to commercialize next year is HoneymoonTM. “It is a yellow variety that has a tropical flavor with a nutty finish. It’s an exceptionally clean piece of fruit that is being trialed in Washington that we have very high expectations for,” said Roper.

While Honeycrisp used to be part of the new varietals, it has now moved into the category of mainline varieties. “Honeycrisp still dominates the apple category. It is the largest variety for us, but also generates 50 percent of sales for many retailers in North America. Honeybear Brands started growing Honeycrisp in the Midwest over 25 years ago and then took the variety to Washington and led the commercialization of the variety. “We commercialized Honeycrisp in the US, followed by gaining exclusive rights to grow the variety in Chile and Argentina. “Not only have we become the largest Honeycrisp grower in the southern hemisphere, we’re one of the largest conventional and organic Honeycrisp growers in the world.” 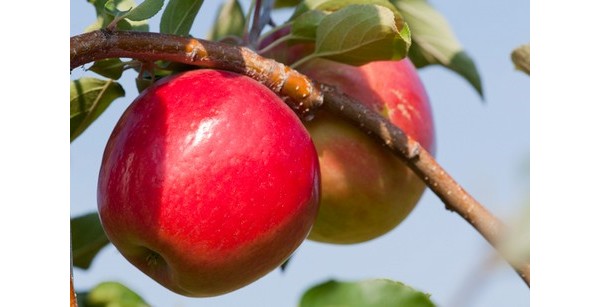 Strong demand but combating inflation pressure
A supply gap is causing demand to be strong out of the gate this year a result of an empty pipeline for several varieties. As a result, pricing is elevated. “This is not only caused by strong demand, but also due to the fact that the costs of labor, packaging, fuel and logistics are through the roof,” mentioned Roper. He expects demand to stay strong despite the higher price point. “Apples are a hardware produce item; they almost always make it into the shopping basket.”

In this high inflation environment, there is the potential that consumers may trade down from higher priced varieties to lower priced varieties as they are more mindful of their dollars being spent, but they still continue to buy apples. “As an industry, we have to be cognizant of the available dollars for produce purchases. Apples continue to be one of, if not the most, value item in the produce department.”