Damage to early fruit in Chile is estimated to be about 10%, with the full extent currently being assessed, after a freak hailstorm, which touched some cherry, table grape and blueberry farms over the past weekend of Saturday 12 and Sunday 13 November. Rain, let alone hail, is most unusual during Chile’s early season experts say. 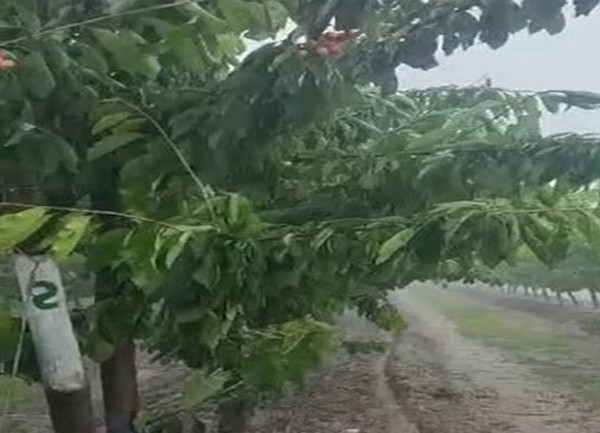 According to Lorena Pinto, a Product Manager of Cherry & Pipfruit New Varieties at the company Ana Chile: “In the central area of Chile, that is between the Metropolitan and Maule Region, they say that one out of five fruit growers had some level of damage. Fedefruta’s estimation up to now is that the damage won’t be more than 10% of early harvest fruit. But they will update this information in the course of the season.

"It is too early to have exact details of the extent of the damage, but the growing areas affected are bounded, because the hail produced the higher damage but it is in some scattered spots. In other areas of the same region the growers had only rain or even no event at all. The main economic damages will affect the cherry, table grapes and blueberry production. Inevitably the growers will increase their production costs, because they need to avoid quality problems that can occur after rain in this period. In Chile it is not common to have rain in this period, and the hail events are almost non-existent!”

View a short clip of the hailstorm

Pinto said Fedefruta, the union that represents many producers in Chile, are asking them about the damage level on farms to gain a true understanding of the full impact of the hailstorm and rains.

According to a report provided by FDF (Fundación para el Desarrollo Frutícola), the Ñuble Region was the area that reached the higher precipitation level. For example San Nicolás registered 35,1 mm of falling water and secondly the Bío Bío region registered precipitations between 26mm, in Los Ángeles, to 28,6 mm in Antuco. In the VI Region (O’Higgins) they had around 11 mm rain in general, but the area with higher incidence of precipitation was Codegua with 16,1 mm, while Tal fue el caso de Codegua received 16,1 mm.

The FDF Report shows that in the VII Region (Maule Region) the maximum level of precipitation was achieved by Parral with 19,6 mm and Longavi with 14,2 mm. Both areas are located from Talca to the south. Other Locations from this Region, such as San Javier, Yerbas Buenas and Linares, reached between 10,8 and 11,6 mm of rain.

The FDF Report continues that in the Valparaíso and Metropolitan Region, the precipitations were not more than 4mm; with the higher incidence in Los Andes (3,2 mm) and the metropolitan Region in the areas of Pirque (3,8 mm), Buin (3,2 mm) and Paine (3,1 mm). There is no indication yet if the packing of cherries, table grapes or blueberries were significantly slowed down following the hailstorm.