Euroandes, a trading company with a wide range of fruits and vegetables to supply the European market

The blueberry export figures released by the FAO statistical portal reveal this fruit's huge boom in recent decades. At the beginning of the century, the berry's global exports were worth just over 69 million dollars; in 2010, this value had grown to over 370 million dollars, and in 2020, the last year for which consolidated data is available, it had soared to almost 2,403 million dollars. This evolution has only been possible thanks to a rapid and surprising increase in the global demand which, as in Europe, still has room for further growth.

"At Euroandes we seek to complement the sales channels in Europe of our strategic allies in Peru and Colombia, among which there are companies such as Danper, Arbacol and Dominus," says Christian Pereda. "The consumption of blueberries is increasing, and the exportable supply has also grown significantly, so we, at Euroandes, have been working to strategically expand in those markets where our allies haven't done it, yet."

"On the operations side, we are highly flexible. We are based in both Spain and the Netherlands, and we operate through Europe's main ports, offering solutions adapted to our customers."

Euroandes plans to market around 2,000 tons of blueberries this season. "We have started the campaign with good prices and we believe that the situation could remain interesting for another week or two. After this there will be greater pressure from the supply on the market, with considerable volumes arriving in Europe from Peru."

"We have started the blueberry season in August and we will have supply until January, but at Euroandes we will aim to extend this period by resorting to the supply from other origins, either from Africa or South America. This will allow us to supply fruit to our customers all year round."

"Hand in hand with our allies in Colombia, we seek to complement the supply of avocados of sizes that tend to be scarce in the European market"
Euroandes is an importer, distributor and trading company with a portfolio that, in addition to blueberries, includes products such as mangoes or premium quality canned vegetables. At the moment, according to Christian Pereda, they are looking into introducing other exotic products, such as uchuva, gulupa and Tahiti limes from Colombia. Avocados are another of their main products. These are available all year round. 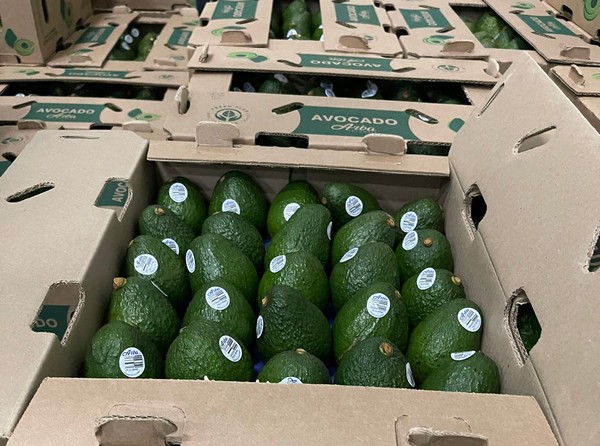 The avocado harvest in Colombia is divided by geographical zones. This makes it possible to have an extensive marketing window and fruits with different characteristics, including the sizes, which this year is set to be a very relevant factor in the European market.

"Arbacol's advantage is that it has fields in different areas. In Colombia, the earliest harvest starts at altitudes of 1,600 meters, and ends in December/January in the highest areas, 2,000 meters above the sea level. As the crop's altitude increases, so does the caliber of the fruit produced," says Christian. "Given that Spain is expected to deliver a lot of small and medium calibers, what we are seeking to obtain in the farms of our allies is precisely the calibers which will be scarcer in the market."

"Our strategic ally Arbacol has a significant exportable supply and is ready to supply all year round. This supply is complemented by that of our allies in Peru, who supply avocados from mid-February (with the earliest harvest in the highlands) to the end of August."