Almost four years ago, Limalexia was introduced to the market as the first 'market-ready' grafting variety from Limgroup. Since then, the strawberry has been growing and thriving on numerous fruit farms in Germany and Northern Europe. The Böckmann family, in the heart of the Osnabrück region, has also been dedicated to the production of Limalexia for three years now. Due to the strong results in the first two harvest years, the variety will be cultivated on approximately five hectares this year, owner Hanne Böckmann informs us.

In 2020, 10,000 Limalexia plants were initially produced in trial cultivation in the open. Böckmann: "In the first year, we were particularly impressed by the growth behavior and the homogeneity in the tray. Based on this, we then expanded our cultivation capacity to 20,000 plants in the second year, so that we could also reasonably compare the net yield with other varieties. We were quite satisfied with a total yield of 20-22 tons. The same was true for fruit size: unlike certain conventional varieties, Limalexia has little tendency to have smaller fruit." 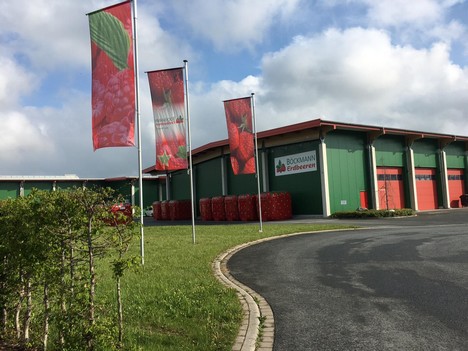 Direct marketing and wholesale
As a medium-sized strawberry farm, the Böckmann family distributes its yields both through a regular wholesale partner and through a total of 34 strawberry stands in the region. "Because of this, we are always in a balancing act when it comes to variety selection, as we need a variety with which we can serve both sectors accordingly. We have undoubtedly managed this well with Limalexia. In terms of direct marketing, I would say that Limalexia invites repeat purchases. In this respect, Limalexia has established itself as a high-performance variety with a right to exist," says Böckman. 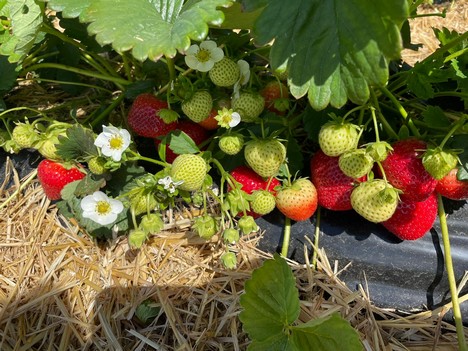 The last Limalexia fruit of this season was picked in week 30.

Similar to many other fruit growers, Ms. Böckmann faces today's challenges, such as cost increases and inflation. "That makes tonnage per hectare all the more important, which was a great fit for Limalexia this year." The same applies to the supply situation, according to Böckmann. "Apart from May, when German outdoor strawberries, imported goods and domestic goods from unheated greenhouses hit the market at the same time, the first half of the season was quite moderate. At the moment, on the other hand, the market is rather undersupplied, as many remontant varieties are not in harvest, which is why we can get good prices for our Limalexia fruit."

Climate change puts pressure on cultivation
From a longer-term perspective, 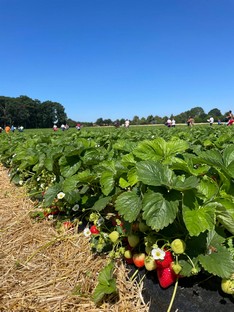 climate change and its effects pose a clear challenge, she said. "Unlike other growing regions, we have a relatively mild climate, although we also have to deal with weather extremes in some cases, whether drought or rain events. In that respect, variety selection is also extremely important. In addition, we also dedicate ourselves to protected cultivation, in tunnels and, more recently, on tiers."

Right: During the season, the strawberries are being harvested in the morning between 4:00-5:00 a.m.. They are then marketed fresh at the respective strawberry stand from 9:00 a.m. onwards. On site, the goods are repacked from 4x1kg trays into the desired packaging containers and sorted. For the trade, mainly 400 or 500g trays are used.