"Fourth harvest that's not gone to Russia, that is a structural problem"

The Russian boycott was on the agenda at a recent meeting of the European Parliament (EP). Members of the Parliament asked Phil Hogan, the Agricultural Commissioner, about the proposed EU support measures. Emotions sometimes ran high, but for the moment, there seems to be no change in the European policy.
Czesław Adam Siekierski, from Poland, addressed the meeting on behalf of the EP Land Commission, and said: "The Russian ban has led to us losing our most important market. The lengthening of the boycott to 2018 has enormous consequences for this economic sector, with big losses for agricultural businesses in the EU. These are companies with no link to the conflict in the Ukraine. "In the meantime the market remains unstable. He urged the Commission to keep in mind that it was not easy to find new markets for the agricultural and horticultural products. "It is imperative that we find common solutions for the trade barriers for as long as the boycott remains in effect."
European Commissioner Hogan referred to the support measures that are in place, in his response. He pointed out to the Parliament that EUR 419 million had already be spent on support in the sector, and that 1,7 million tonnes of fruit had been removed from the market. "The rules still apply", said Hogan. He also pointed out the efforts being made to find new markets, referring specifically to China, Vietnam, the USA and Canada. "It is a pity that the USA did not keep its promise to open its market for top fruit from Belgium and Poland. This is taking longer than anticipated." 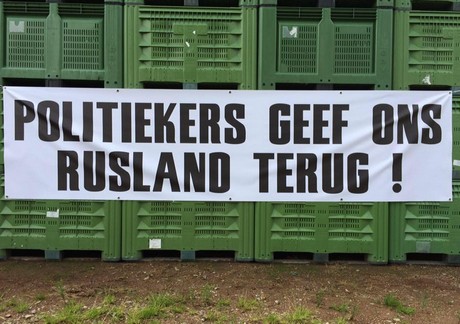 The Belgian fruit growers protesting with banners, calling on politicians to open up the Russian market again.
Dutch tomato prices
He also pointed out that export figure from the EU were higher than in the years prior to the ban. "This is, of course, not a comfort to farmers who have experienced significant losses. We have, as of 1 July 2017, extended the temporary extraordinary measures with a year. For certain varieties of fruit, we have also provided extra support." Here, Hogan was referring to the large volumes of peaches being withdrawn from the market by France, Italy and Greece.
During the debate, the MP's primarily made their argument around sales figures due to the boycott in the various sectors, Bas Belder: "Prices for Dutch tomatoes are still bad, especially in the summer when there was a large volume being exported to Russia." His colleagues from southern Europe pointed out the effects on peach cultivation.
Bankruptcy, poverty and suicide
Between August and June, 52 500 peaches were allowed to be removed from the market in Spain, Italy and Portugal. What is to be done with the remaining 70 million peaches that would have gone to Russia? "Every year, the Commission extends the temporary support measures. It is, however, always a waiting game to see whether the quota and quantities qualify for this. This causes uncertainty among the farmers." Various farmers voiced this complaint.
"This was always meant to be a temporary situation", said Hilde Vautmans. "It is, however, the fourth harvest that is not being exported. The fourth year - this is not temporary, this is structural. It is time to change tactics." She points out that structural solutions must be found. "Farmers are in crisis, with traumatic consequences." During working visits, she saw businesses on the verge of bankruptcy, farmers living in poverty, and circumstances even leading to suicide. "Sixty percent of Conference pears are sent directly to Russia. We cannot make up for this in a few small markets."
New markets, get Russia back
Bas Belder urged for greater efforts to reopen the Russian market. Other MP's want more effort going into finding new markets. The majority of them are requesting more money. One of the MP's went a step further: "Europe must end its sanctions against Russia. There is no reason for them."
The gist of the MP's protests was the same: the fruit sector in Europe is experiencing serious consequences, and major economic losses, as a result of the Russian boycott. In addition, attention was also drawn to Russia's effort to become self-sufficient, and its practice of importing fresh produce from developing countries. "The Kremlin is in no hurry to lift the ban", said one of the Members of Parliament. This is why there is an strong call to find structural solutions for fruit cultivation in Europa.
Hogan reacted by saying: "I see no political reason for a shift in the EU policy. We need to be realistic. I do not see anything changing in the short term." In his answer to Parliament, he again pointed out the extended temporary measure. He also said that EUR 1,5 billion has been placed in an emergency fund, as a supplement to the other measures. "It is not easy to find other markets, but I don't want you to be under the impression that nothing is being done about this." The European Commission has visited several countries in the past few years in order to promote European products, and acquire market access. "There are no easy solutions."