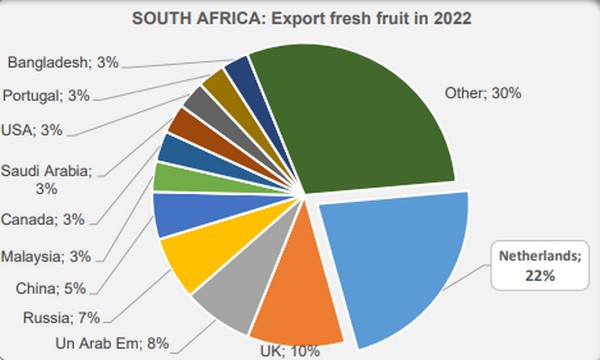 South Africa's fruit exports to all European Union countries stayed the same at almost 1.3 million tons, though (direct) shipments to especially Italy and Spain decreased significantly. After the E.U., Southeast Asia is the second largest buyer of South African fruit. This year, exports to that region should grow by seven percent to more than 800,000 tons. With 543,000 tons, that could increase by three percent in the Gulf States.

After years of growth, South African fruit exports to Russia stagnated at 280,000+ tons in 2022. This year's exports to the United Kingdom will also remain the same as in 2021: 440,000 tons. On the other hand, exports to Canada and the United States are rising quite a bit, but overall, at 260,000 tons, it is fairly modest.

This analysis data is based on Figures from the South Africa Revenue Service (SARS). The 2022 estimation uses export figures up to the end of October. Usually, 95% of the annual total is realized between January and October.

€3.7 million
South African fruit export values should reach around R61 billion this year. Assuming an exchange rate of €0.06 per Rand - in 2021 and 2022, that was roughly between €0.055 and €0.06 -  that amounts to about €3.7 billion. In 2020, that exchange rate was lower; before that, it was higher. This year, the average export price of South African fruit, in Rands, has been five percent higher than last year. But, it was slightly lower than in 2020, when the rand-euro exchange rate was lower. 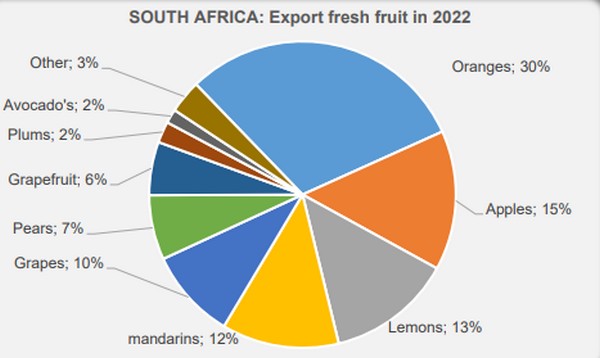 Most via Cape Town
The Western Cape is good for almost 80% of all South African fruit exports. To the Netherlands, it's even more than that. Of all 2022's exports of 4.2 million tons, 2.9 million tons were shipped from Cape Town. Durban and Port Elizabeth are the other larger export cities, both shipping just under 500,000 million tons this year.

Oranges most important product, but also somewhat down
Oranges are, by far, the most important product and have shown no real growth or contraction in recent years. This year, around 1.28 million tons will be exported. That is slightly less than last year and somewhat more than in 2020. Several growth products follow, headed by apples, with 620,000 tons of exports in 2022.

Then there is a large gap to the next product: plums, of which, even though only 95,000 tons were exported in 2022, that is 15% more than in 2021 and a record. Then comes avocado. At 62,000 tons, exports were higher than in recent years, but they have been even higher in the past. In 2022, growth products among the somewhat minor fruit are peaches and blueberries, with exports of 31,000 and 27,000 tons, respectively. 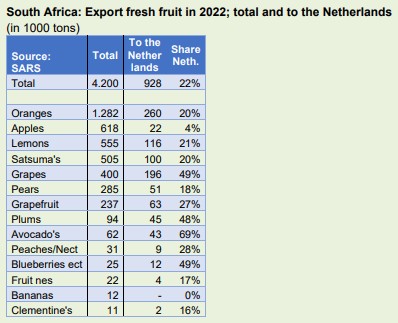 Each buyer has its assortment
South African fruit buyers all take very different assortments. For example, Satsuma - 84,000 tons in 2022 - is the main product for export to the U.K. Not far behind are grapes, apples, and only then oranges. For exports to the Gulf States, oranges are again the most important product, followed by lemons. In exports to Russia, oranges again take the lead, followed by pears, Satsumas, and lemons. Apple exports to Russia fell sharply.

Lots of mandarins, grapes, apples to the U.K.
Given the above, each product has quite varied customers. South African oranges go mainly to the Netherlands, the United Arab Emirates, China, and Russia. Most apples go to the United Kingdom, African countries, and Southeast Asia but not to China.

Minimal airfreight
South Africa ships most of its exports by sea. In 2022, that was 3.92 million of the total 4.2 million tons. By road, it sent 250,000 tons of fresh fruit, mainly to neighboring countries. And a tiny portion by air. In 2022, that amounted to 31,000 tons. Though that involves many of the products, it is mainly blueberries. This year, 5,200 tons. Grapes, apples, strawberries, and granadillas follow. The United Kingdom flies in the most South African fruit - nearly 7,500 tons in 2022. Kenya, the U.A.E, the Netherlands, Uganda, and Germany are next.