"Our regional chicory has become well established in NRW, certainly as a summer item"

Founded in 2018, Chicorée Produktion NRW & Co. is considered one of the most modern chicory production plants in Germany. The Wesel-based company, headed by long-time chicory expert Walter Buchmann, was created as a joint project of the existing specialist company in cooperation with the Dutch LOF Group and the Gemüsering. Thanks to well thought-out investments, targeted marketing and - last but not least - high-quality sprouts, regional chicory has quickly established itself in the state of North Rhine-Westphalia. 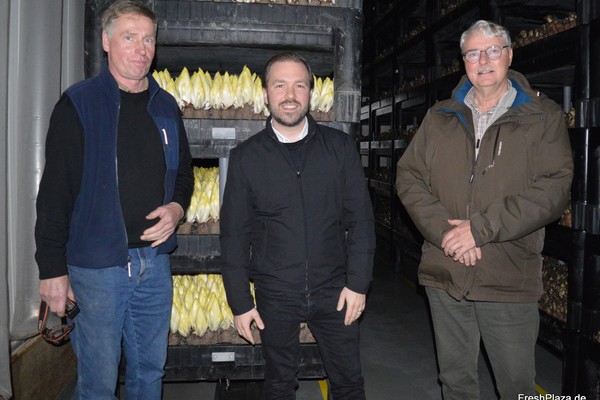 Chicory production is also facing the current cost increases, Buchmann said. "It started at the beginning of the year with the gas and electricity prices, followed by increased packaging and logistics costs. Then, in October, came the extra minimum wage increase." As a member of the Gemüsering Group, he said, the company is benefiting from collective contracts and slight price advantages, but these can only be precisely quantified at the turn of the year. 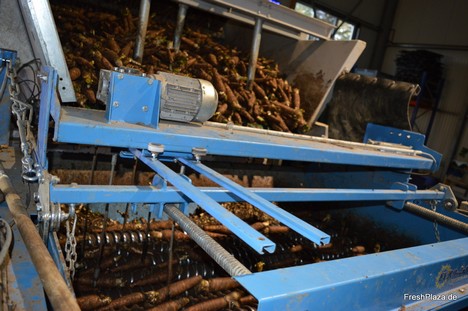 Fresh chicory roots are sorted out. All in all, the total additional production costs will be around 20 percent compared to last year.

The additional costs can only be passed on in part to the trade and ultimately to the consumer, says Lukas Scholz, managing director of several production companies at Gemüsering. "It's a very fine line to adjust prices so that the product still remains attractive and sellable. Together with the LOF Group, we operate a second plant in Klinga, Saxony, where historically, chicory consumption is somewhat larger. Prices in both regions are almost similar and only slightly above last year's levels. The decisive factor will now be the development of electricity costs. In this respect, we can expect a season with many uncertainties."

German chicory as a barbecue side dish
In recent years, regional chicory has been able to establish itself quickly, the partners say unanimously. Every single sprout that leaves the Wesel darkrooms is marketed in the region. Buchmann: "This is, of course, an interesting unique selling proposition that can also score points with the trade. Surprisingly, however, chicory has also been able to establish itself as a summer product. Chicory continued to be sold even at 40 degrees Celsius, partly because the product is finding increasing acceptance as a barbecue side dish. Chicory is still primarily a winter product, but consumption is tending to become more consistent throughout the year." 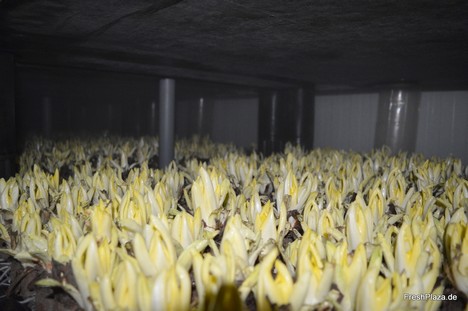 Chicory in the darkroom

High proportion of fine roots
How this year's season will develop in terms of yield and quality is still unknown, Buchmann continues. "The new-season roots are certainly a bit finer, so whether the shoots will ultimately be of smaller calibers as well, remains to be seen," Scholz adds, "If we had had the lush volumes from the previous year, the marketing pressure would have been considerably greater. However, higher-priced products such as chicory are not a consumer priority in these times of rising inflation, which is why, all in all, we are observing a relatively balanced market situation." 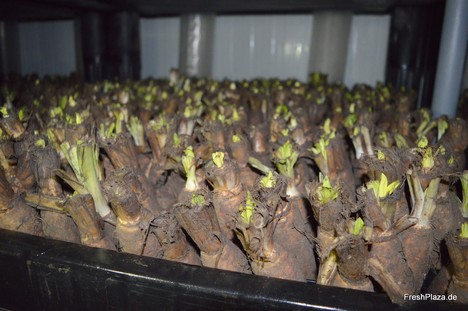 Roots from new crop: the first sprouted plants are already being brought to market.

"Chicory is versatile, easy to process and can be utilized almost entirely, which is why there is very little waste. If we compare it with asparagus, for example, the difference is considerable. Whenever chicory appears in a cooking show, demand skyrockets," Buchmann adds. Marketers are endeavoring to bring the vegetable closer to the consumer as well, says Scholz. "Again and again, we are presenting chicory at trade and consumer fairs. Also, the product is becoming more prominent in social media." 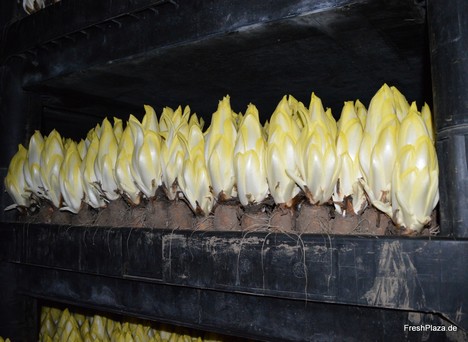 Sprouted chicory from the old harvest. The sprouts are still predominantly packaged in 500g flow packs. 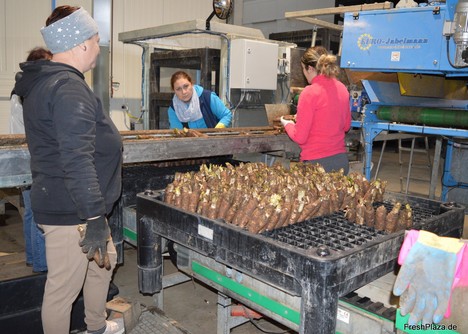 Growing market share
Chicory expert Jan de Vries points to the various buyer groups. "Some 30 to 40 years ago people already said that younger generations were not consuming enough chicory. But I find it more worrying that chicory consumption among older buyers - especially in the traditional sales markets of the Netherlands, Belgium and France - is tending to decline further."

According to Scholz, there is no talk of declining consumption in Germany. "On the contrary, consumption and market shares are continuing to grow. This may also be related to the increasing degree of self-sufficiency. In this respect, we are confident that the German chicory market will continue to develop in the coming years."