"We can easily store and market our pumpkins into January"

For 45 years now, Meckenheim farmer Heinz Gieraths has been involved in fruit production. Where once apples, raspberries and the like grew, the grower nowadays only devotes himself to growing open ground strawberries. Pumpkins - Hokkaido and Butternut - have also been growing and thriving at the Gieraths fruit farm for several years. The demand for domestic pumpkins has grown strongly in recent years, Gieraths tells us.

From about May to October, everything at the Meckenheimer fruit farm is aimed at the strawberries. Subsequently, everything slips seamlessly into pumpkins, Gieraths says about the seasonal sequence. "About 7 or 8 years ago, we planted the first hectares, and now we produce pumpkins on about 35 hectares, of which 70 percent is Hokkaido, 20 percent is butternut and the remaining part are made up of ornamental and other pumpkins. In the Meckenheim region, which is predominantly characterized by fruit growing, I am still one of a few farmers who are involved in pumpkin production." 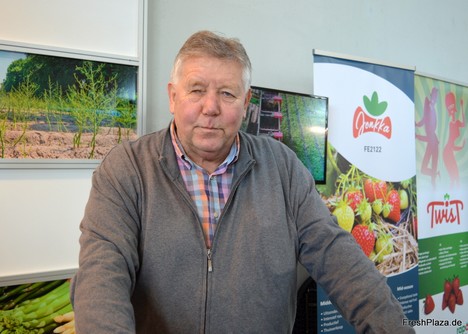 Heinz Gieraths inquired about the innovations and developments in strawberry cultivation at this year's expoSE.

Good pumpkin season
It is mainly the commercial Hokkaido pumpkin variety that is being grown, with supplementary production of the butternut squash, which is also becoming increasingly popular in this country. "We market our yields either to regional grocery stores or to private buyers. Although the main season is still concentrated in October and November, we can now store and market our pumpkins into January without any problems," Gieraths continues.

Despite the omnipresent cost increases with which the Meckenheim farmer of course is confronted as well, he looks back on an overall good campaign. "The 2022 pumpkin season will be remembered as successful, both in terms of quality and quantity." Although trade prices are only slightly above last year's level, a further price increase would have been desirable in view of the aforementioned additional costs in cultivation. However, according to Gieraths, there would also be new marketing opportunities. "Many Ukrainian refugees eat plenty of pumpkins in their homeland, which is why consumption has increased noticeably in recent months. I also still see room for improvement, especially since pumpkin is an inexpensive vegetable grown here. However, everything stands or falls with the wage and harvest worker issue, which is the longer-term challenge we have to overcome."

'The good times are over'
The passionate grower looks back on a long career in fruit growing and has seen the structural changes in the sector first hand. "We used to be able to sell our strawberries as far south as the Netherlands. Those good times are gone for good, we will just have to accept that." What will happen to the fruit farm in the future, when Gieraths will one day retire, is still up in the air. "There is no succession plan so far."