"You can harvest as many vast quantities of excellent apples and perfectly store them in dynamically modified conditions as you want. But, if you don't know the market, that will all be for nothing."

"Our company has some hard-earned experience regarding exporting to alternative markets. The sector should see Russia being closed as an opportunity to seek new horizons. Some years ago, there was an embargo on wine, and at the end our wine's quality shot up, new markets were opened, and now we export to more than 58 countries. I'm convinced that the ban will help us in the end to increase the quality of our fruits, to consolidate efforts and to find new markets for our products. The government must participate too. For example, they must try to open new markets like Egypt and India for apples, or China for cherries," Vitalie begins confidently.

From Odessa to Constanza
Most of its overseas exports were done via the port of Odessa in Ukraine, which is no longer an option. That has moved to the Romanian port of Constanza. "That harbor has, of course, been hectic since the war broke out. So there are quite a few challenges there. We already have four containers ready for Qatar in this new season. And several more will follow to the United Arab Emirates and other Gulf states soon."

In its early days, Fresh Time did a lot of direct exports to small Russian, Belarusian, and Kazakhstani companies. Through bigger traders, Fresh time products were supplied to modern retailers in those countries.

"Three years ago, we sent our first container to the Middle East. Last year, we clocked in at 20. We made contacts at international trade fairs. Middle Eastern buyers want Royal Gala apples with more than 75% color with stripes. We have very nice colored Gala Buckeye Simson, Gala Dark Baron, we're able to sell another good variety of apples like Golden Delicious Reinders, Granny Smith, Red Chief. One-quarters of our apples, by the way, are Gala. Last year we also shipped a few containers of Granny Smith and a few of Goldens. Not that many like Gala, because Iran supplies Golden and Red Delicious at low prices till end of February, on that market," says Vitalie.

You must know the market
He explains that, even if they have the correct varieties for the Middle East, it is vital to understand where and when to enter that market.

"It can't be all season. Fortunately, we have good cold storage in Moldova. Last year, about 100 containers of Moldovan apples reached the Arab market, either through direct sales or not. Some found their way there via a Spanish company, for example."

"That market has huge potential, but you have to have several things under control. Packaging is one, as is logistics, because ultimately, your company must be profitable. I, for instance, always compare prices to the various ports. Transport prices to Jebel Ali (U.A.E.), Doha (Qatar), Dammam (Saudi Arabia, Persian Gulf), Jeddah (Saudi Arabia, Red Sea), or Haifa (Israel) can differ tremendously, depending on the time of year," the commercial director says.

You often gain knowledge of a market via trial and error. "Last year, I sold a few containers of Granny Smith to different customers in the Middle East. Some of apples had a slight rose blush. Not much, but that eventually became an issue, and they made a claim. But the quality wasn't the actual problem; the shipment simply didn't happen at the right time and delivery was made after holidays. I'd misjudged the market. One client wanted to get rid of the load or at least get a considerable discount."

"I briefly considered other options, but the claim was just as much as it would've cost to transport the apples elsewhere. You have to do business with the right people at the right time. That's what I learned," is what Vitalie concluded.

He adds that competition from Poland is not as fierce in the Middle Eastern market. "The lower container availability in Gdansk pushes up apples' logistics costs. They could drive their fruit by truck to Italy and load it onto a ship there. But that, too, is expensive. During that time, Serbia became a big competitor in the Middle East market."

Different markets have their own opportunities and hurdles
Vitalie is actively exploring opportunities in different markets: "We should definitely consider Israel. We made great contacts at Fruit Attraction in Madrid last year. Still, it's not an easy market: they want many certificates, and customs clearance is often cumbersome and not very smooth.

"In Western Europe and Scandinavia, Poland, in particular, has a foothold, but there may be opportunities for us this year. Libya offers an outlet for our less popular and Class II apples. We have also begun talks with West African traders, but logistical problems around container availability are surfacing. We've even done transport sums via a French port, but, with the current fuel prices, road transport there costs are too much."

Closer to home, Romania's market could be interesting. "We have a supermarket customer there. But supermarkets want a constant, year-round supply. Even though we're first and foremost a grower and thus cannot meet that requirement, we got entry to that project. Last season, when our own supply was lacking, we sourced apples from other Moldovan growers. We can't say it went badly, but they mainly wanted cheap varieties. We sent Golden and all kinds of red varieties, including Idareds. It let us bypass the Russian market, to which transport was costing nearly $10,000 per truck. In cherry season, $15,000 isn't uncommon. That's about $.080/kg," Obrijanu says.

Russia is not stagnating
Moldovan growers will never have the luxury of the Russian market again. "Even if Russia were to reopen for our products, they're steadily building their own crop. And they have massive orchards. They could even become a net exporter. But for now, that scale has one disadvantage for fresh market produce: they can't harvest all those apples on time. When Galas are ripe, they must be harvested within five days if the weather is warm; otherwise, they start cracking. That's very difficult to organize when you have roughly 300 hectares of that variety. And Russia is focused on just a few varieties. In Moldova, we have a greater variety and can spread the harvest better," continues Vitalie. 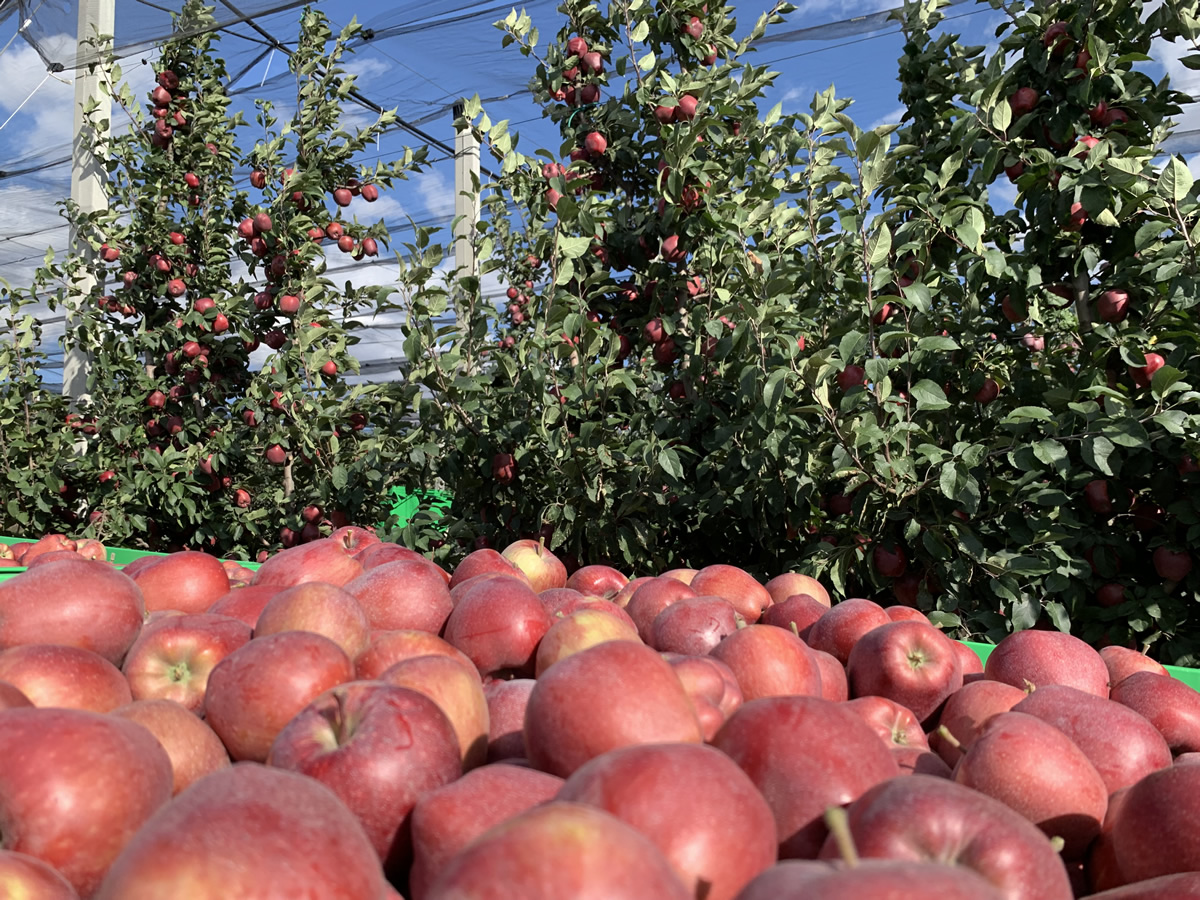 When galas are ripe, they should be harvested within five days

Vegetable farming could offer a solution
He is concerned about what the high electricity prices will mean for storage costs in the short term. "In the medium term, we must hope Russia doesn't take more ground in Ukraine and stays away from Odessa. Because if that city falls, they will be very close to Moldova. The war, sadly, is all-important. But if we were to ignore that for a moment, the biggest long-term challenges are the increased production costs and the stagnation of consumption and price. I'm talking about apples."

"More stone fruit could, then, be interesting for Moldova, both for sales on the [Western] European market and processing. Berries and vegetable cultivation also offer prospects because outside the summer season we import a lot from Turkey. If we were to scale up cultivation and freeze or can part of it, we could store our own production for much of the year," Vitalie concludes.

Fresh Time is a relative newcomer. It began in 2012 when a new apple orchard was established with trees and advice from Italy. It currently has 45 hectares of high-density apple trees, 14 hectares of cherries, 50 hectares of tart cherries. Gala, Golden Delicious, Red Delicious, Granny Smith, and Jonagold take precedence among the apples. Among the cherries it are Kordia, Regina. and Skeena.

To distinguish itself in the market, the company plans to introduce its own Fresh Time brand. The plots are spanned with anti-hail nets and equipped with drip irrigation. Advanced technology for storage (capacity of 4,000 tons), grading, and packaging comes from Italy, the Netherlands, Belgium, and the United States. The company is Global GAP&GRASP certified. 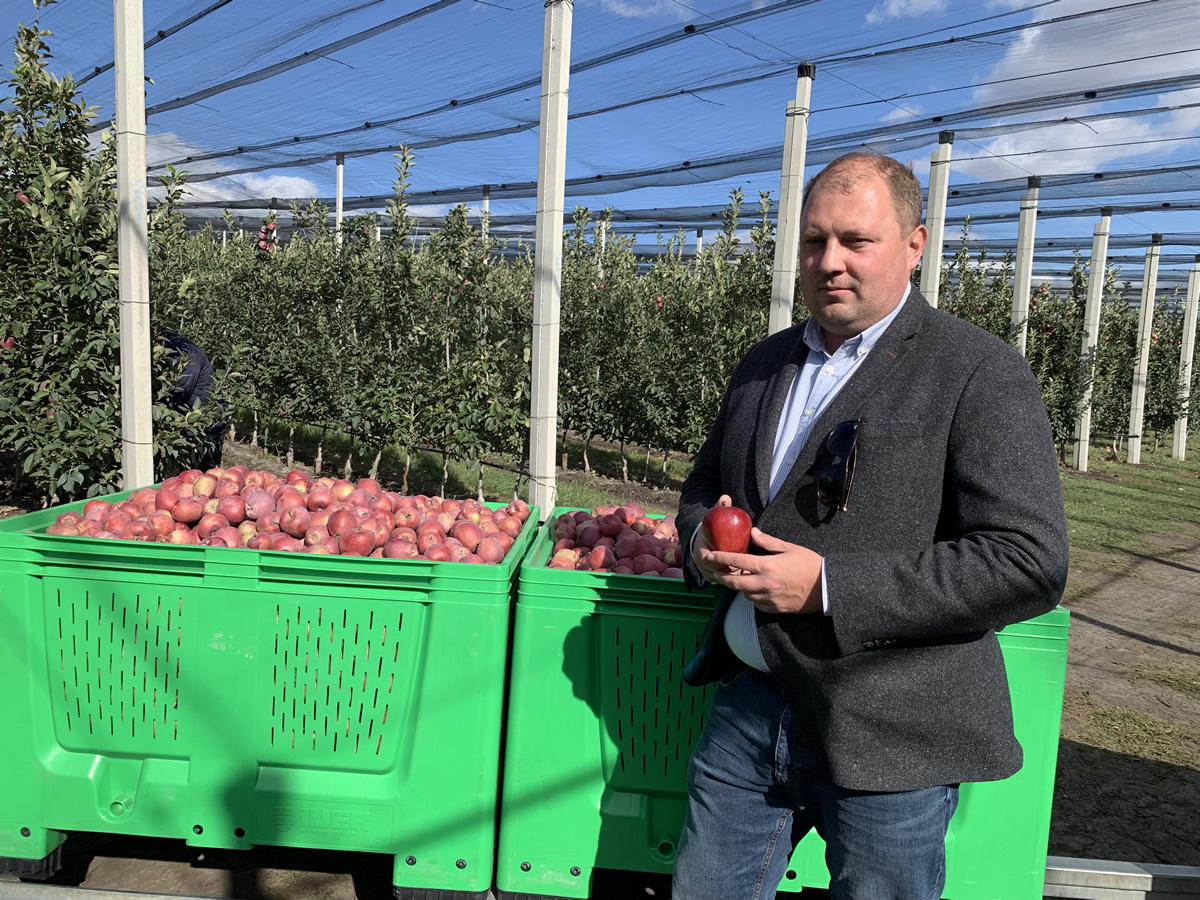 Click here to take a virtual tour of Fresh Time.