Interpom goes through at the last minute, receives 11,768 visitors

The 20th edition of Interpom, held in Belgium, is done and dusted. The theme was 'Let's reconnect the potato chain'. The event brings together potato growers, processors, packers, buyers, and traders. Last week it was still very uncertain if this fair could take place.

However, it is classified as trade, not an event. It could, thus, go ahead, after all. And now, the organizers can reflect on a successful event. About ten percent of the exhibitors canceled or did not show up. Despite this, there were still around 300 companies present. 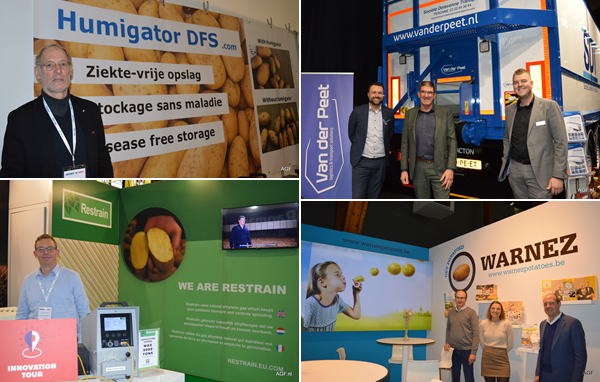 COVID-19 policy and being responsible
Doing the rounds at the trade show revealed that each stallholder interpreted the COVID-19 policy noticeably differently. The trade show and all the exhibitors' protocols were not always in line. Some businesses chose to have unmanned stands.

Other spots were empty, while people at some stalls seemed to be having a party. These did not heed the COVID-19 policy at all. The fair's organizers did their utmost to emphasize individual responsibility. That was, however, ignored in several cases.

Interpom received 11,768 visitors over its three days. That is less than the previous edition. But that was to be expected, given the measures and quarantines. And difficult international traffic, which affected the international presence. There were fewer visitors from the Netherlands, Germany, and countries outside Europe.

This year, France and the Netherlands were equally represented. That is, of course, due to each country's stricter COVID-19 measures. When the exhibitors were asked about their experience of the fair, they were remarkably positive. The visitors were of good quality, except for Sunday. That is considered a tourist day.

Fewer people attended the trade show, So, there was more time for people to visit in a targeted, professional manner. There is much deliberation around whether it makes sense to keep Sunday as a fair day. Canceling that day, and dropping its tourist character, could further professionalize the event.

The intention is to organize another Interpom in 2022. It is planned for November 27, 28, and 29 in Kortrijk Xpo, Belgium.