US elections and what the Trump win could mean for NAFTA, TTP

The beginning of November brought the American Presidential elections and many in the field of fruit and veg wondered what the new president elect would mean for the industry.

Before the election results, we published two articles presenting both vantage points from people in the industry. One who was backing Hillary Clinton and the other who was backing Trump. After it was announced that Trump was the winner, many Canadians and Mexicans were left wondering what impact this would have on trade in near future, specifically in regards to NAFTA. Companies in Asia were also wondering what the effects will be for the ASEAN countries and Obama's Trans Pacific Partnership (TPP).
However, many doubted that a change to NAFTA would impact the fresh produce industry. Canada, for example, has a negative trade balance with the US as it is, importing more than it exports to the US. Shortly after the election, China said that it would promote an alternative to the Trans-Pacific Economic Partnership Agreement (TPP) during the Asia-Pacific Economic Cooperation (Apec) meeting, in Peru; taking advantage of the new US President's, opposition to the pact . 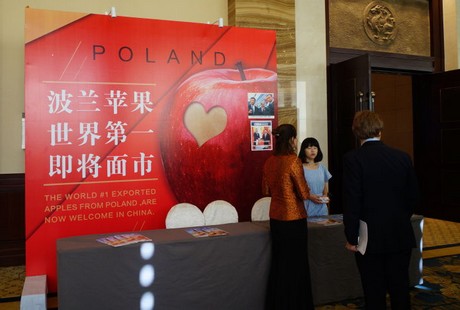 Much awaited news for Polish apple growers
After years of preparation and numerous inspections, the Chinese AQSIQ has officially announced that fresh Polish apples are allowed for import to China, according to The Polish State Inspectorate of Plant Health and Seed (Państwowa Inspekcja Ochrony Roślin i Nasiennictwa). A list was published by the AQSIQ (General Bureau of Quality Supervision, Inspection and Quarantine of the PRC), of all of the 453 Polish orchards and 135 Polish packers, thus making trade official.

On November the 23th, the first batch of Polish apples arrived at Chengdu International Airport. In total, 2.2 tons of apples were shipped on this first transport.

New records broken in November
Around the world, it was reported in November that growing records had been broken. With an early spring and good weather this Autumn, Irish production was reported to have doubled. Con Traas, from The Apple Farm in Tipperary, estimated that this year's production (excluding cider fruit) would total between 12-15,000 tonnes this year, a production increase of 100%.

In the Southern hemisphere, New Zealand was also set to grow its largest ever export apple crop of 21.5 million cartons worth a record $800 million. Pipfruit New Zealand chief executive, Alan Pollard, said the success of New Zealand’s apple industry was breaking all records.

Unfortunately the news wasn't as rosy for grape growers in neighbouring country, Australia. Hail, heavy rain and strong winds in north-west Victoria destroyed table grapes destined for this year's harvest and buds setting for next year. CEO of the Australian Table Grape Association (ATGA), Jeff Scott, said the damage bill was still being counted but the loss would impact the whole Australian market and they were predicting around 10 to 15% damage across national production.

In America, Adam Cooper, Vice President of Wonderful Halos, reported that the company was starting their 2016–2017 season with its biggest crop yet. “Supply is up about 9% - another record crop and we’re very excited about it,” said Cooper. “We’re continuing to harvest and it’s going well. We’ve never done marketing this early before so it’s exciting to have our campaign launched already.”

South America was also seeing good volumes of mangos out of Ecuador in November, shared Tom Hall with Freska Produce.

Events
The very first edition of the Amsterdam Produce Show took place in the Westergasfabriek in the first week of November. 1000 people had registered to visit the event, not a number most people would get exited about, but the stand holders were unanimous in their praise for the show, "Here you talk directly to the buyers that you want to talk to." The visitor were also impressed - many of them admitted to coming "Just to have a look".

China FVF held in Beijing, was also held during the first week of November. Participants were enthusiastic about the topics and the quality of the seminars, unfortunately visitor numbers dropped during the second day, which disappointed some of the traders and stand holders. The following week brought another event in China, this time in Shanghai, organised by iFresh China. The show provided an array of popular Chinese fruit and veg, including fresh apple and pear varieties, large amounts of kiwifruit, citrus, melons, and tropical produce from the South of China, such as mangoes, papaya and wax apples.

The third edition of the PMA Fruittrade fair was held in Santiago, Chile on the 9th and 10th of November. The event was attended by more than 80 exhibitors. The program included 4 seminars and 7 technical sessions and there were more than 30 talks on the fruit and vegetable sector, as well as round tables for business purposes.

The 8th edition of the exhibition, WOP Dubai 2016, got underway during Nov.13 - Nov. 15. The event, held at the Dubai World Trade Centre, welcomed a total of over 7,000 attendees, with the idea of becoming a vehicle for business opportunities in the fruit & vegetable industry and its supply chain, dealing with all aspects of logistics and handling and is seeking to become the biggest stage for new products in the Gulf region.