Italian table grapes still dominated the scene, but their presence was limited, in line with the season. In some places, traders took advantage of the limited availability to push through price increases. The relevance of Turkish Sultana and Crimson Seedless also decreased noticeably, according to the BLE. Spanish Aledo, Greek Thompson Seedless and French Alphonse Lavallée did not advance beyond a supplemental status. 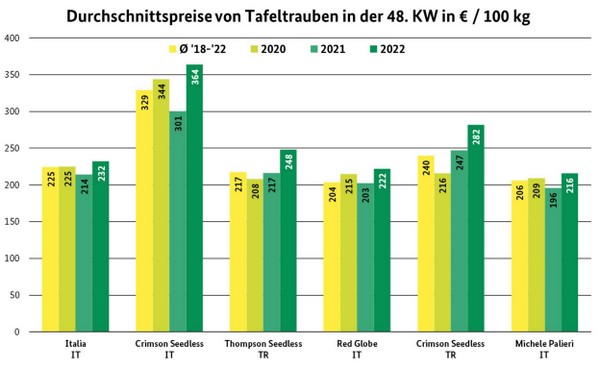 Overall, supply was sufficient to meet demand. If the quality was convincing, the previous prices were able to maintain their level. Imports from Peru became more important: Red Globe, Crimson Seedless and Sweet Sapphire were some of the varieties that could be used. However, the fruits were still relatively expensive, which is why they attracted little attention. This was also true for Brazilian products, which, all in all, had a complementary character. 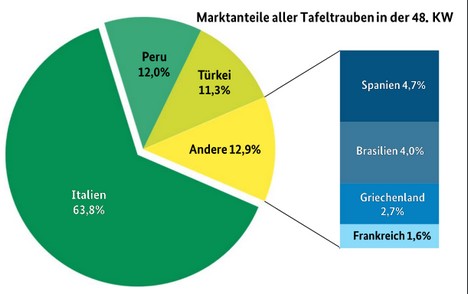 Apples
The assortment remained unchanged: Local offers dominated. Italian and French products followed in terms of volume. Deliveries from Belgium, Poland and the Netherlands had a supplementary character. Demand was not particularly strong. Christmas apples, mostly Red Chief, were popular with customers in Berlin and Hamburg.

Pears
Italian Abate Fetel, Santa Maria and Williams Christ dominated, more so than Turkish Santa Maria. From the Netherlands, Gute Luise and Conference were predominant. Domestic Conference, Alexander Lucas and Gute Luise rounded out the ranges. The trade was unexciting: availability was more than enough to satisfy demand without problems.

Oranges
Spanish Navelina were more than plentiful: they obviously dominated the action and marginalized the other varieties and origins. Valencia Late, Midknight and Delta Seedless were still available from South Africa, purchased primarily for juice production. Despite this, their presence dropped off, in line with the season.

Small citrus
Spanish deliveries predominated in the clementine sector. Sporadically, they were flanked by a few Italian and Moroccan shipments. The autumn weather made for more customer interest. The approach of St. Nicholas Day also improved sales.

Lemons
Spanish lots predominated. Turkish imports followed in terms of importance. Imports from Italy and Greece complemented the market. As a result of colder and wetter days, demand increased. However, prices did not move up in general.

Bananas
Supply and demand balanced each other out in most cases. In terms of prices, changes were hardly discernible. Only in Cologne there were discounts for secondary brands from Panama and Costa Rica.

Cauliflower
French and Italian items outweighed Spanish and Belgian goods. Dutch lots disappeared almost completely from the range. The season of domestic goods ended with the sale of the last products.

Lettuce
Iceberg lettuces came in from Spain exclusively. Sales were slow. The supply was sufficient to meet the demand. Prices mostly remained stable, but in some cases they trended downwards as a result of an excessively large assortment.

Cucumbers
Spanish cucumbers dominated, with only minor shipments from Belgium, Morocco and the Netherlands. In Berlin, Spanish goods took advantage of their monopoly position and became more expensive. In Cologne, they initially became cheaper, before prices rose again towards the weekend.

Tomatoes
A wide range of supplies was available, with Dutch and Belgian supplies predominating. Deliveries from Morocco and Spain came in second. Turkish and Italian batches had a more supplementary status. The first Tunisian cherry tomatoes arrived in Frankfurt, costing €12 per 3 kg.

Sweet peppers
Spanish shipments predominated. They were accompanied by Turkish and Moroccan imports, but only reds and greens were available. Dutch peppers exited the market during the week.