The area under citrus cultivation in South Africa has grown steadily over the past decade, driven by ongoing investments on relatively high earnings from export markets. As a result, South Africa is set for record citrus exports of 2.7 million tons in marketing year 2021/22. However, the expansion in citrus orchards is expected to ease in marketing year 2022/23. Accelerating farming input costs, higher shipping rates, new phytosanitary regulations imposed by the European Union, inflationary pressures on consumers in key markets, and infrastructure inefficiencies are challenging South Africa’s citrus exports. These factors are reducing the profitability of the sector, resulting in restrained investment in the industry.

Oranges, Fresh
Area Planted
Citrus orchards in South Africa account to more than 100,000 hectares (ha) of which oranges orchards represent approximately 47 percent (see Figure 1). The area planted to oranges grew by almost 14 percent over the past seven years or by an average two percent per annum. Growth in orange area was limited by an aggressive shift to soft citrus in the growing regions of the Western Cape and Limpopo provinces.

Post anticipates growth will be only marginal in Marketing Year (MY) 2022/23 at 48,130 ha. Accelerating farming input costs, higher shipping rates, infrastructure inefficiencies, including electricity supply disruptions (see Load shedding the Achilles heel to the South African agricultural sector), ineffective ports operations (also see Labor Strikes Could Cripple South African Agricultural Trade), deteriorating road networks and new phytosanitary regulations oppose by the European Union (EU), are diminishing the profitability of orange producers and limiting continued investment in the industry. In MY 2021/22 orange area grew by an estimated two percent to 47,750 ha, from 46,809 ha in MY 2020/21. Figure 2 illustrates the growing trend for area planted to oranges over the past seven years. 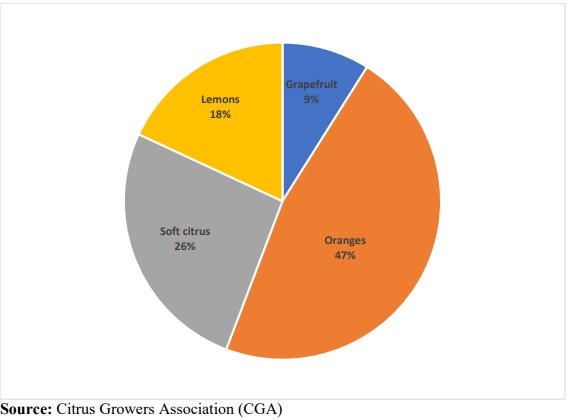 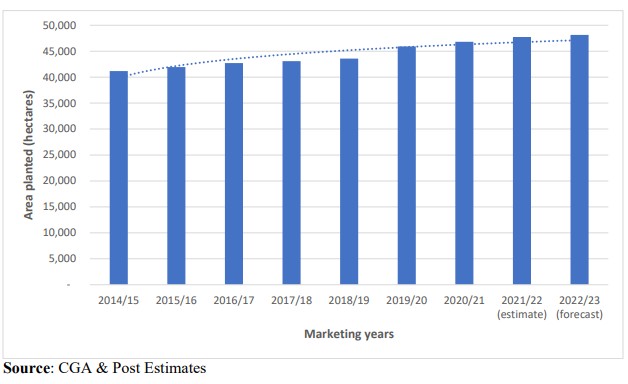 The Limpopo province is the leading growing region for oranges in South Africa, accounting for 48 percent of total area, followed by the Eastern Cape (23 percent) and Western Cape (14 percent) provinces. Valencias account for two-thirds of total orange area, with Navels accounting for the other third. The predominant cultivar planted is the Midnight, representing 25 percent of total area, followed by the Valencia Late (10 percent), Delta (9 percent), and Turkey (7 percent) cultivars. Other cultivars planted in South Africa include Bennie, Palmer, Cambria, Bahianinha, and Washington.