Knowing, for sure, that your crop is infected before the plants show signs. Growers have wanted that since the Tomato brown rugose fruit virus (TOBRFV) reared its ugly head. And preferably quickly, too. This summer, the Dutch company Spark Radar launched a grower test kit for that. Growers can use it to detect, with high reliability and within three hours, whether their crop is contaminated.

According to Spark Rader's co-founder, Rogier van der Voort, its virus test's reliability and sensitivity can well well-compared to that of a PCR test. "However, you don't have to send our test's samples to a service lab. That saves considerable time - crucial when detecting and containing a possible outbreak."

When the COVID-19 pandemic broke out, he and Bas Rutjens, who founded Spark Genetics, put their heads together. That company has been supporting breeding companies with genetics issues since 2018. "When the pandemic began, the laboratory had to partially close. We started asking ourselves how we could offer the market something that was much needed. That had to be a reliable, sensitive pathogen test that anyone could perform on-site," says Rogier.

Testing before symptoms show
The test works pre-symptomatically, meaning you can test for the virus' presence early. Rogier draws a parallel with COVID-19. "You can now do a self-test for that. But, that's an antigen test you use when you're already showing symptoms." In the case of the coronavirus, for example, a runny nose.

One of the ToBRFV's symptoms is spots on the fruit or signs on leaves. "Antigen tests, however, aren't as reliable as PCR tests, and their lower sensitivity means they don't work pre-symptomatically. You can also only test two to three plants at once," Rogier explains.

Leaf material
Currently, growers can test 60 plants at a time using Spark Radar test kits. Testing can be done in three ways. "We started with leaf samples. A piece of leaf the size of a fingernail is enough. Growers collect the leaf sample in a bag we provide, and once collected, testing can begin."

The test kits include the test material and hardware so that growers can run the tests themselves. "We've developed equipment to read the tests. We use magnetic and sensing racks for that. The magnetic rack lets us extract the virus from the sample, which helps ensure our tests' high sensitivity," Van der Voort continues. 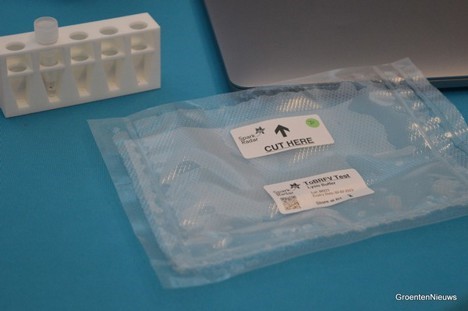 A part of the test kit. The white container is lined with magnets. Detection is done using a different rack.

Surface and water tests
Growers, however, prefer to test more than just leaf material. "There's plenty of market demand for swab tests too, which allows for testing for the presence of the virus on things like carts or blades. It's like the cotton swab you use in your throat and nose when doing a COVID-19 self-test."

They developed a third testing protocol for water. "Growers can test for the ToBRFV in, say, their drainage system," Rogier elaborates. These last two testing methods are currently in their final market introduction stages. "We're fully in the testing phase for these new applications and are using trial feedback to make the swab and water test kits are durable as possible." The company plans to market these two testing kits in December commercially.

International
Spark Radar also wants to start offering the kits internationally, and this fledgling company has taken the first steps toward that. "A large North American party has been using our test for several months. They want to deploy it more widely during the next harvest period. We have a commitment from a Dutch party with overseas farms too. They want to use our tests outside the Netherlands," states Rogier.

A virus test must be reliable. The test kits, thus, include a clear manual (you can also watch an online video). For now, it is in Dutch and English, but the company wants to include other languages as well. "We're currently focusing on producing the tests. We've gained new clients after presenting the test at a recent event."

Testing for other pathogens
ToBRFV is undoubtedly receiving global attention. That begs the question: Does Spark Radar have the clout to help growers combat this virus? Spark Radar's co-founder thinks so. "We were recently chosen to participate in the Foodvalley and government investment fund, InvestNL's Fast Lane program. We had to give an answer to what's needed to become even more influential, scale up and maintain our test's current and projected speed."

That speed does not only apply to the ToBRFV but to other plant viruses, bacteria, and fungi. Spark Radar is also working on a test kit for cucumber fur virus and Pepino mosaic virus in tomatoes. "Those will be similar tests to the ToBRFV ones," concludes Rogier.