Winter watermelon demand increases by up to 70% over past four years, says Martin Michael from Exec-U-Fruit 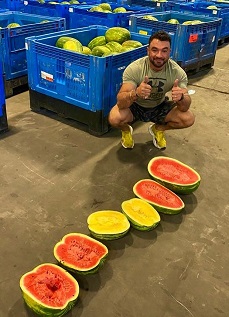 “We took a bit of a knock with Covid which stopped watermelon exports dead in its tracks but it’s starting up again, not yet back at pre-Covid levels, but I expect it to keep growing. The exports have picked up very nicely,” observes Martin Michael, watermelon trader at Exec-U-Fruit market agency at the Johannesburg municipal market (right).

Buyers for the tourism, catering and processing industries in Mauritius, Madagascar and Zanzibar procure watermelons throughout the year from South Africa.

At the moment between 5 to 15 tonnnes of watermelons are flown out every second day to hotels and resorts on the Indian Ocean island of Mauritius where tourist arrivals have increased hundredfold from January to July last year to the same period this year.

After several months of no connecting flights between South Africa and Madagascar (due to a diplomatic row between the two countries), watermelons are again bought in Johannesburg for catering and processing in Madagascar. 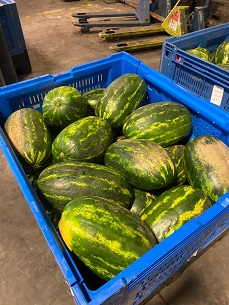 Watermelon supplies are now, in the middle of winter, at its lowest ebb, but for the last seven years Exec-U-Fruit has gone right through the year with watermelons grown in Waterpoort, Musina and Tshipise (Limpopo Province).

There is always the risk of frost, so planting watermelons to ripen during winter is a gamble, but they have been rewarded over the past six years: in winter 2020 watermelons were sold for a record R200 (11.9 euro) per unit.

“The watermelons are averaging 10kg, so we’re looking at anything between R13 (0.77 euro) to R15 (0.89 euro) a kilogram. It’s mainly, 85% for processing, with watermelons cut up and put into tubs. Another 10% is bought by catering and the other 5% is for wholesale, where it’s halved and sold for around R75 or R40 for a quarter watermelon.”

“I try and get my hectares up every year because I never have enough supply, and there’s a huge demand. We’re going to try to up the hectares by 15ha for next season. The growers may take a very big chance in planting for me but it does pay off. It’s paid off the last six years.”