Friday, January 20, the short-term TTF gas price closed at just under 67 euros per megawatt hour. During last week, the price rose due to more wintry weather. Electricity prices are also on the rise. In this new crisis update, we list the price and market developments again.

TTF gas price for February 2023 to January 20. The following Monday at 10 am, the gas price is again around 64 euros per megawatt hour. Click here for up-to-date figures.

Prices for winter 2023 are even above 70 euros per megawatt hour again on Monday. On Friday, the contract for 'winter 2023' already closed at 76 euros.

BNR points to the gas price rise and to a prediction by experts from the US bank JPMorgan Chase. They argue that the coming period is also going to be tense, where more and more people are already quietly looking at next winter. "While the outlook has certainly improved, we still expect gas price volatility in the coming months." 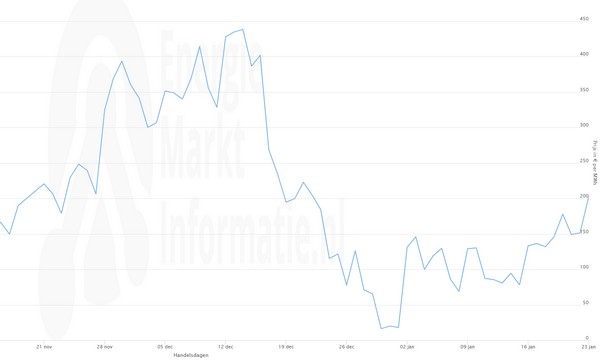 APX price development via elektriciteitsmarktinformatie.nl up to 23 January 2023. 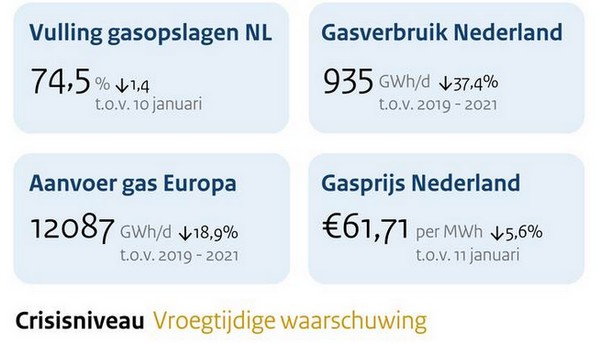 The European price cap on gas may cause market liquidity to decrease, although significant effects on trading transactions have not yet been observed. BNR writes about a Bloomberg publication. The news agency says the European Securities and Markets Authority is also set to announce that today.

Finally, a message from Gasunie. Because of the energy crisis, it talks increasingly often about hydrogen as an alternative energy source. The basis of a future Dutch hydrogen network is the current natural gas network of 12,000 kilometers of pipelines. Part of it will become available for transporting hydrogen. About 85% of the hydrogen network will eventually consist of existing pipelines, and the remaining 15% will be newly constructed.