Some two weeks ago, the last tomatoes of this year's season were harvested in the Naturland greenhouse of the Naderer family. "As far as the cucumbers go, we had to stop a little earlier than usual for several reasons, with the tomatoes, the finish was about identical to previous years. Overall, the yields of both crops were better than last year, as the climatic conditions, especially the hours of sunshine, were more suitable this year," says the organic producer based in Kirchdorf an der Amper, in Bavaria.

"We started with quite good prices: Then, at Whitsun, there was a drop in demand, especially for cucumbers, which created a marketing gap. During the summer vacations, we had a similar drop in tomatoes," says Naderer. "Of course, what also hits us particularly hard are the ubiquitous cost increases, whether in materials procurement or labor costs. Meanwhile, our prices have stayed the same and tended to be lower toward the second half of the season." The organic producer is still coping well with energy prices so far, partly because waste heat from a biogas plant is used to heat the greenhouses, and the price of heat is not rising too heavily.

Left: the last tomatoes of this year's season shortly before harvesting.
Right: Anton Naderer in his vegetable greenhouse

TOVs on the rise, declining demand for cocktail tomatoes
The range of products offered by the organic nursery has remained about the same in recent years, Naderer continues. "We produce regular cucumbers as well as mini cucumbers. Our tomato assortment includes TOVs, cocktail, oxheart, and San Marzano tomatoes. In the last phase of the season, in particular, we have noticed that the trend is somewhat moving away from the more expensive cocktail tomato in favor of the very normal, less expensive TOV. Furthermore, we are observing that sales in food retailing are continuing steadily, while consumers are leaving less money in natural food retailing. That is, the amount purchased per capita has become less in the latter sector, including vegetables."

After the vegetable season ended, part of the greenhouse was planted with leaf lettuce of the oak leaf and Batavia varieties. Leafy greens can usually be harvested in late January to mid-March, Naderer adds. "In January and February in particular, there has been good demand in recent years, which in turn was due to the frost and accompanying crop failure in Italy/Spain. Then, in March, the lettuce market is normally a bit more competitive, as lettuce from "cold houses" is already coming onto the market by then." 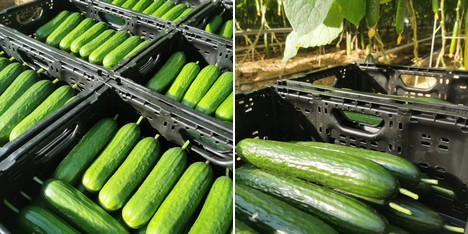 Despite pervasive cost increases and consumer restraint, the market gardener is cautiously optimistic about the future. "We have to get back to the sales we had in pre-Corona times. The big boom is over now, for the time being. Because of the adversity, I'm also not planning any product line or capacity expansions for now."