According to data recently released by the Datamar Business Intelligence team on the movement of containers on the Brazilian coast, in October, Brazilian container exports fell 5.08% YoY. In the first ten months of the year, container throughput dropped by 3.5% compared to January to October 2021, 83,571 TEUs less than in the previous year.

The chart below, based on data from DataLiner, breaks down the track record of Brazilian exports via containers and provides a clearer view of the scenario described above: 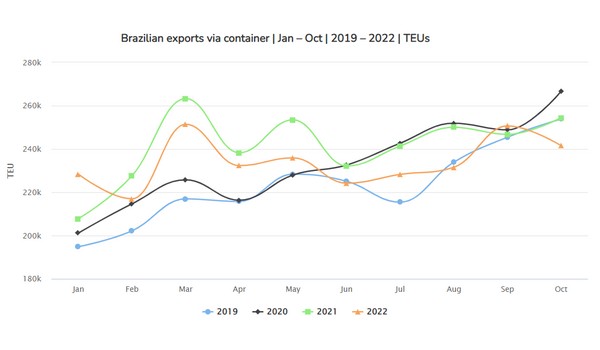 Imports
Brazilian imports via containers registered, in the first ten months of 2022, a drop of 4.4% compared to the period from January to October 2021. There were 98,405 fewer TEUs imported in 2022 compared to the previous year.

Despite this, in October, the balance ended in surplus: volumes were 12.9% higher than in the same month of 2021. This is visualized in the chart below: 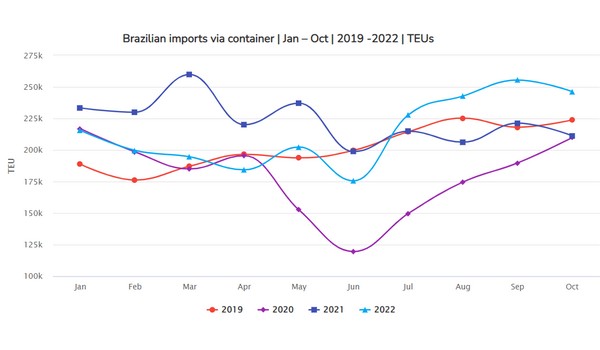 Brazil’s low level of trade with other countries continues to bring down sea freight. According to the latest Platts Americas Container Freight bulletin by S&P Global, released on November 28, freight rates to South America continue on a four-week-long downward trajectory. Sources say carriers have continued to reposition tonnage away from the flush trans-Pacific Lane towards Latin American and trans-Pacific trades, which has put pressure on rates even as demand has tapered off.