Less concerns about the ToBRFV virus this year in Sicily

"After a summer with a significant shortage of product, this fall, and winter, the Sicilian tomato sector is once again bringing to market an excellent crop, both in terms of quantity and quality," said Massimo Pavan, a grower with long experience in the interprofessional organization for the tomato sector. 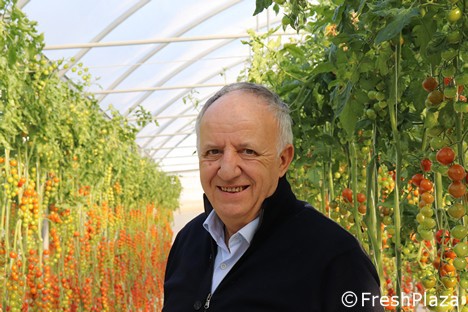 "The situation in the greenhouses this season is much improved compared to previous years," said Pavan. "ToBRFV is no longer such a big problem, partly thanks to the introduction of virus-tolerant varieties and partly because growers have learned how to deal with the problem after some difficult years. In 2022, the damage caused by the prolonged summer heat was even greater than that caused by ToBRFV. The summer lasted much longer than normal, with very high temperatures until the end of October. We have been able to harvest about half the number of tomatoes as a result."

"The prolonged heat, not only in Italy but throughout Europe, has also led to greater competitive pressure from all growing countries, especially from those that have been able to harvest longer than normal because of the unusually mild climate. On top of this, there are competitors such as Morocco and Turkey, which have shown export figures growing at double-digit rates since 2021. These two countries are now increasingly exporting to central and northern Europe since logistical difficulties due to the ongoing conflict have forced them to drastically reduce exports to Russia. They have a massive presence in the European market, and their prices are much lower than ours. Indeed, they have lower labor costs and are therefore much more competitive," explained Massimo Pavan.

"A few weeks ago, we finally started the winter harvest. These are tomatoes from plants planted in August," continued the manager. "There is enough product, and the quality is good. We are, again, on the domestic and foreign markets, but grower prices are on the low side. At €1.30-1.40 per kilo, our prices are just above the cost of cultivation. However, November is traditionally a month when sales lag a bit behind. We are confident that in December, as usual, sales can step up a notch."

"Despite the many challenges and difficulties, I would like to convey an optimistic message because this year, our crop is looking very good, and a good product always guarantees good sales. Now we have to concentrate on the season that will peak in a few weeks. We have to think about how to ensure the satisfaction of our customers, but especially the consumers from half of Europe who are again looking forward to our tasty and healthy tomatoes," concluded Pavan.