Entrepreneurial spirit, commitment to agricultural – specifically fruit-farming - and the presence of an opportunity that would forever change the way South African fruit is to be exported, led to the formation of Cape Five twenty-five years ago. It was in 1997 when Wayne Mudge, who hails from an apple and pear farm between Elgin and Villiersdorp in the Western Cape, teamed-up with four like-minded individuals to form Cape Five, one of the fruit exporters heralding a new chapter in the history of this sector after the single-channel exports system that had controlled the country’s forays into international markets was scrapped.

“Coming from a family who had been farming in the Cape since 1954 and having experienced the restrictions of the erstwhile single-channel system which, was proclaimed by government in 1926, I always felt that our fruit industry’s true opportunity could not be realised under that situation,” recalls Wayne. “With a whole world out there comprising a diversity of markets and customer requirements, it just seemed enormously restrictive having one body unilaterally telling farmers what can be exported, to where and at what price.”

In fact, Wayne was not initially involved in the South African fruit industry at all, despite having a BSc Agriculture degree from the University of Stellenbosch. Instead, in the beginning of the 1990s he chose to go to Scotland and England where he worked on various farms and later for companies marketing fruit and vegetables. 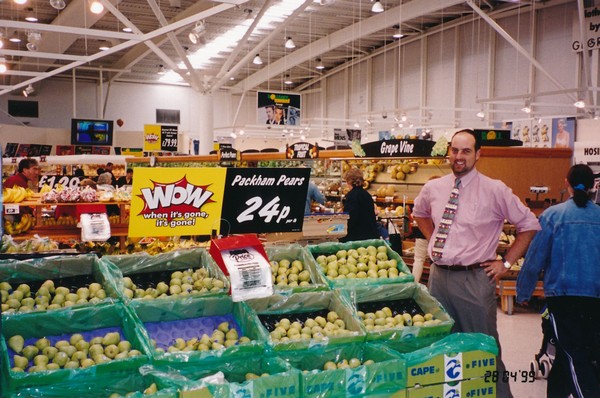 “I was always more interested in the business side of agriculture despite having an interest in plants,” he says. “While at high school I was already growing plants to sell-on to nurseries, so as far as my outlook on farming was concerned, the entrepreneurial and business aspects rose above the others.”

Returning to South Africa from the United Kingdom in 1996, Wayne found talk of the scrapping of the single-channel system gaining momentum. “In this sense I see the establishing of Cape Five something that began with my grand-father when he was running the family farm and involved with exporting apples and pears,” he says. “My grand-father always made his opposition to this restrictive system known. Having travelled the world looking at the international market he realised that the opportunities for farmers in the global arena were far greater than the single-channel system allowed. If I look back now, part of the motivation for starting Cape Five was definitely spurred by his influence.”

When the archaic system was eventually scrapped in 1997, Wayne teamed up with four like-minded partners. The other founders were Peter Degens, Tom Snoek, Peter Newton and Chris Baard, a combined team with experience in shipping, production and finance, and with contacts in the European market. This group formed Cape Five, the initial strategy simply involving walking the farm-roads looking for growers willing to partner with the new company by providing them with fruit and entrusting Cape Five to unlock value for them in the global marketing space. 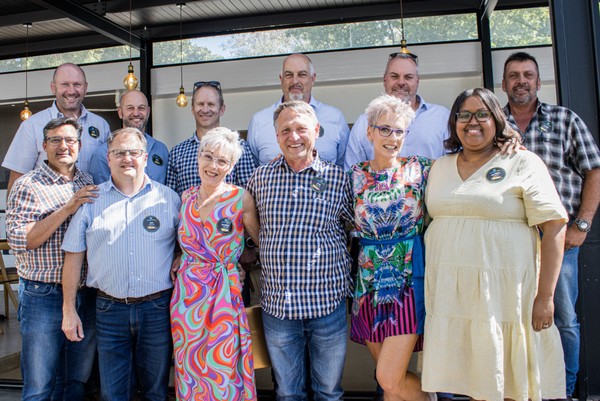 “We put together a comprehensive presentation and used our combined contacts to get time with farmers in an attempt to convince them that our proposition was a better one – for now and for the future – than the one they were sitting with before,” says Wayne.

He is quick to emphasise that Cape Five was definitely not alone in attempting to draw producers into joining the opportunities offered by this new deregulated environment. Literally hundreds of other independent marketing bodies were attempting to sell the same pitch to the country’s farmers, making this kind of business an extremely competitive one.

“Initially we focussed on apples, pears, stone-fruit and table grapes, with some citrus,” says Wayne. “One of the key pitches Cape Five had was to cut-out costs in the supply chain. A lot of fat had been built into the traditional system, and we put much focus on being leaner and more streamlined – from packing-house to international delivery – with this more cost-effective approach allowing us to pay our growers more. Sometimes double what they had been getting under the old dispensation.”

Cape Five had since its inception decided that transparency had been a key element lacking in the single-channel system, and from day one this has been a core value in their relationship with growers.

But it was definitely no plain-sailing, with those first few years being pretty turbulent. “There was scope to go direct to the markets and cut out a lot of costs, and we and the other new players brought transparency to the table,” he says. “But on the other hand, with so many new players in the arena the situation was extremely un-coordinated. There was not much information, so none of the exporting companies could not tell what the others were was doing, leading to oversupplies.”

“We started out with three full-time staff members, and in the 1997/1998 season shipped 150 containers, mainly to the UK and Holland,” he says.

Cape Five, however, grew rapidly from the outset, sometimes giving prices back to growers that were double what other exporters were paying. Some growers would give Cape Five a trial before signing-up in the following year.

“We gradually expanded from selling to Europe with new customer bases in Africa, the Middle East and Asia,” says Wayne. “I don’t think we were particularly innovative in kicking down doors to new markets ahead of anyone else – post-1994 the world had opened to South African exporters. Cape Five just wanted to do things better…for the customers at the other end as well as for our growers.”

The company’s core values are deemed as a wide basket of products, good consistent quality, an ability to respond to market requirements, flexibility and value-to-quality ratio and flexibility. “Reputation and relationships have obviously played a key-role in our growth over the past 25 years,” says Wayne. “Experience and longevity give an aura of trust, which is very important in the business of fruit exports.”

These relationships obviously extend to growers. “South Africa produces good quality of fruit throughout the board,” he says, “but it is our task of continuously directing the farmer on what the market wants. In turn Cape Five’s role is to maximise value for the grower. And with a substantial customer base we like to think we can find a place and a price for the produce we receive from growers. However, the entire supply chain has to realise that it can’t grow too rapidly. This is a constant threat.”

In 2020 and 2021 Cape Five exported to 55 countries, but growth in Russia, China and the Middle East has been a highlight, especially in China where the company has its own office. “South Africa is strategically very well positioned to service the world,” says Wayne. “And developments in the orchards with new varieties of apples and citrus has kept our offering on the front-foot.”

However, being exposed to over 50 markets world-wide has given Cape Five a clear realisation of the vagaries in the global market-place and its challenges. “The Covid pandemic and its affect on China and the situation in Russia have disrupted the supply chain in ways we would previously never have thought possible,” he says. “And back home in South Africa fruit production is growing while at the same time infrastructure is not keeping up and production costs are increasing.”

But with the clear-headed and purpose-driven strategy that has seen it face its fare share of turbulence over the past 25 years, Wayne remains bullish in leading Cape Five into the future.

“Myself and my team have the confidence that comes with the belief that we know our way around,” he says. “We’ve got strategies to consolidate our position and to further expand our footprint. Not everything clear – it never is – but in terms of the supply chain, which includes cold storage, pallet- handling and transport we have the right strategies and partners in place.

“And with South Africa’s legacy of good farmers who understand their geography and are committed to delivering a quality product, Cape Five remains inspired and committed to unlock maximum value for all parties involved.”