A tour of the Checkers fresh produce aisles

There is a story behind each of the 800 to 965 lines in the fresh produce aisles of a Checkers FreshX store, where potatoes, bananas, tomatoes, apples and onions are always among the top ten sellers.

Riaan Sonnekus from Freshmark, the Shoprite Group’s fruit and vegetable procurement and distribution arm, and Nadia Pretorius, branch manager of Checkers Brooklyn in Pretoria, took FreshPlaza on a tour of their fresh produce aisles during a transition period in the crop calendar (and sure enough, during the visit the power went off but the generators quickly kicked in). Onions and sweet peppers: always side by side

“Onions are the most expensive they’ve been in many years and they’ll probably remain so until late October, when the Northern Cape onion harvest starts,” Riaan points out. He is the buying manager of Freshmark’s Midrand distribution centre, one of six distribution centres (with their own banana ripening facilities) that Freshmark has across South Africa.

“On the other hand, these are the lowest September prices on potatoes that I can remember over the past five or six years. After two bad years on onions, potato farmers planted 1,500 ha more potatoes and a lot less onions. There’s been a 40% price deflation on potatoes this month.”

At Freshmark’s distribution centres they handle perhaps the widest variety of fresh produce lines of any retailer in the country.

On his visits to their own stores as well as those of the competition, he can within seconds get a feel for the completeness of the fresh offering, Riaan says. This time of year the availability of, say, loose pears indicates to him the efficiency of the store’s supply system. 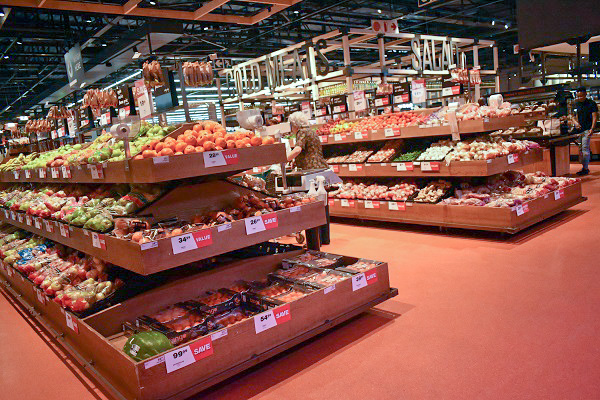 A fifth of their tomatoes come from ZZ2, the largest tomato producer in the Southern Hemisphere. The Waterpoort winter tomato harvest has just ended, now Mooketsi will start sending to market. “They have just under 2,000ha of tomatoes – you want to do business with a producer of this size,” Riaan notes. The tomatoes in front of us were grown on the South African side of the Orange River; around 10% of Checkers’ winter tomatoes are grown in Namibia.

Among their 450 or so supplying farms, only five are allowed co-branding with a small logo: vegetable producer Wildeklawer, apple and pear growers Tru Cape, berry growers Ozblu and Berryworld and sweet potato grower Langplaas. Uniformity of appearance is very important at Checkers stores (less so in their Shoprite stores which cater for middle to lower-income customers).

Massive citrus production results in price deflation
“Citrus producers in the north have finished and we now have the last push on the 6kg orange bags. Within the next two to three weeks we will reduce our range to only the 3kg, 2kg and 1kg bag of oranges,” he explains. Checkers sells oranges until January, the very last of the local crop is Valencias left on the trees in the Western Cape all that time. 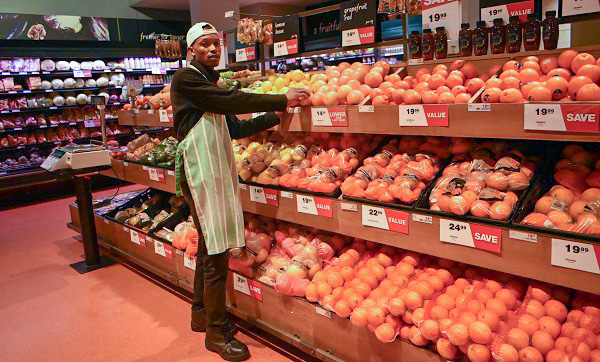 “This was the lowest we’ve paid for citrus in five to eight years. Citrus prices are 30% to 40% lower than last year. It all started with the international logistical chain’s disruptions during Covid and just escalated with the Russian conflict with Ukraine. We took advantage of the lower citrus prices to move 20% more citrus, especially on oranges, Tango Fruit and other soft citrus varieties."

At the moment lemons are probably at their lowest (R9,99 or 0.56 euro for a 1.5kg bag on the day of the visit) but within the next two or three weeks lemon prices will rise, Riaan says, because so many citrus producers are finishing their seasons. The beautiful lemons displayed on the days of FreshPlaza’s visit were harvested in the nearby Groblersdal/Marble Hall area.

Downward trend in apple sales
“We sell a lot of blueberries and strawberries and we could probably sell even more in future when we fill the supply gaps during the year,” Riaan remarks. 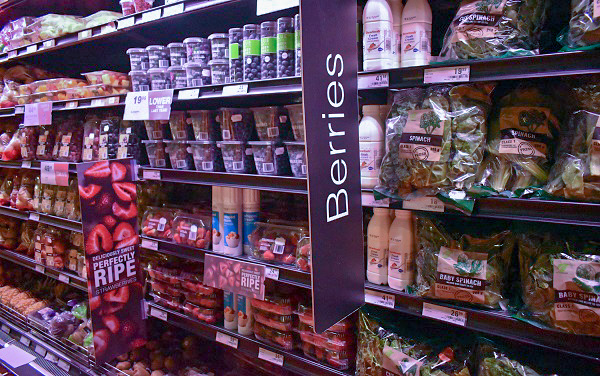 Stonefruit and grapes are still imported, but the first domestically grown peaches and nectarines will be on the shelves from October.

“Apple sales aren’t growing so great. Nationally apple sales have been flat the past two years,” Riaan says. “Quality apples are expensive, between R25 and R30 for an Econo 1.5kg bag. Yet, the municipal markets and streets are flooded with cheap lower quality fruit, putting sales at formal retailers under pressure."

He adds that a recent lowering in diesel prices has reduced their transport costs, but it still costs around R1,100 to transport a single pallet of apples from the Cape to Gauteng, containing 64 cartons on a pallet, which works out to a transport cost of R1,90 per bag of apples. 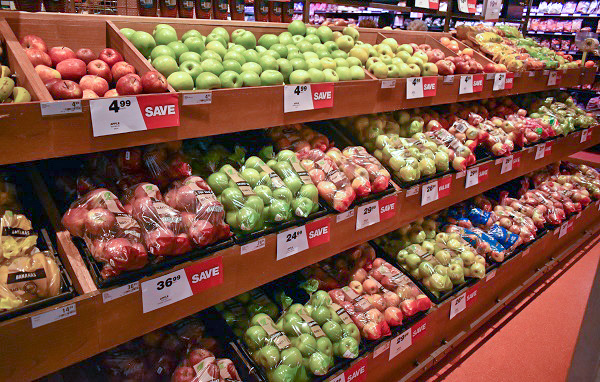 The preponderance of red apples tells you: this store is in the north of South Africa

Freshmark secures apples in Controlled Atmosphere rooms, and supply is still ample, despite the apple harvest ending in May. Braeburn and Royal Gala stocks are finishing off and towards the very tail-end of the season small size apples become scarce, but then the first of the low-chill Limpopo apple varieties are harvested.

Kale & red apples for the north, sweetcorn & Grannies for the south
“Here in the north the top selling apple will always be Top Red and Starking,” Riaan says. “In KwaZulu-Natal customers look for Goldens, the yellower the better, while in the Cape they want Grannies.”

The brassica season in Brits, close to Gauteng, has ended and it has moved over to the Eastern Cape, Western Cape and KwaZulu-Natal until next autumn when the season returns to the north. Baby spinach has seen good growth over the past few years, but it’s still significantly more expensive than Swiss chard. 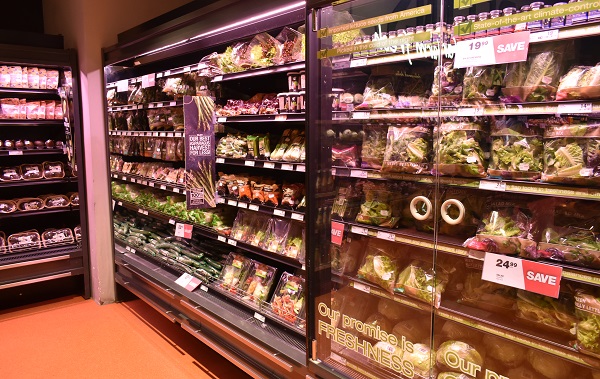 Around ten gourmet veg lines are grown locally and also imported from growers in Zimbabwe, Mozambique, Zambia and Kenya who specialize in these crops.

Kale bunches are in their second year on their shelves as a bunch.
“Our Limpopo stores sell kale and mustard leaf by the palletfuls, Zimbabweans like it a lot,” he says.

Most sweetcorn goes to stores in the Western Cape where they also send the marbled yellow-white kernel honey & pearl sweetcorn. 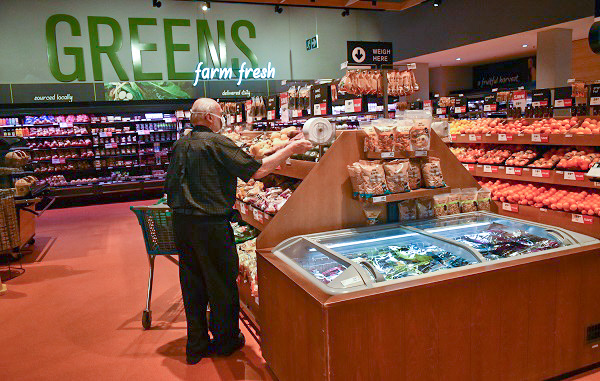 Discontinued lines over the past few years include large fennel bulbs in a sleeve (difficult to maintain production through the hot summer months), chicory and locally grown starfruit (carambola) because of slow sales or limited to no supply.

The stark decline in loose sales since Covid continues. Nadia notes that sales of items like loose potatoes or apples are down by close to 40%.

In touch with wholesale market movement
The retailer keeps a close eye on the country’s municipal markets, you have to, Riaan says, and Freshmark buyers visit the Johannesburg and Tshwane municipal markets every day to witness the endless fluctuations that lead to price discovery.

The retailer procures less than 1% of its products from the market, most notably watermelons, at the start of the season (which is a month earlier this year, he says). He remarks that they buy in such bulk that it would actually be a relief not to have to buy anything from the market. 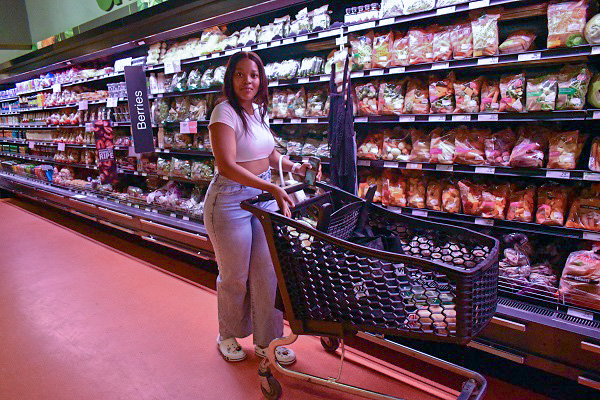 By 2025, Shoprite aims at 100% recyclable packaging
On some lines packaging size has decreased because of price points. There are, for example, no 5kg bags of carrots, only 3kg bags (for if you have rabbits, like Riaan) and smaller packaging sizes. Similarly on potatoes, they transitioned from a 10kg bag to a 7kg bag a few years ago.

Paper pulp punnets have replaced plastic punnets to a large degree, for instance in tomato and ripe & ready avocado packaging, although it’s more expensive than plastic.

“We’ve tried pulp punnets out on lettuce, but it absorbs moisture, so it doesn’t work very well,” Riaan says. 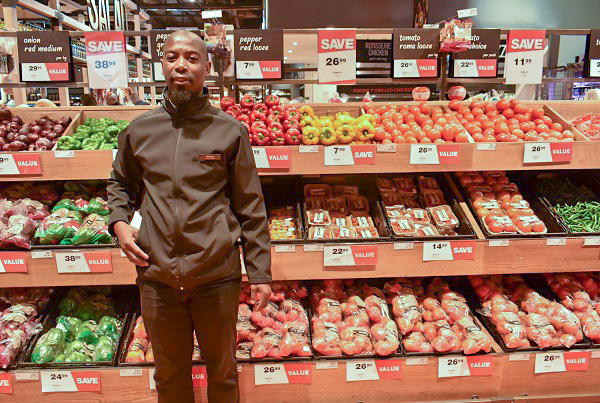 The company says that rationalising the packaging used in-store forms part of their hierarchal approach to waste, which prioritises the reduction of waste through design. A packaging sustainability officer was recently appointed to strengthen their capabilities in terms of research, pilots and implementation of alternatives. 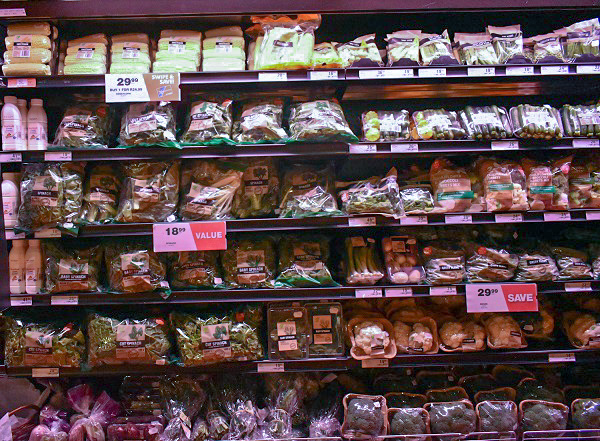 Uniformity across packaging is very important in Checkers stores

“In the year under review, we removed 140 packaging items. Technology is a vital enabler of our progress. We are in the process of building packaging needs into our recipes and reordering system that will allow us to better manage packaging stocks and losses from a centralised Group level,” the company states.