France: Short garlic campaign due to lack of volumes

The garlic campaign has been rather difficult this year. The harvests started slightly earlier, in June, but seemed “normal” at first. Then, the appearance of waxy breakdown on the garlic caused significant damage to the production.

“Initially, the harvest of purple and white garlic looked promising, but after drying, the product quickly changed. We noticed a significant sorting difference from our producers, but also here at the cooperative,” explains Céline Vezian.

Late frost episodes, water stress, high temperatures at the bulb and drying stages, all contributed to the appearance of this physiological disease. “We now have an enormous amount of sorting work to carry out. The head usually seems healthy to the touch but some pods can be affected on the inside.” 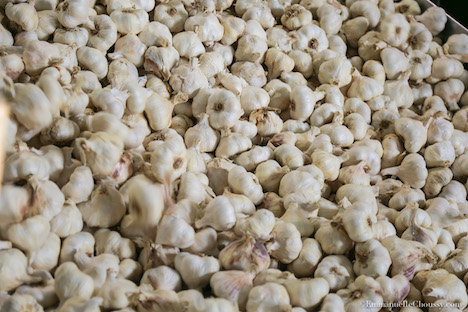 Yields reduced by 50% for pink garlic
For the pink garlic, the consequences are even more significant. “From the beginning of the harvest, we noticed a drop of 50% in terms of yields.” The impact is also felt on the calibers of the harvested bulbs. At the end of July, the Union of the Pink Garlic Red Label and Pink Garlic PGI of Lautrec warned that “the poor technical results of the current campaign are directly linked to the weather conditions and will inevitably lead to major economic losses for all garlic producers.” These losses even go up to 80% for some non-irrigated plots.

A shorter campaign
“Sales are fluid but the campaign will be shorter due to the lack of volumes,” explains Céline Vezian. The situation was discussed at a meeting organized by the French garlic interprofession.

“Two weeks ago, the interprofession met with the senator of the Gers department, Mr. Duffourg, as well as two mediators, Mr. Deville and Mr. Tregaro, in order to raise awareness among our clients about the approval process that has become complicated with our distribution channels, in addition to the fact that we do not want to disappoint the consumers.” There is currently a calamity file and the cooperative also met with the Departmental Directorate of Tarn-et-Garonne this week.