Hurricane Fiona made its way through Eastern Canada on the weekend and the region’s apple industry is seeing some infrastructure damage and crop loss because of it.

Nova Scotia: Michael Van Meekeren of Van Meekeren Farms in Kentville, Nova Scotia says there’s an estimated 10-30 percent loss across the region with Honeycrisp and McIntosh varieties affected most severely. “We are harvesting those varieties right now so they are ripe and ready and that’s probably part of why they were so affected,” he says. “They also come off a little easier. The weight of the apple and the way the stem attaches to the tree all matters.” 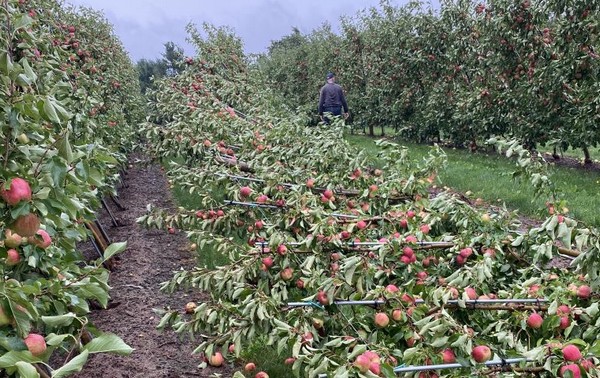 Ambrosia is also significantly affected in some areas. “They’re very susceptible to wind--the trees are very stiff so with a strong wind, the trees shake and the apples seem to fall off easier,” says Van Meekeren. Conversely, Pazazz and Gala have longer stems and are later for picking and are able to deal with the wind better.

Nova Scotia also saw the highest amount of trellis systems blown over and lost to date.

New Brunswick: This province also saw some damage to its trellis systems and some fruit loss. “New Brunswick’s wind level was similar to Nova Scotia’s--again it lost some Honeycrisp,” says Van Meekeren.

Prince Edward Island: Though this is a much smaller industry when compared to Nova Scotia, the province did see some 80 percent crop loss. “They were definitely wiped out severely because of the path of the storm,” says Van Meekeren. 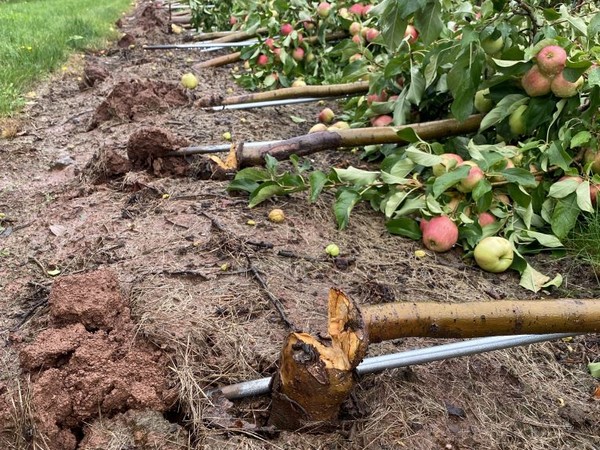 When compared to Hurricane Dorian, which also came through the region in early September 2019, Hurricane Fiona made its way through differently. “It seems that gusts were very high whereas with Dorian they weren’t. Fewer orchard systems fell over with Dorian and even though it was more severe crop loss, it had a much bigger impact than Fiona,” says Van Meekeren.

With Fiona, the estimate is that one to two percent of trellises were blown over. “But when you lose one percent even, you lose the next five to 10 years after having established that orchard for $30,000. It’s a bigger loss than just the apples,” he says, noting that Dorian did come through before the season began while Fiona blew through the region after the harvest had already started.

However, the industry did learn from Dorian not only by reinforcing the orchards but by protecting orchard blocks. “If you have a block, the outside one to two rows of trees get the most impact of the wind,” says Van Meekeren. “In some cases, we picked the fruit off the first one to three rows on the outside which allowed the inner trees to still be protected.” 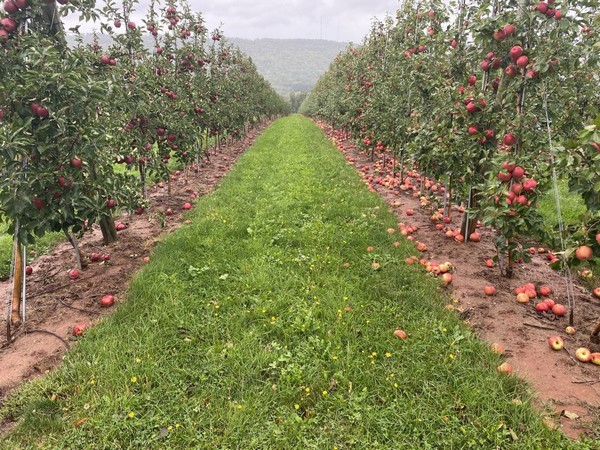 It also reinforced the notion that diversity of varieties within an orchard works well. “We wouldn’t have thought of that. You’d think that you’d want to plant the ones that make the most money,” says Van Meekeren. “But with some varieties like Ambrosia, for locations with high winds, I would see those growers not planting more or possibly even taking them out.”

Van Meekeren also adds that Eastern Canada was in line for a large crop of apples this season and had been looking into storage possibilities for its crop. “So we’re seeing that this storm has brought some balance and most of all we’re just thankful there’s still a very good crop out there for the year-long retail market,” he says.