Blank sailings have for long been the carriers’ preferred way of matching supply with demand; this is what we would call tactical blank sailings. However, for much of 2020 and 2021, carriers have struggled to maintain capacity in line with the stresses of demand, which meant that vessels were chock full, leading to terminals and ports starting to fill up (as containers could not be moved fast enough), and vessels started to get stuck outside of port. This level of port congestion meant that carriers could not fulfil their weekly departure obligations, resulting in forced or operational blank sailings.

In the past few months however, demand growth has stalled, vessels are not fully utilised, and freight rates have been dropping consistently and considerably. This is where the carriers would naturally resort to tactical blank sailings, to the stem the bleeding in freight rates. With Golden Week coming up (starting October 1st), it presents carriers with the golden opportunity to blank more sailings than they historically would, and likely come under less pressure from cargo owners, for artificially managing freight rates by cutting capacity short. 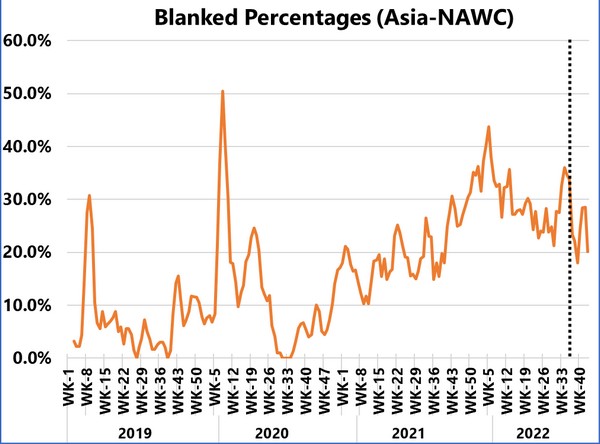 This is what we see as well, with carriers’ vessel deployment for the coming weeks. On the Transpacific, capacity reductions are slated to be 22%-28% of deployed weekly capacity in the weeks following Golden Week, whereas the peak reduction in those weeks was 15%-17% in 2019, and an average of 9%-11% in 2014-2018.