Codru will focus on stone fruit in the coming years

Organic farming is not big in Moldova. But, neither does that mean pesticides are used willy-nilly in fruit cultivation. On the contrary. "We have used far less insecticides because of the pheromones control system that we have implemented this season," begins Mihai Chilianu, CEO of Codru, a fruit-growing company near the capital of Chisinau.

"There's the occasional worm on a scab-infested apple, but certainly not in significant quantities. I insist on being able to pick an apple from my orchard and eat it on the spot without worrying about the presence of residues. MRLs aren't an issue for us when exporting," says Mihai, who promptly picks a Golden apple and takes a big bite. 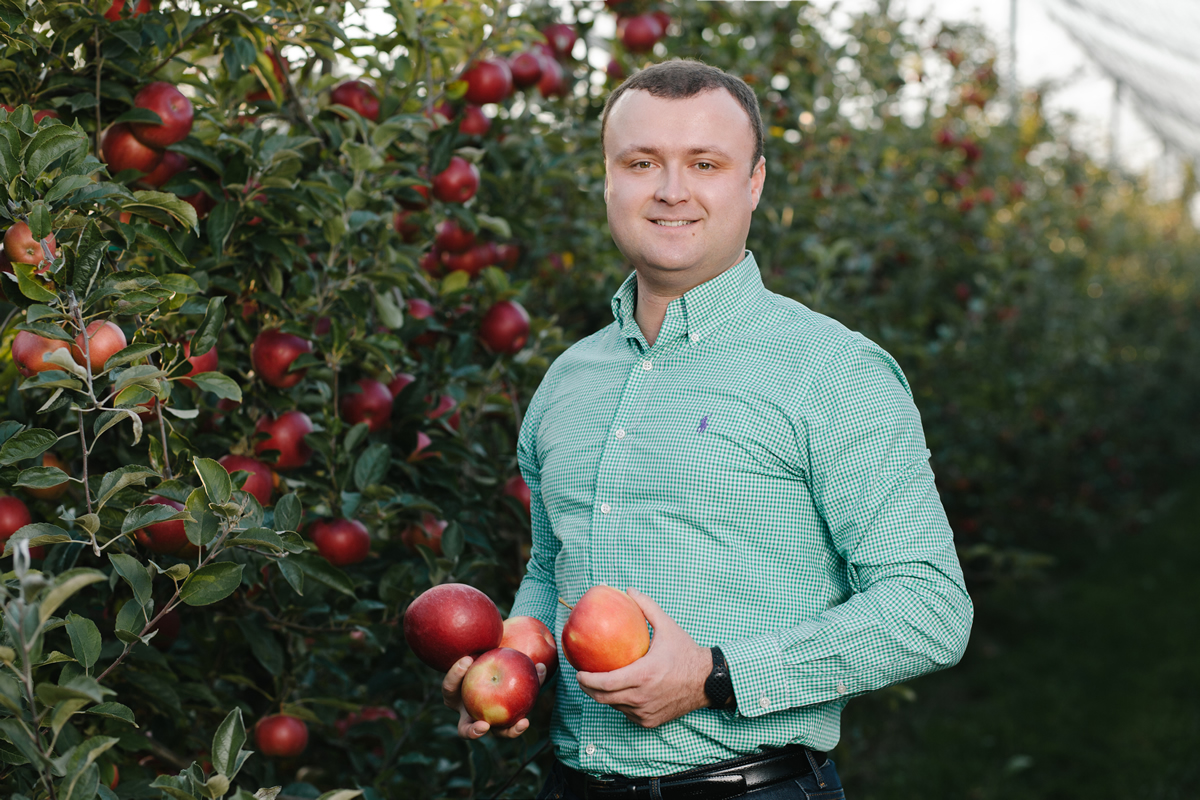 Because, as Mihai well knows, reputation makes or breaks exports. "Too many quality or phytosanitary problems will sink a country's name. Growers should all be mindful of that. That’s why I also advocate strict phytosanitary inspections in Moldova to prevent fruit that doesn't meet export requirements from crossing the border. By the way, you don't have to use plant protection products to guarantee quality. It just requires meticulous harvesting and good sorting lines." 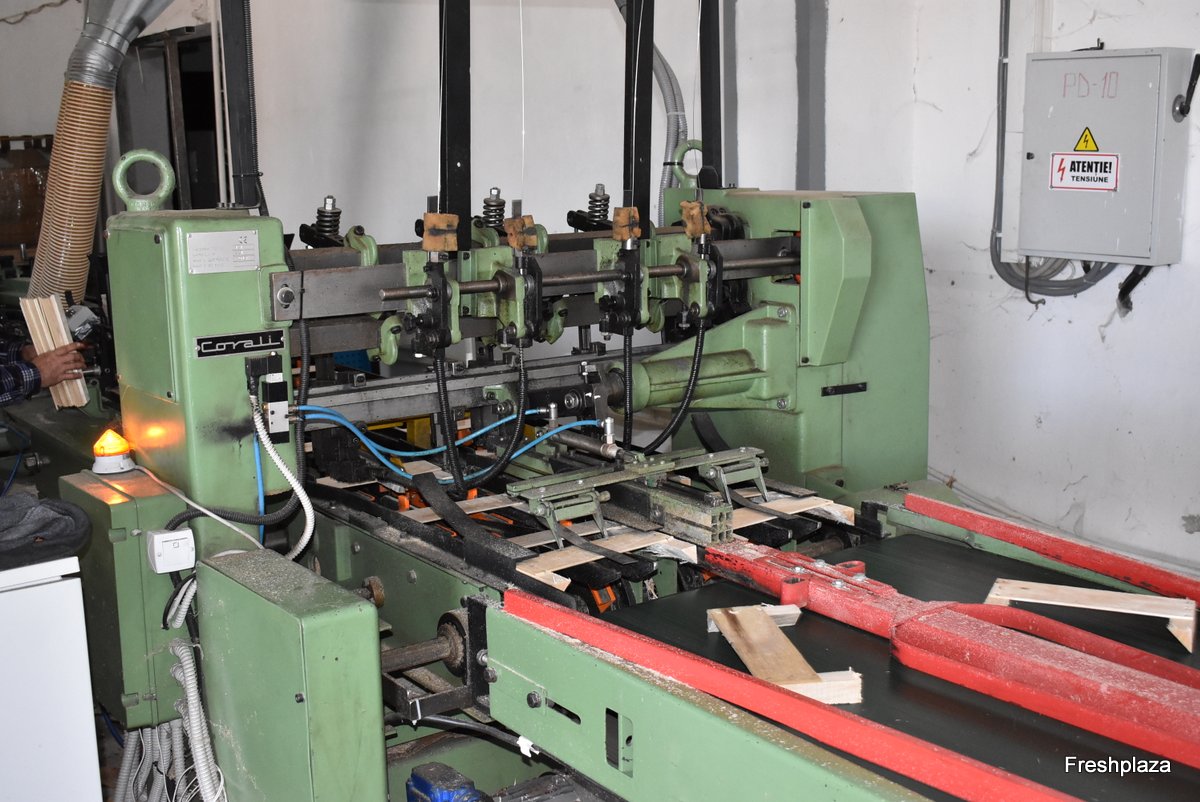 Own manufacture of wooden fruit crates

Spreading risk and harvest
Codru grows apples, stone fruit, cherries, and grapes. "We begin picking cherries in late May/early June. After that, it's the apricots' turn. Next season, we will also harvest tart cherries, mostly for the processing industry. But if we can sell them on the fresh market, we'll definitely do so; it pays better. Russians like a piece of sour fruit with their vodka, hence their preference for Idared apples, I think," jokes Mihai. He adds that choosing to grow many fruits and varieties has a two-fold benefit: It spreads the risk and distributes harvesting nicely over several weeks and months.

Two loads of apples a day
Apple picking starts in September and totals between 6,000 and 7,000 tons a year. With its apple sorting line, the company can fill two truckloads a day. Russia has never been Codru's apple exports' primary focus. "It's simply not an interesting market for us: they want quality but pay low prices. Although, quality is sometimes a relative term. For example, they like Goldens to be green, while that apple is at its most flavorful when it begins blushing. In Russia, a blushed Golden is considered a Class II apple." 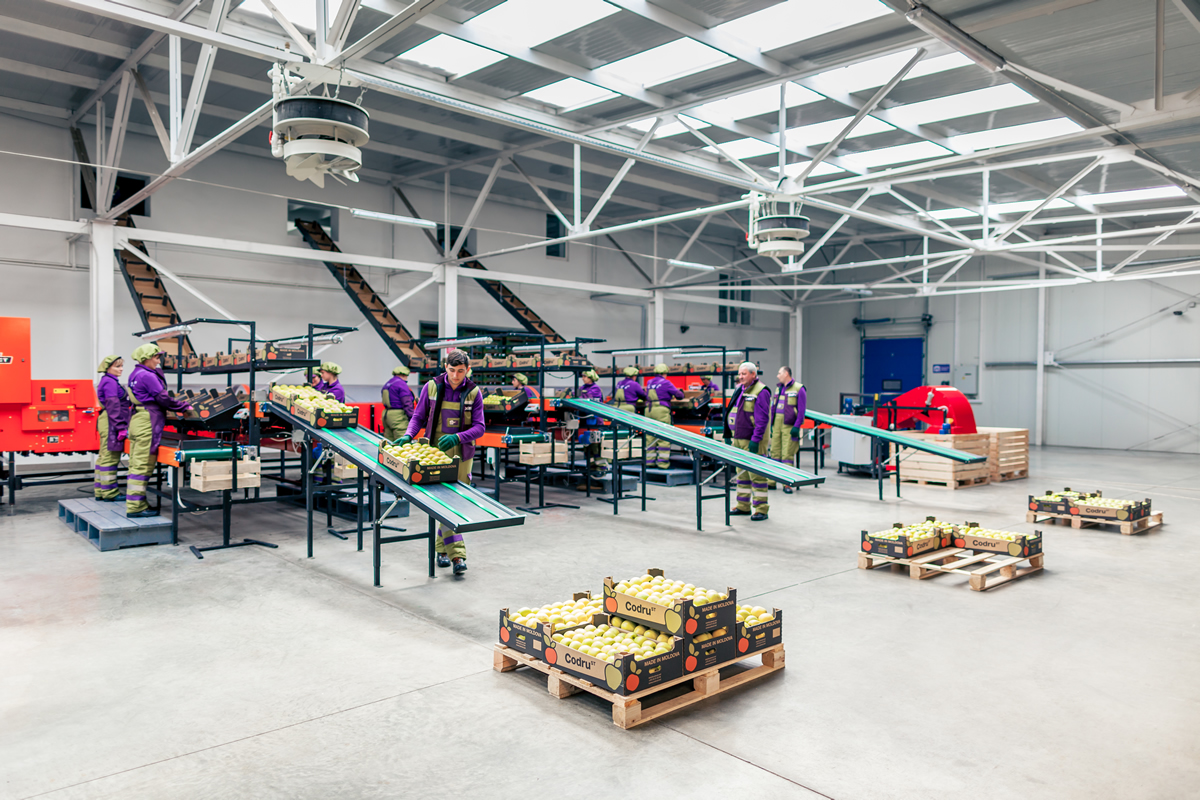 Codru can pack up to two trucks per day

In contrast, Codru is very interested in the Romanian market, thanks to its proximity. "It's a half-day drive from here to Bucharest. That transport costs €1,200, from Poland you can count on €2,500. That's easily a €0.05/kg difference. So, we have a huge competitive advantage; though it's not always the most profitable market. But it's stable, which gives us peace of mind. We have good connections there. We also benefit from the doubling the apple quota to the EU," says Mihai.

This Central Moldovan cultivation company prefers exporting to its western neighbor. Nevertheless, it is also turning its gaze to Bulgaria, where it sold quite a lot of Reinette Simirenko apples last year, and northern and western Europe. "The efficiency gains we're making in cultivation should help with that. I think the center of gravity of European apple growing will shift to Eastern Europe. And I'm not talking just of Moldova - we're too small for that - but Ukraine. That country has enormous potential." 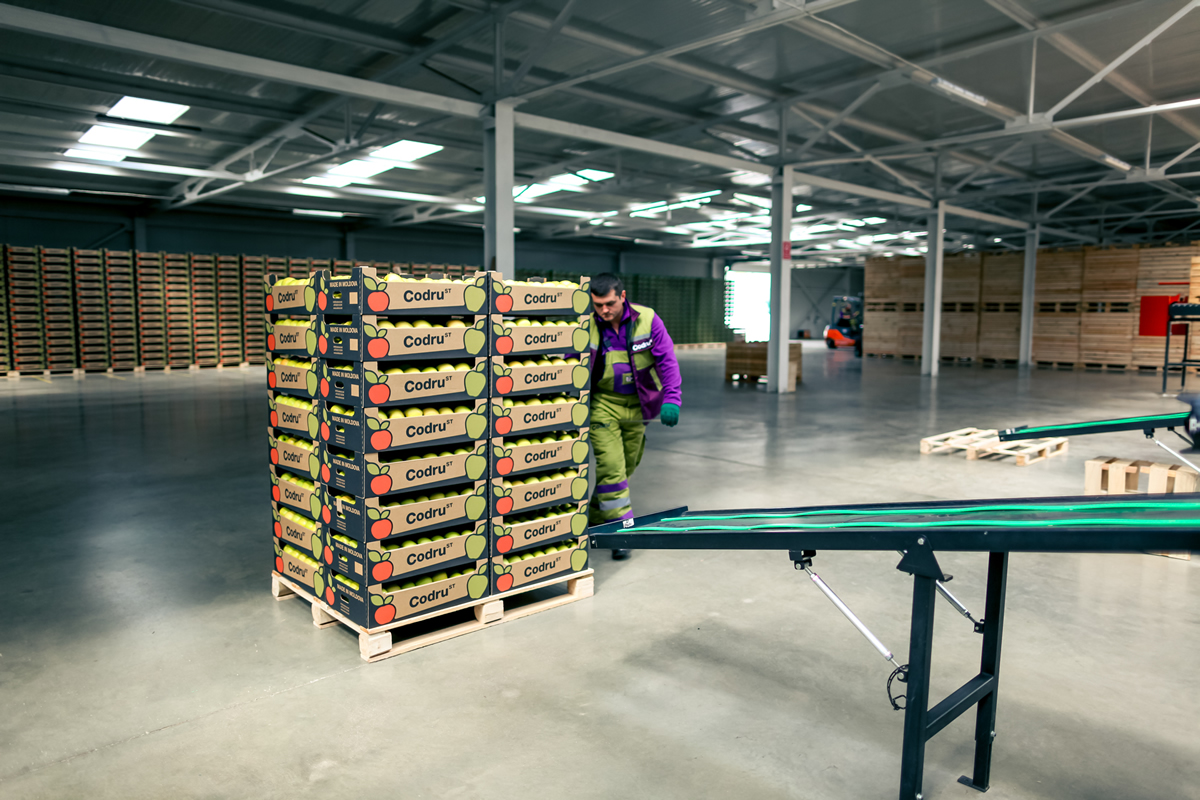 Plums deserve correct pricing
Codru is, however, going to focus on stone fruit. "Western Europe offers considerable opportunities for our Stanley plums and late apricots. Last year, plums were our orchards' most profitable crop. The destination market is [Western] Europe, especially Germany. We've already established a good reputation there. I don't foresee any problem, sales-wise, now that Russia has shut its market door. But I want to warn importers who treat Moldovan growers shabbily and offer prices well below the market average: we follow market developments and prices, and our tasty, quality plums deserve correct pricing. That, by the way, is a prerequisite for long-term business relationships. Are prices that are lower than two years ago normal, while transport costs have doubled?" Chilianu wonders.

Excellent flavor: Moldovan grapes' trump card
Mihai is also especially proud of their grape crop, which consists almost entirely of the local variety. "We grow the grapes traditionally, not on pergolas. With 18 hectares, the acreage isn't huge, but we love this crop and how we organize the cultivation. These black seeded Moldova grapes make the trip to our export countries, problem-free. Plus, they have a great shelf-life, taste good, and have fairly disease-resistant plants. We don't like to spray, and with these grapes, that's hardly necessary."

Are the grapes having seeds a disadvantage? "Perhaps. But the Italia and Victoria grapes also have seeds, and for now, there are no seedless varieties that can match these well-known varieties or our Moldova grape in terms of flavor. That these grapes are solely grown in Moldova doesn't indicate a lack of quality either. They've tried growing these in places like Romania and northern Macedonia, but those grapes' flavor is no match for ours," says Mihai.

"Italia grapes, too, are of the best quality when they can enjoy southern Italian soil and sunshine. We pick Moldova grapes in October and sell them until April. So, there are hardly any imported South African or Peruvian grapes here in the winter. We export to Romania, Poland, the Baltic states, Ukraine, and, until recently, Russia. This year, I'm planning some shipments to Saudi Arabia, where I see opportunities, especially in October and November."

Always searching for more efficient methods
To meet the increasing labor shortage challenge - many of the better workers prefer the higher wages abroad - Codru is always looking for more efficient growing, harvesting, and processing methods. "We'll soon grub and replant some plots with new varieties in a way that requires fewer workers for growing and picking. We, for instance, already have rows of apple trees that form a wall, so to speak: our people pick twice as much fruit there per day than in a traditional orchard. And what we plant, new, is immediately suitable for possible robotic picking in the future. The tart cherry orchards are four years old, and we'll harvest them for the first time next year. Those were set up with tree shakers in mind." 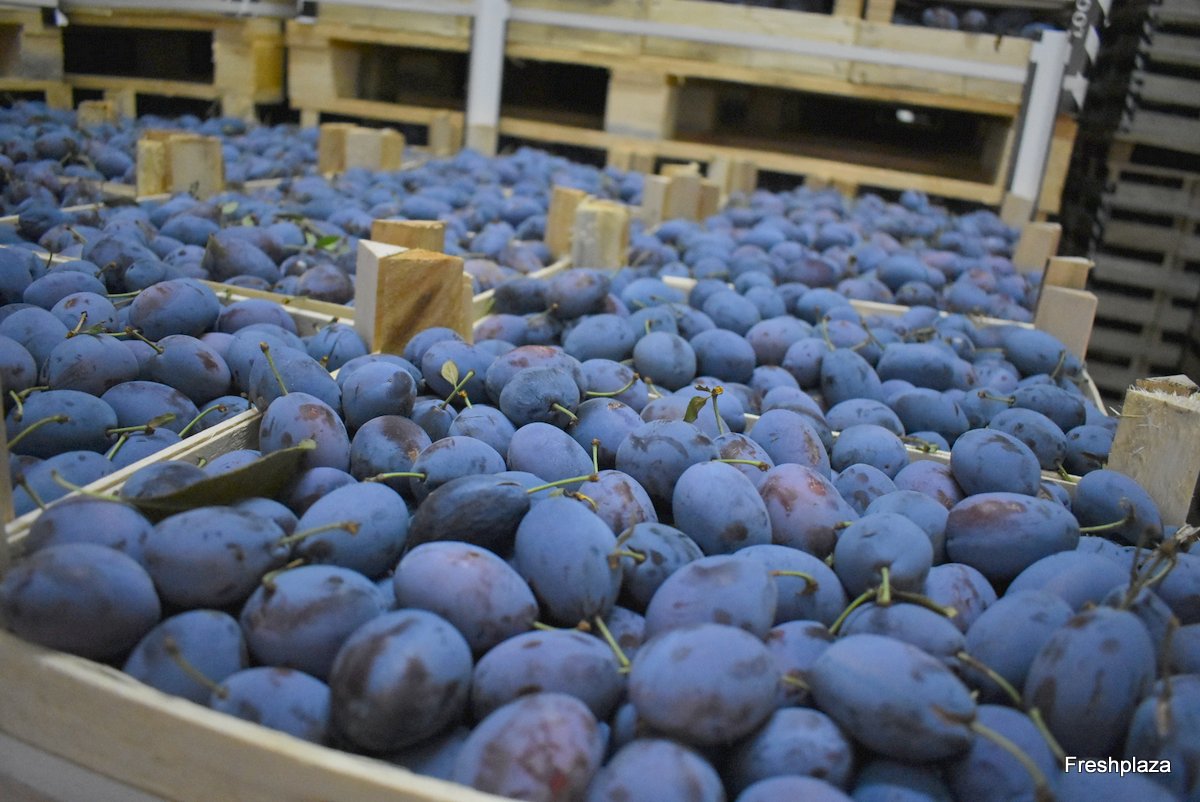 A recurring problem the other cultivation companies, already featured, keep raising is poor-quality water. Codru has solved this with reverse-osmosis water purifiers. "The water we draw from our lakes is too salty. But with reverse osmosis, we can purify 18m3/hour," Mihai concludes.

Codru ST SRL is a family business founded by Ion Chilianu, Mihai's father, in 1992. In the early years, the company played a supporting role for growers in the area. In 2000, they established their first orchards. Today, Codru has 300 hectares of intensive cultivation, of which 125 hectares are reserved for apples, 18 hectares for grapes, and the rest for plums, apricots, and cherries. Virtually all production is for export. Their Smartfresh cold storage facility has a capacity of 5,000 tons. There is a sorting line, albeit only for apples. In addition to growing fruit, Codru manufactures wooden crates too.