France: The traditional shallot of Brittany wants its PGI

Asserting the identity of the traditional shallot of Brittany, obtaining a recognition of its origin and quality in order to guide consumers, protect producers and maintain activity and employment in the region. This is the goal of the collective, which was founded in 2021 and now brings together all professionals of the sector. Determined to obtain the PGI recognition, the collective calls on public authorities and local elected politicians to mobilize in order to preserve the local know-how as well as the future of the industry. On the 19th of September, a visit was organized at a local farm and a packing station in order to raise awareness among elected officials about the sector’s challenges. 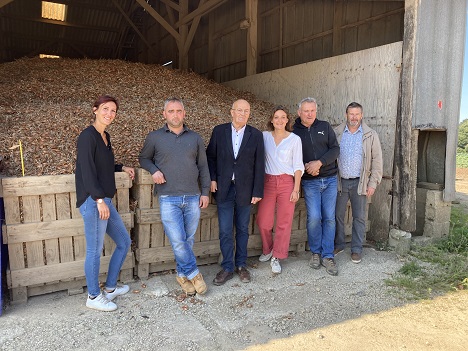 The traditional shallot, jewel of Brittany threatened by competition
Brittany is the first shallot producing region in France, producing only traditional shallots. The cultivation of shallots is labor-intensive. It involves 250 farms in Brittany as well as 15 trading companies, and it represents 700 direct jobs for planting and harvesting, 500 direct jobs for preparation, trimming, grading and packing.

The character and quality of the traditional shallot of Brittany are not comparable to those of other alliums grown from seed, thanks to the methods practiced generation after generation by Breton producers (respect of the bulb’s development cycle, manual planting and harvesting), and thanks to the soil and climate conditions specific to the area. But without official recognition of its origin and quality, the traditional shallot of Brittany must compete with echalions and other shallots grown from seed, which cost a lot less to produce.

A collective approach to defend the sector
Refusing to accept the disappearance of an age-old crop and determined to offer a future to the next generations of farmers, the collective has taken the initiative to structure itself, on the fringe of the existing professional cooperatives, in order to federate all the energies of the sector and obtain the recognition and adequate protection for the traditional shallot of Brittany.

Created just over a year ago in August 2021, the collective of the traditional shallot of Brittany brings together under the same banner all professionals of the sector: multipliers, producers, traders, processing plants. With 116 members, the association now represents more than 20,000 tons of shallots, which is 70% of the Breton production. 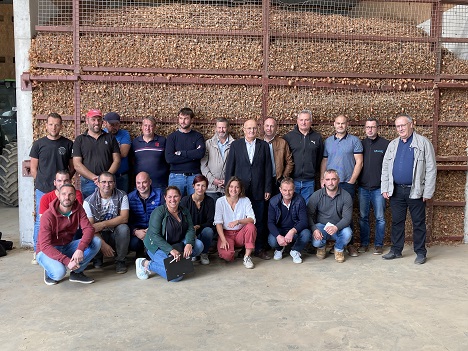 Preserving origin and quality through the PGI recognition
With this collective momentum, the association is committed to obtaining the PGI recognition which will help distinguish the traditional shallot of Brittany from competing products, for consumers, food professionals and mass retailers.

By setting up a PGI, the collective wants to have the name “Shallot of Brittany” recognized. The proposed geographical area covers all the municipalities of the Finistere and Côtes-d’Armor departments located at less than 20km as the crow flies from the coast (Channel or Atlantic Ocean). The soil and climate of the area are particularly suitable for the cultivation of shallots. Since January 2022, the members have been working together to define the specifications establishing the production conditions necessary to obtain the recognition.

Necessary mobilization of the whole country
This fight goes beyond the commitment of a sector. More broadly, it concerns the dynamism of the agricultural economy of Brittany, the preservation and transmission of age-old skills and the possibility of a future for the new generations of young farmers. It is therefore necessary to obtain the support of French elected officials. The appeal of the collective and the visits, on September 19th, to the farm and packing station, helped show to the public authorities and elected officials the reality of the profession and the need for this common fight.

“In this exciting adventure, the collective expects our elected officials and professional representatives to support this project with us,” explains Bernard Cadiou, president of the collective. “We are also encouraging all professionals of the sector to join the collective and participate in this project that aims to obtain the PGI Shallot of Brittany at first, followed by the Red Label.”