Luis Fernando Rubio, director of Procecam: "Ukraine's exit from the market has also had a noticeable impact"

The reduction of the onion acreage and the lower yields per hectare in Europe have led to a significant drop of more than 40% in the production available compared to a normal year. Spanish onions are experiencing a similar situation, and their sales have been going on at a good pace and with good prices since the start of the season.

"The 2022/2023 onion campaign has so far been very different compared to the previous one, which was really ruinous," says Luis Fernando Rubio, director of PROCECAM, the Association of Onion Producers of Castile-La Mancha. The demand is stable and the drop of around 40% in the onion production in Spain, as well as in the rest of Europe, is leading to an increase in prices." 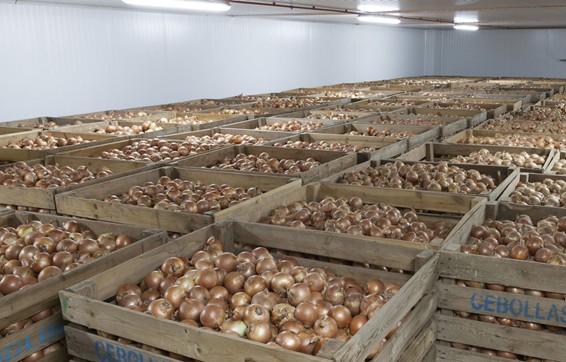 "Last year, prices did not allow us to cover the production costs, but this year it has so far been possible. In just one year, the cost of producing a kilo of onions has shot up to 25 cents. The large sizes are the most demanded, as they are the most scarce throughout Europe. In fact, it is going to be very difficult to find sizes between 60 and 80", said the representative of this association.

The harvest of the Grano de Oro onion, the one with the longest shelf life, is now in its final stages. "Although the rains in March and April prevented the onion from being sown at the usual time in Castile-La Mancha (the main producing region in Spain), the dry weather and abundant hours of sunshine that followed has not only brought forward the end of the harvest, but has also had a very positive influence on the conservation quality of the onions, and it has also had an impact on the sizes and yields," said Luis Fernando Rubio.

The acreage, yields and calibers have been reduced in all producing areas of Europe. The exit of Ukraine from the market due to the war has also had a noticeable impact and resulted in a below normal onion supply. "In recent years, the onion acreage had recorded a significant expansion in Ukraine, surpassing even that of Spain, so its absence in the market is being felt strongly. Its onions used to supply the Eastern European and Asian markets and had a good skin quality and flavor. Meanwhile, Romania's production continues to increase."

35-40% of the sales of fresh Spanish onions go to the domestic market and around 30% is exported, mainly to the United Kingdom, Germany, France, Portugal, Italy and Morocco, among other destinations. The rest goes to the processing industry.