Rubis Gold: The new yellow apple that “shakes up habits”

For the second year in a row, the Rubis Gold® committee - made up of the variety editor, the breeder and 5 operators (Earth Market, Zouk Bvba, the Seru Orchards, the Perlim-Meylim Alliance, Gerfruit, Blue Whale and the Devos Group) came together last Friday at the Perlim-Meylim orchards for a press day. After a presentation to promote the new variety, three visits of the orchards were organized, with a nice lunch under a big oak tree, which featured the new golden apple with ruby highlights. 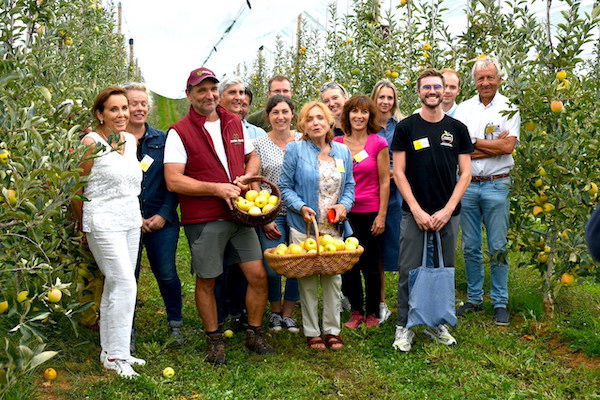 The Rubis Gold® committee with ANPP and producer David Hénocq

An apple that requires a high level of technicality
The Rubis Gold® adventure is first and foremost a story of men and women with solid experience in the apple growing sector who decided to gather around common values. To vibrate for innovation while following an eco-responsible approach and to have the patience to slowly fill together the blank pages of a book that remains to be written. Humility, cohesion and sharing between operators who are otherwise competitors are essential to make this atypical adventure one of the success stories in the history of the apple. It is an exciting adventure that is not without risk, since this new variety requires a high level of technical expertise to fully express its potential according to the land where it is grown.

"A desire for innovation is essential to embark on this Rubis Gold® adventure. It is also a costly adventure so for everyone’s interest, we do not take partners who consider themselves fragile into the adventure,” explains Jean-Christophe Bertin, director at Earth Market. 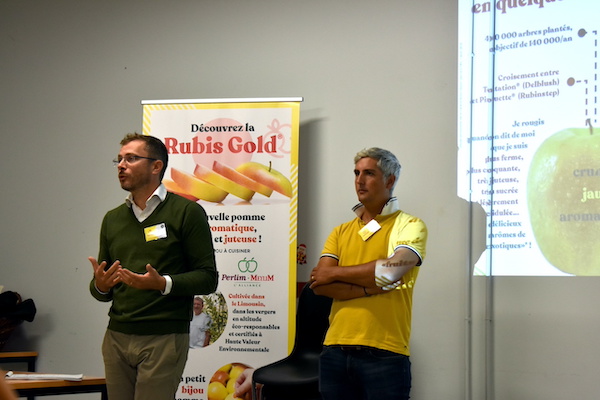 Passionate producers with a taste for innovation
David Hénocq, Jérôme Pinaud and Frédéric Champagne: three producers attracted by innovation who decided to embark on the adventure. True enthusiasts, they believe in the potential of this new variety which reveals more of its secrets daily. A choice validated this year by the nice quality of the apple, a high Brix degree, calibers that are larger than last year and a harvest that is taking place in excellent weather conditions. For Jérôme, the apple represents a “good compromise between varietal diversity and the production of a yellow apple.” And according to Frédéric Champagne, it is clear that consumption has evolved in recent years and that “consumers expect something different from today’s producers.” 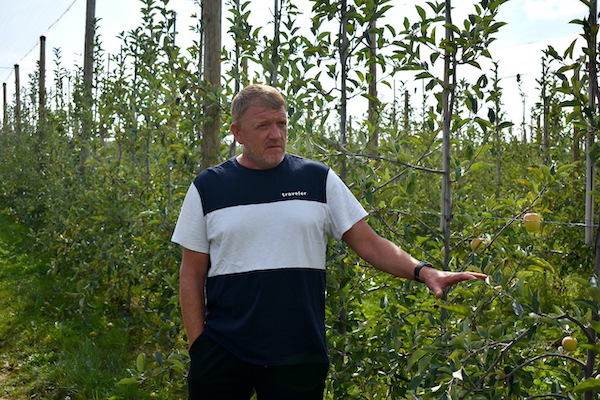 1,300 tons of Rubis Gold expected for the 2022-2023 campaign
Last year, 654 tons of Rubis Gold were harvested in France and in Belgium. The committee is expecting to put 1,300 tons on the market this year, and to reach 3,000 tons in 2023. So far, 400,000 trees have been planted on 140 hectares, and the operators involved in this adventure plan to plant 140,000 more trees per year to reach the objective of 500 ha in Europe by 2030. The variety is already available on the shelves from November to April, and the committee has plans to sell the Rubis Gold beyond the European borders once the volumes are sufficient. The new yellow apple has already proven its ability to preserve its organoleptic and visual qualities after several weeks on a boat. Jean-Christophe Bertin has shared that he is currently “in advanced discussions with some European operators.” 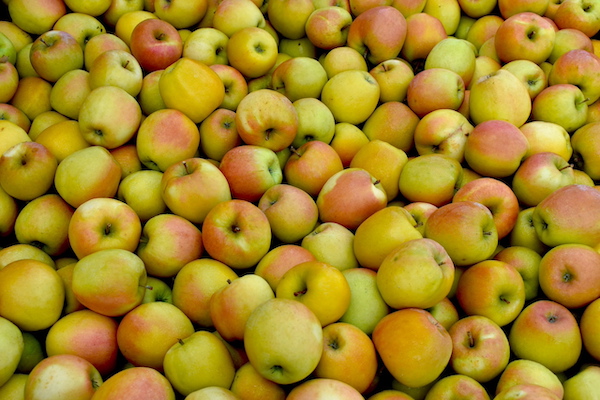 A new variety with a place on the market
The results promise to be as good as the efforts made, since the apple seems to present all the characteristics sought after by consumers: a good balance between sugar (Brix degree of 14/16.5) and acidity (malic acid: 4g/L), juiciness and firmness (7.5/8.5), which contrasts with the image that the general public usually associates with a yellow apple. The new variety completes a range of yellow apples that is currently under-represented. 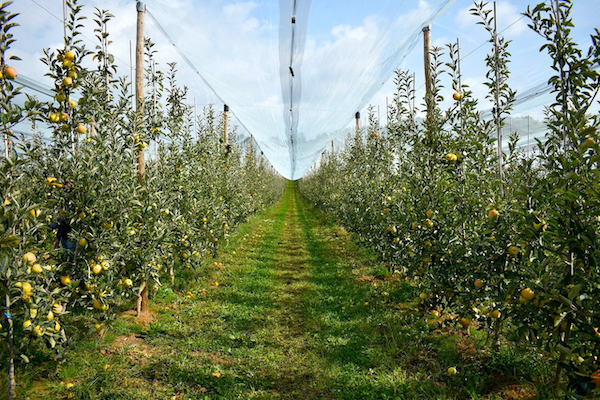 Planting some Rubis Gold®: an obvious choice for Perlim
As a cross between the Pirouette and Tentation varieties, the Rubis Gold® was an obvious choice for Perlim to plant in their orchards. “We were immediately attracted by the powerful taste of this new variety. Rubis Gold® is a yellow apple, a color that has been an integral part of our DNA since the creation of the cooperative in 1946 and our development around the PDO Golden du Limousin. With the Rubis Gold®, we bring varietal diversity to our offer while preserving our cultural identity. We are still in the process of discovering and getting a feel for how the apple will behave in our region. But the first harvests have confirmed our expectations: the variety is able to express its full potential in high altitude soils like ours. The temperature variation between night and day gives it, much like the Golden du Limousin, a nice coppery blush, more or less intense depending on the season. We chose to embark on this adventure because we believe in this apple and we are convinced that the Rubis Gold® meets a current need on the market. It is a modern yellow apple that fits with the expectations of the younger generations,” explains Béatrice Chauffaille, communication manager of the Group. 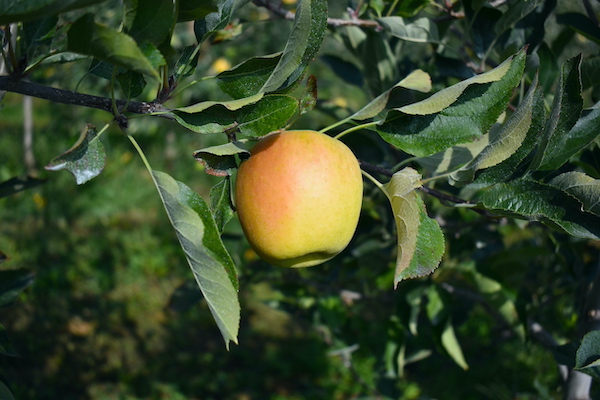 Rubis Gold® , ready to be picked

A variety to be worked with, not tamed
The potential is great but so are the challenges, especially in a context of climate change where seasons differ more than ever from each other. As everyone seems to be chasing time and wanting turnkey solutions that are easily replicable and productive quickly, the Rubis Gold® shakes up habits and reshuffles the cards by requiring patience and adaptability. “We will never finish learning about the behavior of a variety and this is even more the case for the Rubis Gold® which requires a certain finesse in terms of orchard management,” explains Gildas Guibert, variety developer for Earth Market. 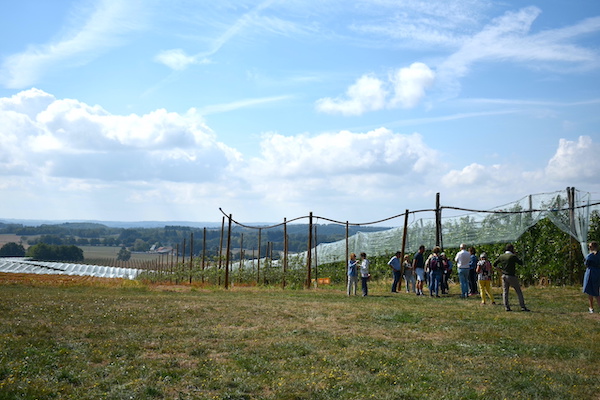 An apple sponsored by Grand Frais and Lidl Belgium
Being surrounded by the biggest producers is essential for success, but it is not sufficient. "The producer does not embark on the adventure alone. Of course, we have to secure the production upstream as much as possible, but also the marketing downstream.” The choice of stakeholders was therefore not limited to producers, but extended to the retail sector. Grand Frais, Lidl Belgium, Système U and others have been participating in the development of the Rubis Gold® for several seasons. The collective is grateful for this support, without which tree farming projects could not be established in the long term.

In order to maximize the Rubis Gold® 's chances of success, nothing has been left to chance in this rigorously meticulous organization, which nevertheless accepts to leave some room for the unknown. 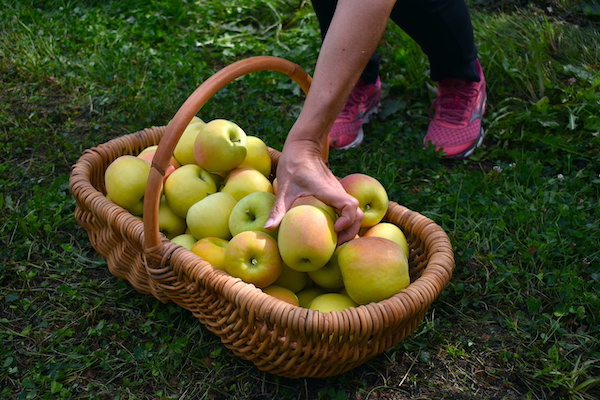