"Despite rising transportation costs, we want to keep delivery margins as low as possible"

Due to ongoing inflationary 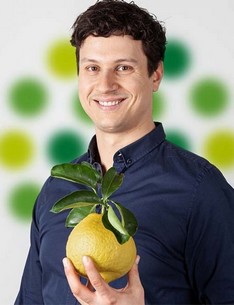 price increases as well as higher transport and operating costs, service delivery is coming under increasing pressure. The same is true for service companies in the fruit industry dedicated to the delivery of ultra-fresh fruits and vegetables. How to deal most sensibly with today's adversities is told to us by Valerio Petracca (r), who is a third generation manager to run the fruit trading company of the same name based in Pieterlen, Canton Bern.

Similar to other European countries, the Swiss fresh produce sector is facing today's challenges, Petracca says. "We supply our customers with our own fleet of vehicles, which nowadays numbers 30 trucks. The exorbitant diesel prices are forcing us to rethink our margins. Nevertheless, we try to keep them as low as possible so that our customers on the Swiss domestic market can also continue to operate competitively. Our new fresh food warehouse, which went into operation two years ago, is equipped with a large canopy. Thus, we were able to equip the entire truck parking area with photovoltaic panels at the cutting edge of technology. We are currently considering expanding our photovoltaic system again."

The new Petracca SA company warehouse, including the PV system.

Organic growth
Petracca SA was founded in 1968 and is now run by Fabio and Valerio Petracca, the third generation of the Petracca family. In addition to its headquarters in the canton of Bern, the family-owned company has locations in Turkey (Antalya) and Italy (Milan). "Our subsidiaries enable the parent company to react quickly and agilely to current developments in both fruit logistics and quality management. In recent years, we have grown in many respects, both purely in terms of sales and in terms of personnel. Apart from the capacity expansion at the main site in 2020, we have been able to hire six new employees in the last two years, all of whom are professional and responsible."

The Swiss company has a modern vehicle park.

Conventional products for the domestic market
Despite its modern capabilities in a total of three countries, the company's main focus will continue to be on supplying the Swiss domestic market, Petracca continues. "We have already received several export inquiries from France and Germany, but we are still focusing mainly on supplying the Swiss domestic market. We are also trying to simplify the ordering process for our commercial customers, in which we have already been operating a B2B online store for eight years."

According to Petracca, the same applies to the organic sector. "Until a few years ago, organic was one of our main focuses, but the approved plant protection products in the organic sector are being rapidly minimized, which in turn has made cultivation much more difficult, and this despite the fact that we conduct regular quality tests and residue analyses. I'm not saying we don't want to offer organic produce at all in the future, but for now we've put further expansion of our organic selection on hold."