Belgian mushroom growers are having a tough time at the moment. "The main issue is that no one knows exactly what things will cost next, or even this month. Energy prices fluctuate so much that no one knows where they stand. Add to that, things like compost, casing soil, personnel, and packaging price increases, and the story tells itself. We need stability to charge the correct prices. That goes for everyone, including suppliers and customers," says Paul Delbeke of Districhamp.

"As mushroom growers, we're unique in vegetable cultivation. We need a lot of energy all year long. We grow at between 17 and 18°C,  so, in the summer, we have to use cooling systems. But then, the cells' moisture shoots up, so you have to heat them too, to reduce that to normal."

"In the winter, that process is exactly reversed; the incoming air must be heated and simultaneously humidified with steam. That means each nursery uses plenty of power throughout the year, which, with current energy and other price increases, means cultivation costs up to €0.50 more per kg," Paul explains.

A small bright spot for Districhamp is that it uses a pull-through system. "That splits the cultivation, reducing the risk of disease. We never have to excessively steam the growing cells at the end of the cycle, so we can reduce energy costs somewhat." Still, Paul fears the industry faces choices.

"We had two nurseries but decided to stop with the second one a few months ago. We were supplying the industry in the Netherlands, but due to factors like too-high transport costs, an outdated facility, and erratic energy costs, we shut that site down. We decided to solely specialize further in the fresh market," he says. 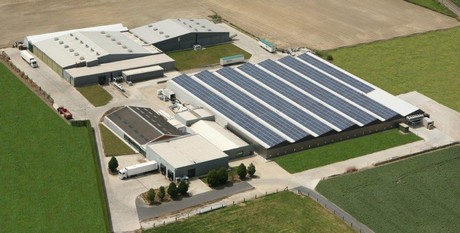 Demand is not suffering, though, says Paul: "There's obviously plenty of uncertainty, but demand has remained fairly constant. When the pandemic began, it spiked because more people were cooking at home. It was, however, somewhat irregular, and I'm glad the COVID-related pressure is over, hopefully, for good."

The grower also does not see mushroom farming ever disappearing. "There will always be growers, but the challenges are becoming increasingly large. You also have to deal with the competitive Poles who enjoy European subsidies but still use their local currency. They're thus in a more favorable financial position. The trick to survival is further differentiation. We want to keep doing that by, for example, automating harvesting even more. That helps the company stand out, and helps alleviate the labor shortage," Paul concludes.