"Products washed with peroxide have a longer shelf life"

It is pretty much established that hydrogen peroxide can greatly benefit cultivation. It is, however, relatively new in its use for post-harvest. Considering how crucial it is then to have a constant supply of hydrogen peroxide, HPNow has created an on-site hydrogen generator that creates ultra-pure levels of peroxide.

Right on-site
"Since it's generated on-site, there's no need to stabilize it," says Cord Nunez from HPNow. Hydrogen peroxide is a great oxidizer and, in very low concentrations in irrigation water, eliminates pathogens. "This is particularly important for those growers who recirculate their water," Cord points out.

The company has indeed worked on an indoor farm in northern Pennsylvania as the grower was having issues with Pythium. "Prior to operating with ultrapure and the HPGEN, they were experiencing up to 20% losses in summer months due to Pythium because of the contaminated recycled water," Cord explains. "So, once they installed our unit, and the grower started using peroxide for their irrigation. They reduced Pythium losses to under 1%. With the HPNow unit, they can keep saving up on the water use while keeping the quality of said water basically intact." 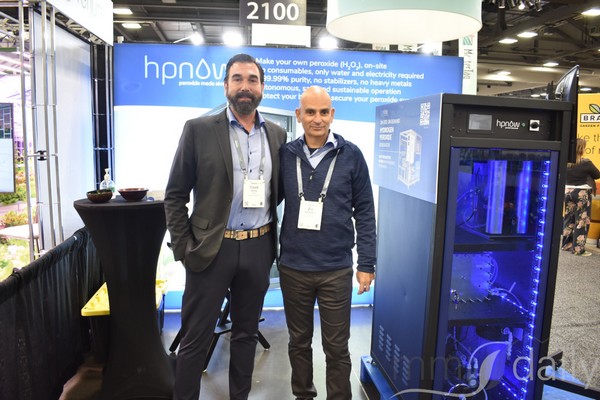 That is also particularly important for the long-term sustainability of the horti sector, says Ziv Gottesfeld, CEO of HPNow. "As water becomes scarcer and fewer sources are available, what water will be safe for cultivation in terms of biosecurity?" That is why HPNow solution is also suitable for open-field growers. "And since those growers mainly use over-head sprinklers to irrigate, there are big chances that plants get contaminated with waterborne pathogens." Two units are indeed going to be installed in California-based wineries, for instance.

Hydrogen peroxide for post-harvest
At the same time, a novel application of hydrogen peroxide can greatly increase plants' shelf life. "Currently, post-harvest treatments with wash systems are mainly done with chlorine," Cord explains. "The problem is that chlorine leaves some residues behind, but also an undesirable smell. Using peroxide, on the other hand, has a lot of benefits."

HPNow did many case studies to better understand how peroxide can be a more efficient solution for post-harvest treatment. "We have seen that products washed with peroxide have a longer shelf life, as all bacteria and pathogens are completely eliminated. This solution is currently being used in a project in Pennsylvania, and they have seen how no residues are left behind. Of course, you need to rinse the container before the next treatment."

Ziv continues to explain that the company will continue to focus on peroxide generations, "and we have several new applications we are testing. The bottom line is to provide growers with increased autonomy. It doesn't matter what they grow, be it tomatoes, cannabis, or gerbera – the benefits of using pure peroxide to clean irrigation water are visible, both during the cultivation and in the post-harvest treatment."