"For the first time ever, our company is turning its gaze on the EU market"

For the second part of our Moldova special, we visited the family business, SV Fruct. No fewer than four sons support the family patriarch in the daily running of the company. Two of them, Vitalii and Victor, spoke to us. Like Vilora, the first cultivation company featured in this series, the Scutaru family's farm is located in the north of the country. But before we get into the ins and outs of these apple and cherry growers, let us give you some Moldovan fruit production and export figures. Then you can place the stories against a broader background. 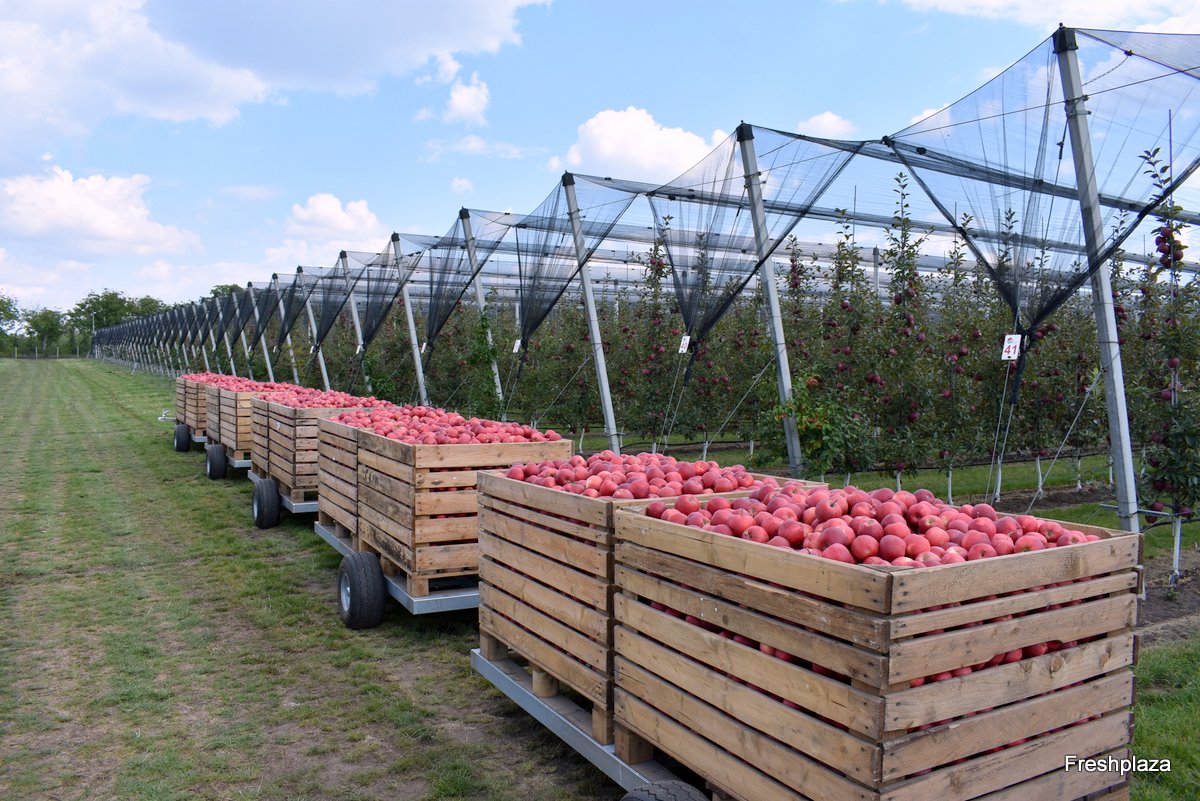 For these figures, we refer to an article compiled by Jan Kees Boon of Fruit and Vegetable Facts. It covers fresh fruit and vegetable cultivation, export, and import in Southeast Europe for 2021 and was published on agf.nl on September 7. Jan took a closer look at 13 countries (ranked by population): Romania, Czech Republic, Hungary, Serbia, Bulgaria, Slovakia, Croatia, Bosnia, Albania, Moldova, Slovenia, North Macedonia, and Montenegro. He excluded Greece and Ukraine. 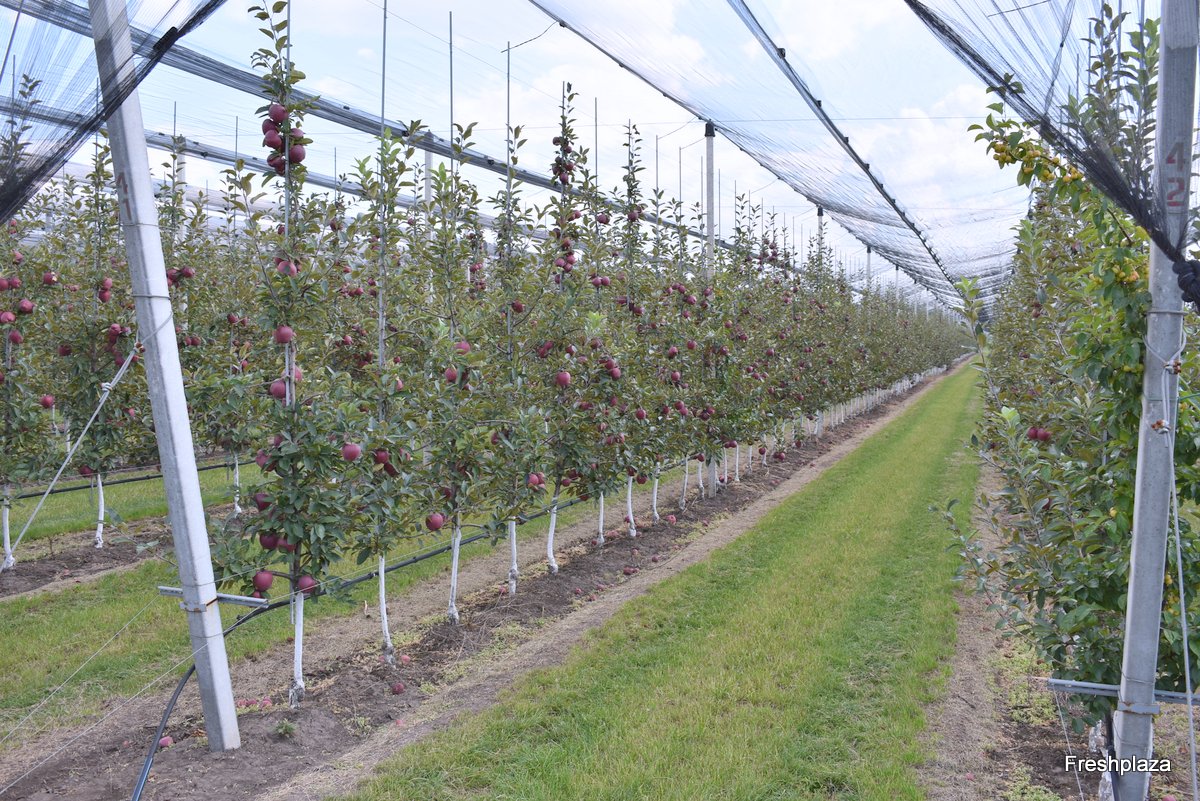 Most orchards are still very young

Little brother
It is immediately evident that Moldova is one of the region's smaller brothers. All the more remarkable then that the country is the list's second-largest fruit and vegetable exporter, trailing only Serbia. Plus, Moldova and one other country, North Macedonia, are the only ones that export more fruits and vegetables than they import. Fruits AND vegetables? That is stretching the truth a bit. The data shows the country sent a paltry 2,000 tons of vegetables abroad but no less than 299,000 tons of fruit. Fruit, thus, monopolizes Moldova's fresh produce exports. If you exclude vegetables, Moldova even outperforms Serbia. This little brother thus packs a big punch when it comes to fruit exports. 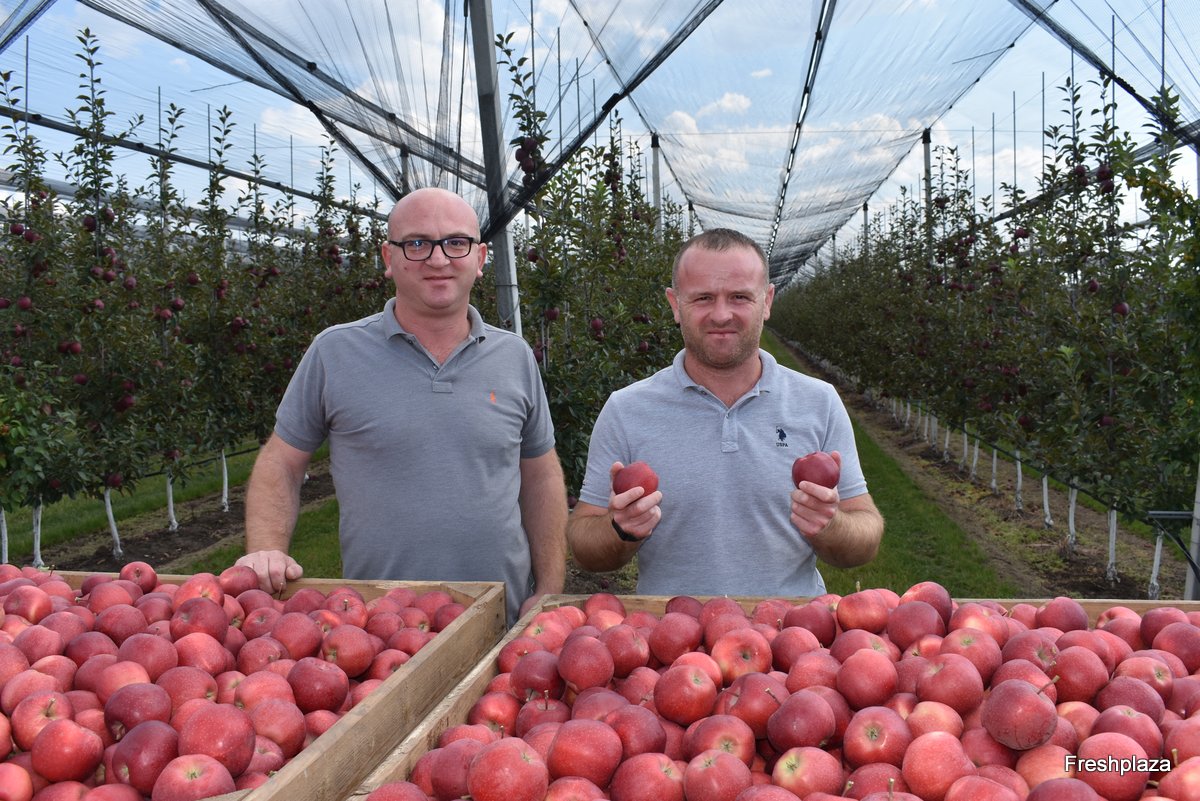 It's all about fruit
Looking at cultivation figures, fruit also clearly dominates with 676,000 tons versus 138,000 tons of vegetables. Of the 12 other Southeast European countries, little Moldova only has to bow to Romania and Serbia when it comes to growing fruit. And mention fruit in Moldova, and everyone refers, first, to apples. With no less than 500,000 t, apples account for 75% of the country's fruit yield. Stone fruit, grapes, watermelons, and soft fruit follow at a distance.

Logically, apples also take the top spot in exports: making up two-thirds of that fruit pie. Some 40% of Moldova's apple crop finds its way abroad. Until recently, 95% of that was sold on the Russian market, as the Moldovan Minister of Agriculture pointed out in early August. So, few apples reach other markets; and certainly not the Western European market. According to Eurostat stats, Moldova exported 54,000 tons of fruits and vegetables to the EU. Of this, 28,000 tons were stone fruit, 17,000 tons were (fresh or dried) grapes, and a meager 1,000 tons was top fruit. 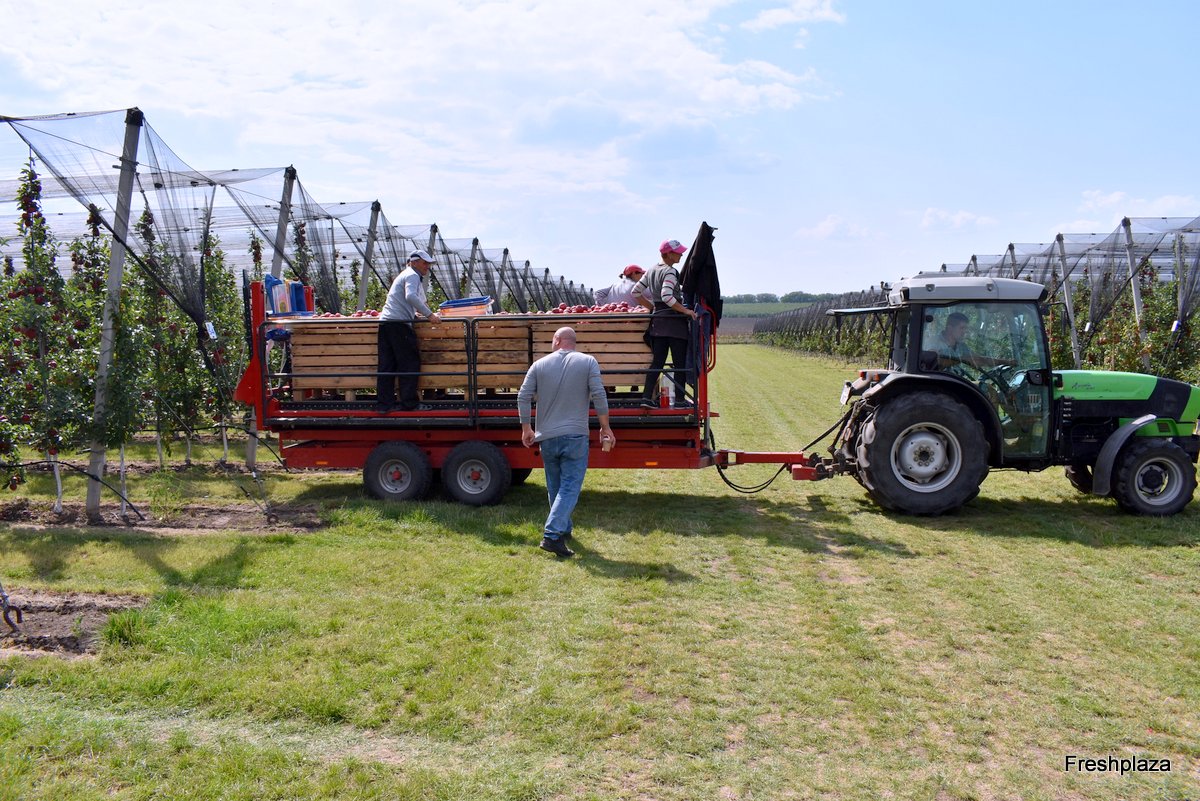 The country imports fresh produce too, but in far smaller quantities than it exports. It brought in 124.000 tons, of which more than half were tomatoes, bananas, watermelon, and mandarins.

In summary: Moldova is the largest fruit exporter of the southeastern European countries mentioned. It owes this largely to a single crop and destination: apples going to Russia. That makes it all too clear that losing that market is a huge blow to Moldovan apple growers who focus on exports and the country's fruit sector in general. 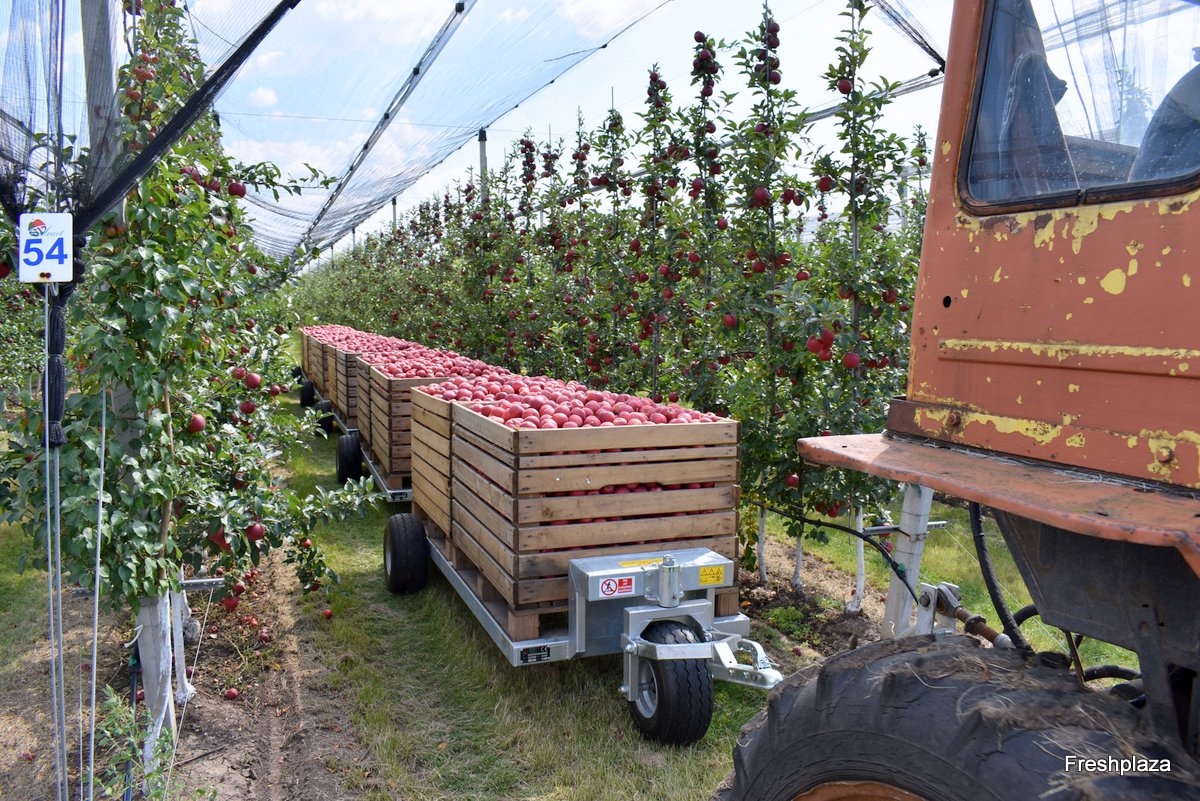 First to be GlobalGAP certified in Moldova
Over to today's story: the Scutaru family business. As mentioned, Scutaru senior is assisted by his four sons, suggesting that the older man began the company with his sons gradually joining. Not so. "The whole family founded the cultivation company," Vitalii begins. "That was in 2003. My brother Victor and I were fruit traders and got the idea to sell fruit we'd grown ourselves. When the time was right, we all did our share to get the business started." 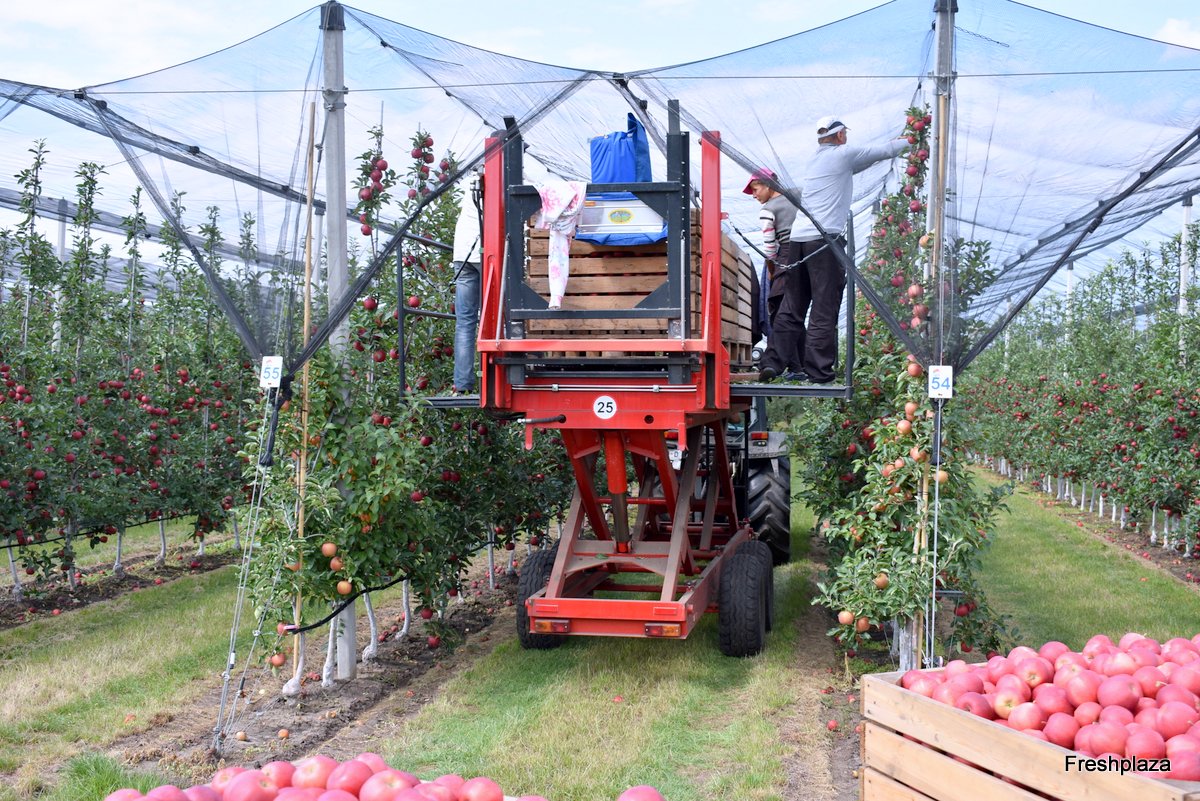 A platform is used to pick the apples on top

These days, SV Fruct cultivates apples on 47 hectares and cherries on ten hectares. Twelve years ago, it built 14 storage cells of 682m3 each with a total capacity of 2,000 tons. These cells use Smartfresh technology. The following year 'Scutaru Victor', the official name of the company, became the first fruit company in Moldova's history to become GlobalGAP certified. SV Fruct sorts and packs its fruit - in open-top boxes, although they are now considering bushels - in its own packing station. They sell the entire harvest on the foreign market, either through direct exports or third-party sales. "That depends on the prices we can get for our product," says Victor. They recruit most of their customers through contacts at international trade shows. 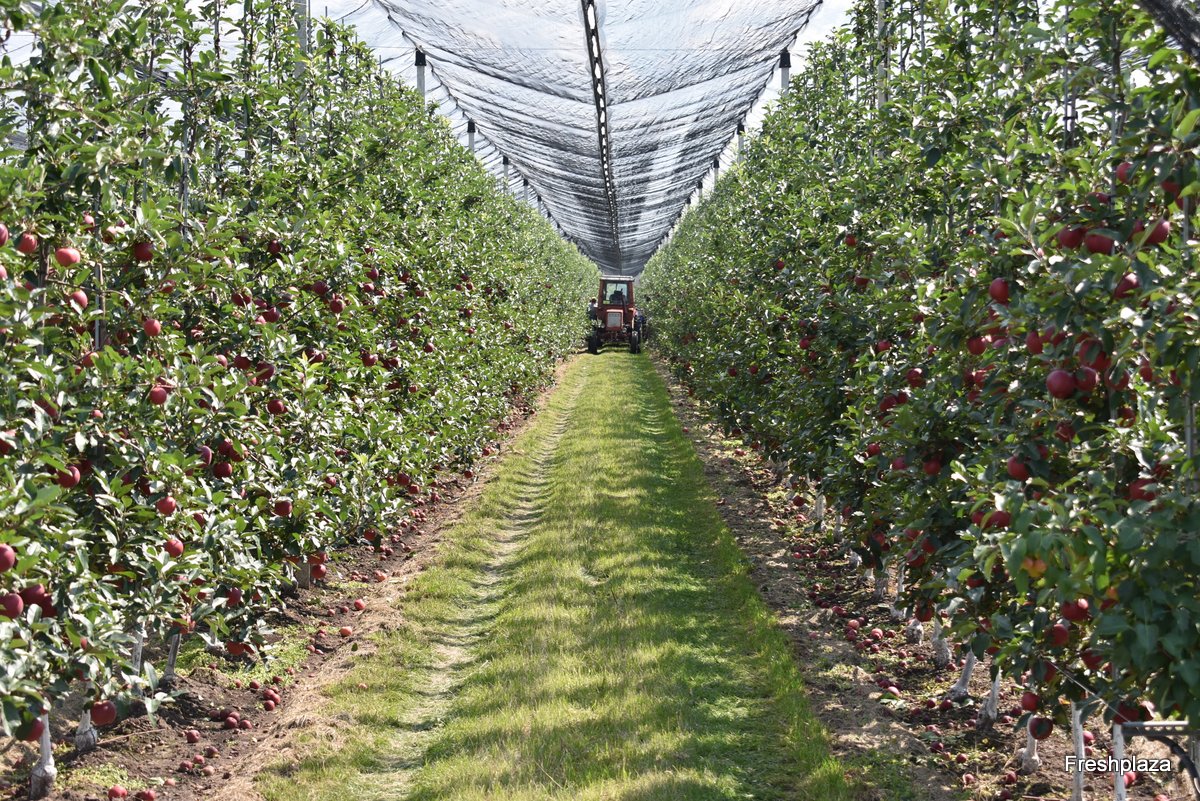 Everything is covered in hail nets and protected against sunburn

Renewed varieties for new markets
In the company's early days, they exported solely to Russia and, until 2009, purely traditional, heritage varieties. But then everything changed, and the focus shifted to modernization. A gradual shift in cultivation from old to new varieties preceded the storage cells' construction. Just last year, a 2.3-hectare plot was planted with Devil Galas, and this spring, an entire orchard was grubbed up and replanted with Galas Shnicored. This variety renewal is being done with a view to tapping into new markets, including the Middle East and Asia. Each of these destinations has its variety preferences. For the time being, there are no SV Fruct apples on the Western European market. 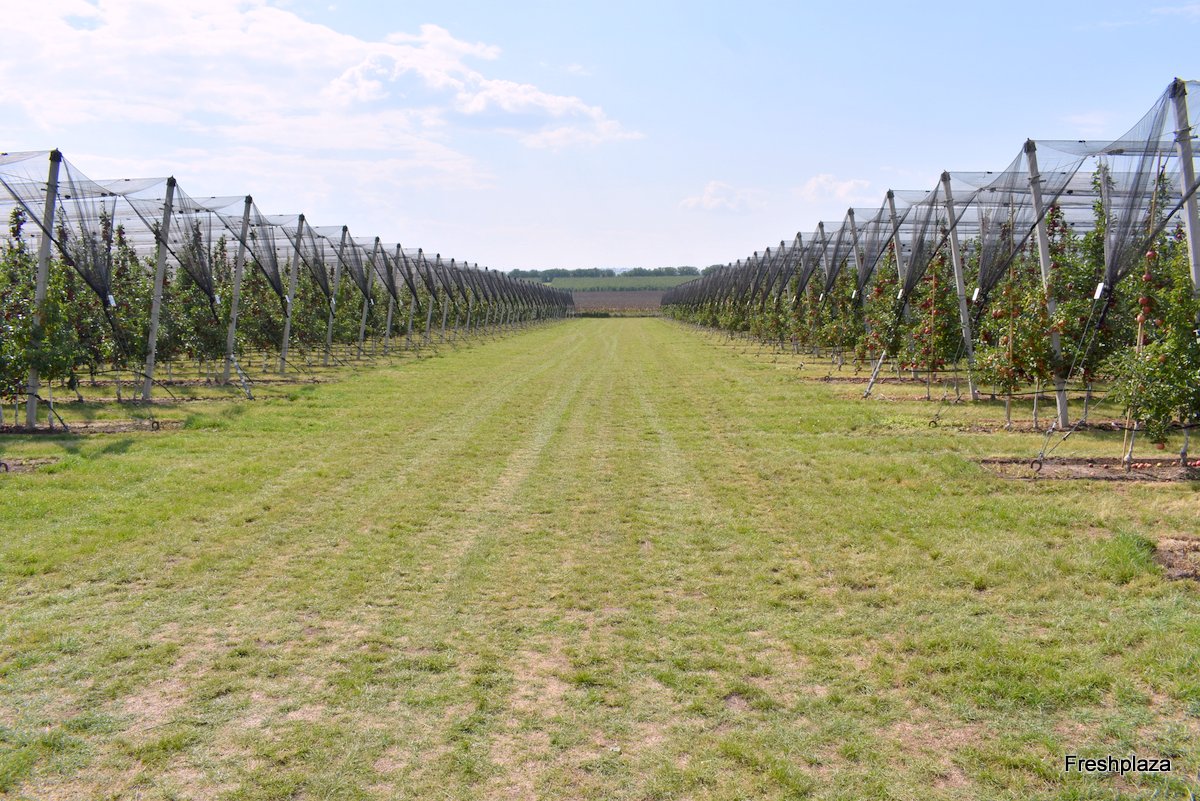 This company has no fewer than 15 varieties growing in its orchards in northern Moldova. Those include Empire, Braeburn, Jonagold, Ruby Star, and Fuji. "We also work with Belgian and Polish propagation companies who test apple as well as cherry varieties in our orchards. We currently have a variety that's not yet registered in the EU. It looks very promising," says Vitalii, who adds that red-striped blushed apples are particularly popular in the local market. "The fruit has to look attractive. That seems to be even more important here than flavor. For our export markets, quality takes precedence. We, therefore, attach great importance to that."

Moldova's apple growers are starting to unite
Moldovan growers harvest about 500,000 tons of apples annually. Poland does 4.5 million tons. "They're our biggest competitor," Victor admits. "They have higher yields, better logistical possibilities - because of location and more modern infrastructure - more advanced orchards, and lower production costs. That may sound strange, given our low land prices and salaries, but Polish growers receive more subsidies. And, for storage and marketing, they can rely on large cooperatives. That reduces costs."

"Moldova is catching up with the help of the World Bank program, but there's still a long road ahead. The program grants $300,000 or 50% of the investment, to set up a cooperative between at least five growers. But it's all still small-scale. Still, most survive. At least for now. Most apple growers in Moldova still have old orchards and only sell locally. We, on the other hand, only export. Moldova imports Polish apples, by the way. These are often more expensive than the local product, but they look nicer." 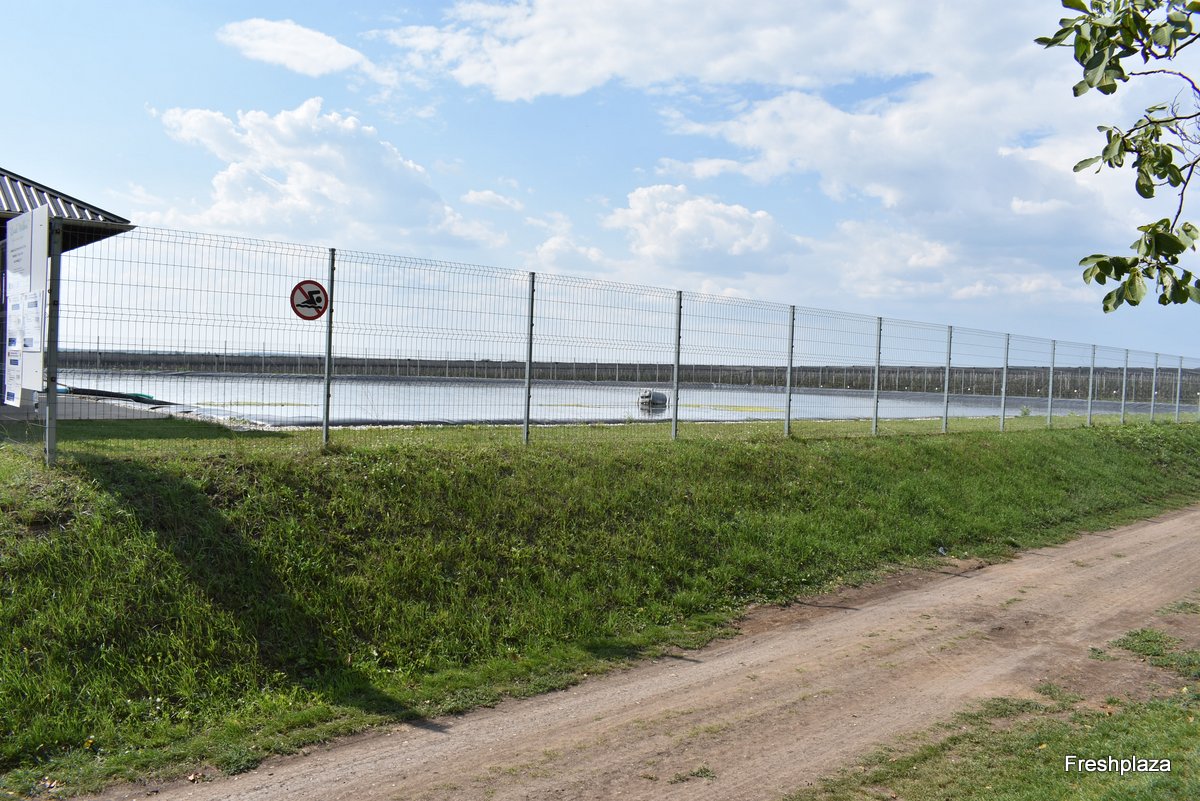 On to the EU?
SV Fruct is gradually transitioning to super-intensive cultivation. Vitalii explains that one of the advantages is the savings in crop protection costs. "Last year we spent €150,000 on those products, this year it's been €50,000 less. And the yield is the same. That's a significant gain. But we've had that big turnaround now. We don't want to expand further too soon; 2,000 tons a year is a nice quantity. We will, however keep professionalizing and modernizing."

"Although, presently, our entire focus is on sales because we're suddenly faced with a whole new challenge. Russia has disappeared as a destination market, so we have to find new buyers. Hopefully, we can continue selling all our apples on the fresh market and won't have to divert anything to the processing industry. So we are, for the first time ever, turning our gaze onto the EU market," concludes Vitalii.