On September 8-9th, the tomato producers of Légumes de France organized an action to denounce the over-representation of tomatoes imported from Morocco on French supermarket shelves, as well as the weaknesses in regulation regarding consumer information on the origin of these products. Faced with a situation of unfair competition, the producers call on the French government to provide clear support, particularly in view of upcoming key European legislative deadlines.

In crisis throughout the month of August, the French tomato sector has suffered from insufficient sales to clear their stocks. This year's volumes were already very high due to a shift in the production peak, and the increasing number of home-grown tomatoes have also reduced supermarket purchases.

The prices were adjusted downwards, but this was not sufficient to revive the market despite the weather conditions that were favorable for tomato sales. In this context, the presence of merchandise from Morocco in the stores has become less and less bearable! Benefiting from very nice customs regulations granted by the European Union, Moroccan tomatoes are still found on French supermarket shelves even when the French sector is at its production peak.

On the French market, tomatoes from Morocco represent 63% of the imported volumes, most of which are imported during the French production peak. From March to August 2021 (see graph below): 130,000 tons of Moroccan tomatoes were imported to France! 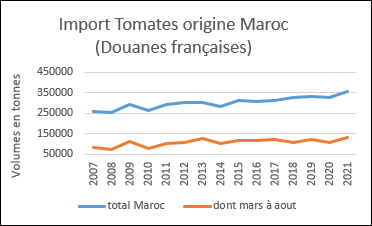 Unfair competitive disadvantage for French producers
Unsurprisingly, labor costs for Moroccan producers are extremely low, which enables them to offer their products at prices that defy all competition. In Morocco, the minimum gross hourly wage is 0.69€ [0.70 USD], costing the employer 0.74€ [0.75 USD]. The difference with France is 12.40€ [12.59 USD]!

Moroccan producers also benefit from strong support from the Moroccan government (through the "Generation Green" program), as well as financial support from the European Union and the French Development Agency (AFD). The World Bank is co-financing the national component of the program (250 million USD), and the European Union supports the most innovative actions and technical assistance through a grant of 20 million euros [20.30 million USD] delegated to AFD.

In comparison, the implementation by FranceAgriMer (Ministry of Agriculture) of a program in January 2022 to help French producers with their investments for greenhouses, tunnels, agricultural tracks, or protection against weather hazards has mobilized 10 million euros [10.15 million USD]...

Far from exemplary production conditions…
Morocco benefits from favorable weather conditions most of the year, but the country has also been suffering from increasingly severe droughts, especially since the beginning of 2022. The production of Moroccan tomatoes, therefore, requires a lot of water, and seawater desalination plants must be constructed to make up for the country's lack of water resources. However, the rejected brine presents environmental risks.

The European regulation INCO, regarding consumer information on food products, defines the conditions for labeling and the notion of indicating the product's origin at the European level. This regulation specifies that the mandatory indication of origin on a tray of cherry tomatoes must be at least 1.2mm. But 1.2mm is not enough for a consumer to clearly identify the Moroccan origin of a cherry tomato tray!