"Consumers are looking for options and convenience. This is the first greenhouse offering of its kind in the marketplace, and it's packed with flavor. It's ideal for gatherings, snacking, and a great option for back to school," says Windset's Ryan Cherry.

The launch also comes ahead of upcoming holidays, including Halloween. "Halloween is on the way with parties and get-togethers, and there is no better time to bring our shelf-stable Greenhouse Party Tray to market," says Cherry. "The timing was important, identifying periods that it could be introduced at retail and have additional promotional opportunities for high traffic holidays."

Unlike pre-cut vegetable trays found in the grocery store, the Greenhouse Party Tray can sit at ambient temperature.

In terms of supplies, greenhouse vegetables will transition to growing regions this fall. "Canada is still in full production through October and into the first half of November depending on weather," says Cherry. "Domestically, we're going to see continued year-round production in California with Mexico also starting to ramp up production over the next several weeks." 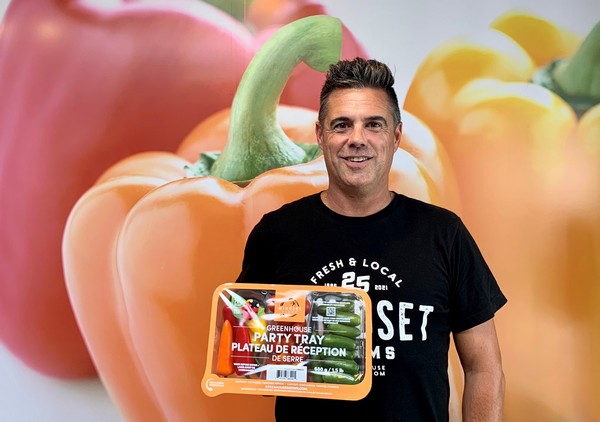 Ryan Cherry says the timing in introducing the Greenhouse Party Tray was important.

Tomatoes: Demand has been lighter for tomatoes, which is typical for this time of year. "It's the end of summer, and people still have backyard garden options," says Cherry, noting that demand will pick up with fall routines coming back. "You're also going to see a lot of regional transitions with Canada coming out of production and Mexico ramping up for winter supply."

Pricing on tomatoes has been static. "For the most part, prices have remained consistent across most commodities through much of the summer," says Cherry.

At the end of the month, Windset is also introducing a new black cocktail tomato, YOOM®, that is well-balanced sweet, and savory to taste.

Cucumbers: Supplies in the West have been steady with good demand. "Though shorter days and crop transitions will leave some gaps on both Long English and mini cucumbers," says Cherry.

This comes following a higher cucumber market this summer. "We are seeing quotes coming out of Spain, so there is definitely a gap on Long English with higher prices being quoted in Eastern U.S. markets. Seeing Spanish fruit is not uncommon in September and October but a few weeks ahead of what we would normally expect," he says.

Peppers: Pepper supply is also good. "Going into the fall, we will see a higher percentage of off-size fruit and harvest-type packs, not quite the heavy flushes that we're used to seeing through the spring and summer," says Cherry. "Supply is good, and we'll see a changeover in promotable SKUs--going into a 2 lb. off-size bag vs. a 3 or 6 CT #1-grade bag."

Pepper pricing has been consistent this summer. "Overall availability has been strong, with some production overlaps between Western and Eastern producers," says Cherry. "With peppers, you do expect to see those gaps and flushes in production, so overall demand can quickly change week to week."

Going into the fall, demand is anticipated to increase for greenhouse vegetables with more promotions on deck.