Process underway of getting Australia's new strawberry varieties to market

Hort Innovation is looking for a commercial partner for its two new home-grown strawberry varieties, Pink and White, with an aim to get them to market as quickly as possible.

Chief Executive Brett Fifield says after an eight-year breeding process, the new varieties were announced at last month's BerryQuest. The next step will be licensing and building up crop volumes, which will likely take at least 18 months. An expression of interest process is underway and will close in late September.

"This is something that we have done in strawberries previously, so this is a path worn for us," he said. "We want to get them out into the hands of the growers who pay a levy to grow the varieties through Hort Innovation, so it'll be a circular economy when it comes to plant breeding and who gets the benefit. The process of finding partners is one where we look at all options and take into consideration the variety and strengths that each potential provider has. Getting them out to growers quickly but making them available to as many as possible is essential. This is a milestone after eight years, but be mindful of the time it will take to get them into the hands of the growers - we are working as quickly as possible." 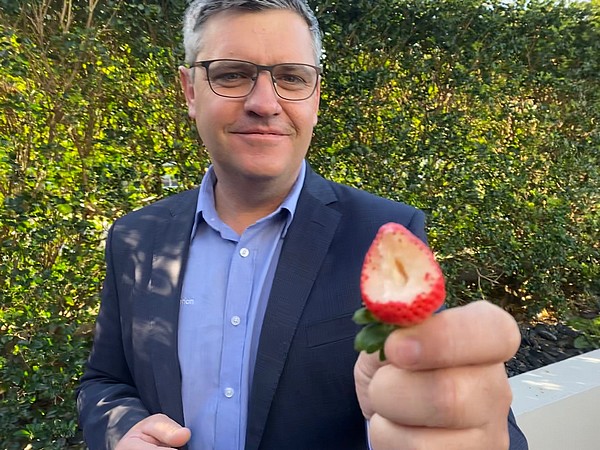 Mr. Fifield added that finding new varieties is key to the growth of the berry sector and that another aim of the Pink and White strawberries is to increase the purchasing choices available to consumers and growers alike.

"We have seen the importance that genetics plays in not only improving productivity but also the quality and meeting the consumer demand," Mr. Fifield said. "So, the challenge with all types of berries is making sure that what we produce lines up with consumer expectations and that we continue to supply around the seasonality requirements for not only growing but having regular traffic on the supermarket shelves. Giving consumers a choice and importantly value when it comes to plant breeding."

R&D and Commercialisation Manager at Hort Innovation Australia, Vino Rajandran, says these varieties will complement the red strawberries, rather than replace volumes already on the market, and grow the berry basket.

"There are a few things that we have to look at, and one is protecting the varieties and making sure that they are safeguarded," he said. "The second part is category development, which is a key part of strawberry growing. So, we want someone who can grow this category to include this novel type of light pink and white strawberries. The third part is direct marketing not only to the consumers but promoting the varieties among growers to support them to adopt them. We are ultimately looking for someone who can deliver all of these aspects. But this breeding process wasn't about replacing the red varieties or anything like that. It is to complement the current offering to give more choices." 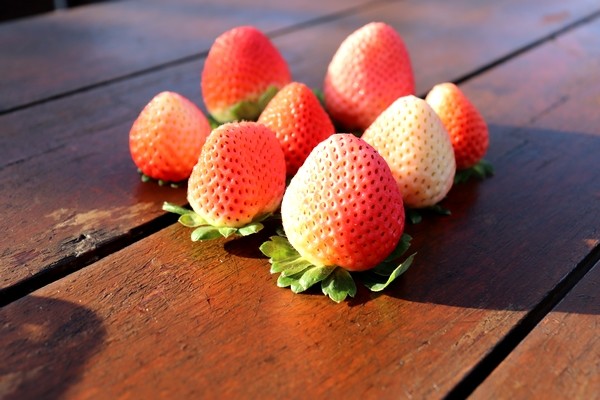 The new strawberries are the first 'novelty' varieties to be developed and commercialized through the Hort Innovation and Department of Agriculture and Fisheries (DAF) QLD partnership. DAF project lead Dr. Jodi Neal says it is not just appearance but taste that sets the two varieties apart.

"One is a pink or a blush variety, which has a beautiful peach-colored blush on the outside, where the sun hits it, then it's like a creamy white underneath and pure white inside," she said. "The second variety is more like white, with just a pastel pink blush on the side. Both taste amazing, and they are really sweet and have tropical, almost pineapple overtones, which come from the naturally wild great-grandparents, the species that we got from Chile - and they have added these wild flavors, which have come into these varieties. There are a number of white varieties internationally. White strawberries are huge in Japan, but they don't have the characteristics of Australian production. We have to have robust fruit that travels a long way. So, we also needed fruit that was going to be profitable for the growers."

The main factors the researchers considered when breeding the new varieties, from a grower's perspective, were the shelf life and transportability to ensure the strawberries remained fresh for longer, adding that the driving factor behind these varieties was to give consumers a choice.

"At the moment, there are many different strawberries sold every day, but they are marketed across Australia as just strawberries, and there are no variety names on the punnets," Dr. Neal said.

"What we wanted to do was have something that looked and tasted different, so the consumers can choose, whether it be the color or the flavor, or they can even mix and match. But we also wanted to have a high yield. We want to have consistent fruit shapes so that they can pack easily and are attractive. A lot of people ask if these varieties are genetically modified, and the answer is no. They are produced by traditional breeding methods, using cross-pollination; we take pollen with a paintbrush and brush it from one flower to another. We took the white genes from a wild strawberry and crossed it until we got the traits that we wanted - so it is all-natural. There is potential for it to be year-round, it has been trialed in Queensland and Victoria, and we are seeing how it goes down south, which could give us 12 months of the year, but we are working on other varieties for all climates, these are just the first two off the rank."